The Chinese People’s Liberation Army Air Force will deploy strategic bombers and strategic airlifters in addition to fighter aircraft during... 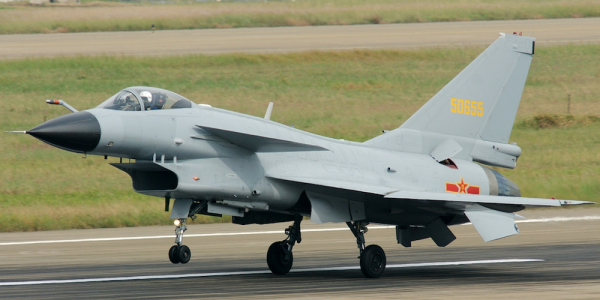 The Chinese People’s Liberation Army Air Force will deploy strategic bombers and strategic airlifters in addition to fighter aircraft during a massive military exercise in Russia.

While the International Army Games on July 28 will also include warplanes from Belarus, Azerbaijan, Kazakhstan, Armenia and Iran, Beijing hopes to use the exercise to boost its military ties with Moscow. Russia and China are growing closer together as they form a strategic partnership to counter American dominance of the international order.

“The Chinese People's Liberation Army (PLA) air force will send H-6K bombers, J-10A fighters, JH-7A fighter-bombers, IL-76 and Y-9 transport aircraft, and a team of airborne troops to Russia to participate in the International Army Games,” the Chinese Ministry of Defense said in a press release which was also released by the official Xinhua new service .

“The International Army Games 2018, initiated by the Russian Ministry of Defense, will start on July 28. It is co-organized by China, Russia, Belarus, Azerbaijan, Kazakhstan, Armenia, and Iran. It will be the first time that H-6K bombers and Y-9 transport aircraft have gone abroad to take part in military competitions.”

Related: China Dropped A Naval Diss Video Because The U.S. Didn’t Invite Them To RIMPAC »

According to the Chinese Defense Ministry, the massive multilateral exercises will help the Chinese PLAAF to increase its operational effectiveness.

“Participation in the International Army Games is an effective way to improve fighting capabilities under real combat conditions,” read the Chinese MOD/Xinhua release.

“The troops will strengthen military training and war-preparedness to improve their ability to safeguard China's sovereignty and territorial integrity.”

One of the major goals for the PLAAF for this year's exercise is to gauge how far Chinese airpower has come along. China hopes to not only measure its capabilities against the best of Moscow’s air assets but the PLAAF also hopes to learn how to best use its strategic bombers and other advanced air assets from the Russian Air Force, which has much more recent combat experience and far more expertise.

“It is really difficult to know how big the gap is between the Chinese aircraft and the ones used by overseas air forces without joining overseas exercises like this,” Yue Gang, a retired People’s Liberation Army colonel, told the South China Morning Post.

“So the aim is to learn from the advanced bombers of Russia.”

Developing China’s strategic bomber and strategic airlift capabilities are going to be crucial to the PLAAF as it transitions from an air arm designed to operate locally to a global force. The PLAAF’s strategic bomber force is also particularly important for its anti-access/area-denial strategy, which is designed to keep U.S. forces out of Western Pacific. And though the Xian H-6K is based on the venerable 1950s-era Tupolev Tu-16 Badger, the modernized jet is still a force to be reckoned with.

The H-6K—which is a highly upgraded Chinese copy of the antiquated 1950s-era Soviet-built Tupolev Tu-16 Badger—is the PLAAF’s mainstay bomber. But while the Badger design is a Soviet-era antique, internally, the Chinese H-6K is a modern aircraft with a much-improved airframe, sensors, and propulsion.

The new H-6K variant replaces the old Xian WP8 turbojets found on previous H-6 versions with new Russian Soloviev D-30-KP2 turbofans. The D-30 low bypass two-shaft turbofan—which some might call a leaky turbojet—has been modified for use on a number of applications ranging from the Mach 2.83 capable Mikoyan MiG-31 Foxhound interceptor to the Ilyushin Il-76 military transport to the Il-62 airliner to the new Xian Y-20 strategic airlifter. While the D-30—having been originally designed to power the MiG-31—is not an ideal engine for a subsonic bomber or transport aircraft, it is an enormous improvement over the primitive WP8 turbojets that were originally installed on the H-6.

With the new non-afterburning D-30 engines installed in combination with the new composite materials used in the airframe, the H-6K bomber’s range is increased by some thirty percent over previous H-6 variants. The modernized bomber now has a combat radius of roughly 2,200 miles. Avionics-wise, the H-6K dispenses with steam gauges and incorporates a full glass cockpit. The bomber also incorporates a new long-range surface search radar and an electro-optical targeting pod to find its targets.

Unlike previous iterations of the Badger, the H-6K was designed primarily as a cruise missile carrier. The jet can carry six CJ-10K or YJ-12 long-range land attack and anti-ship cruise missiles on its wing and potentially several more inside its weapons bays. It is also thought to carry a host of precision-guided weapons. That makes it a threat to not only U.S. and allied shipping, but also land bases.

The CJ-10K land-attack cruise missile has a range of over 930 nautical miles and carries a 1,100-pound warhead. The weapon—which draws heavily from the Soviet-designed Raduga Kh-55 cruise missile that China acquired from Ukraine—has many of the advanced features found on the American Tomahawk and the Russian Kalibr. Indeed, the CJ-10K guidance package is thought to include a combination of inertial navigation system, satellite navigation, terrain contour matching and digital scene-mapping area correlation. There is also a YJ-100 anti-ship variant of the missile that has a range of about 430 nautical miles.

“The YJ-12 poses a number of a number of security concerns for U.S. naval forces in the Pacific and is considered the ‘most dangerous anti-ship missile China has produced thus far,’” according the Missile Defense Advocacy group.

“The danger posed by the YJ-12 comes from its range of 400 km, making it the longest-ranged ACBM ever engineered, and its ability to travel at high rates of speed (up to Mach 3). This makes it difficult for Aegis Combat Systems and SM-2 surface-to-air missiles that protect U.S. carrier strike groups to identify and engage the missile since it can be launched beyond their engagement ranges, which greatly reduces the U.S. Navy’s time to react,” the group notes.

“Protection against the YJ-12 is even more difficult due to its cork-screw-like turns, which allow it to evade final defenses. With the combination of Chinese Flankers, YJ-12’s can potentially reach up to 1,900km, which could cause an even larger problem for the U.S. than China’s DF-21D ASBM. Deployment of the YJ-12 and the development of related ASCMs also demonstrates China’s desire to field anti-access and area denial capabilities in case of future conflict.”

Related: China Just Blew The U.S. Navy’s Electromagnetic Railgun Out Of The Water »

Ultimately, the H-6K is just a launch platform; it does not have to be a spectacular performer like the Russian Tupolev Tu-22M3 Backfire or Tu-160M2 Blackjack to be dangerous. Indeed, it is the H-6K’s extremely potent long-range missile armament is the real threat rather than the aircraft itself. The Soviet Union developed the tactics to use those missiles during the Cold War and PLAAF can pick up many valuable insights training with the modern Russian Air Force, which while smaller, retains much of the institutional knowledge of its Cold War-era predecessor.

The H-6K is just one component of a family of Chinese anti-access systems including anti-ship ballistic missiles that China is developing to keep U.S. forces at bay. The bomber will be used with other Chinese A2/AD forces, and it that role, it pose a serious danger to American interests in the Pacific.