China commissions its largest and ‘most powerful’ surface warship yet

Observers say the commissioning of China's first 10,000-ton-class Type 055 destroyer, which is expected to accompany aircraft carriers in battle groups, is a step forward as Beijing seeks to operate farther from its shores and punch farther into the western Pacific 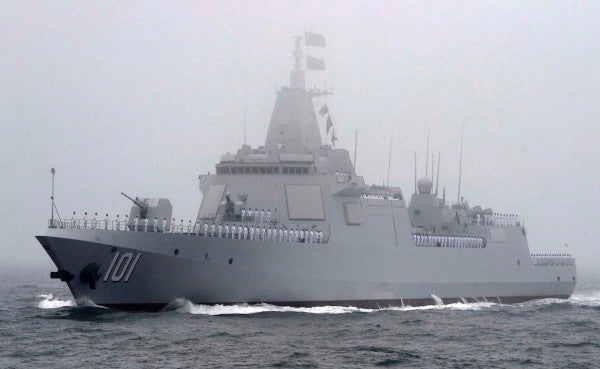 China's navy commissioned its biggest and most advanced surface warship yet, the Nanchang guided-missile destroyer, on Sunday morning in the port city of Qingdao, state media reported.

Observers say the commissioning of China's first 10,000-ton-class Type 055 destroyer, which is expected to accompany aircraft carriers in battle groups, is a step forward as Beijing seeks to operate farther from its shores and punch farther into the western Pacific.

Launched in June 2017, its commissioning marks the navy's leap from the third generation to the fourth generation of destroyers, the navy said in a statement.

Collin Koh, a research fellow and maritime security expert at the S. Rajaratnam School of International Studies in Singapore, told The Japan Times that the warship is “by far the most powerful surface combatant” in China's navy, outside of its aircraft carriers.

Having a displacement of more than 10,000 tons, the 180-meter-long, 20-meter-wide Type 055 has been referred to by the Pentagon not as a destroyer, but as a larger cruiser design. With more Type 055s planned, China is the only known country to be building such a warship.

It is the first to enter into service in 2020, according to state-run China Central Television.

At a commissioning ceremony for the domestically developed warship, the captain of the Nanchang, Zhou Minghui, told CCTV that the vessel would now begin conducting training “in all systems and subjects in order to form combat capability and integrate into the PLA's combat system.”

The commissioning showed that the navy “has now stepped into the era of fourth-generation destroyers,” CCTV said.

The Global Times, quoting a Chinese naval expert, said the Nanchang is expected to accompany the Liaoning, China's first aircraft carrier, which is a refit of a Soviet-era vessel and is also based in Qingdao. He said it would likely form an aircraft carrier battle group.

The Type 055 will serve as a “powerful escort” to aircraft carriers, it quoted Beijing-based naval expert Li Jie as saying. Li called the vessel “very versatile” and noted that it could also lead a task group without a carrier, conducting “a wide range of missions.”

Another military expert, Song Zhongping, told the Global Times that the Nanchang could also accompany the Shandong, China's first domestically produced aircraft carrier, since it is unlikely to be a fixed partner to either of China's two aircraft carriers.

Koh echoed this sentiment, saying that the home-porting of the Nanchang in Qingdao might not necessarily mean it will be deployed to a sole specific location, since China's fleets do send their assets across regions.

“So the Nanchang could possibly be deployed in the East China Sea, though I don't think it'll be sent into the territorial seas off the Senkaku Islands, and at best outside the 12-nautical-mile (22-km) limit,” he said.

China regularly sends government vessels to the area surrounding the Japanese-controlled Senkaku Islands, which are also claimed by China, where they are known as the Diaoyu Islands.

Koh said that “the ship certainly will attract Japan's attention,” given its size, capabilities and the navy's propensity to travel through key waterways such as the Miyako Strait in Okinawa when returning from the western Pacific.

“However, I see it as over time, the ship will be monitored and considered in no different manner from how the other PLAN ships are being put under tabs by Japanese forces,” he said.

The ship could also prove worrying for Taiwan, which saw the re-election of President Tsai Ing-wen, a skeptic of Beijing and leader of the independence-minded Democratic Progressive Party, a day ahead of the commissioning.

“The first Type 055 Nanchang destroyers … could be useful to blockade Taiwan,” Oriana Skylar Mastro, a China expert with the American Enterprise Institute think tank in Washington, said before the U.S. Congress' United States-China Economic and Security Review Commission in September.

The Nanchang was launched in June 2017 and joined a naval parade last April marking the 70th founding anniversary of the People's Liberation Army Navy (PLAN).

Its commissioning is seen as a reflection of a major shift in China's deep blue-water strategy that it says is aimed at safeguarding China's sovereignty security and overseas interests. Chinese military experts say this strategy requires large warships such as Type 055 destroyers, aircraft carriers and amphibious assault ships.

Sunday's commissioning is the latest development in President Xi Jinping's push to turn the country's military into a top-notch force.

Under Xi, China's military has undergone a massive modernization push to turn it into one that can protect Beijing's interests as disputes roil relations with the U.S., its neighbors and old foe Japan.

In 2017, Xi pledged to complete the modernization of China's armed forces by 2035 and to build a “world-class” military capable of winning wars across all theaters by 2050.

The focus on creating a more potent fighting force has seen Beijing pour cash into projects such as a second aircraft carrier, integrating stealth fighters into its air force and fielding an array of advanced missiles that can strike air and sea targets from long distances.

“China's technological advancement in naval design has begun to approach a level commensurate with, and in some cases exceeding, that of other modern navies,” the U.S. Defense Intelligence Agency said in last year's annual report on Chinese military power.

“Once operational, the new Renhai class (Type 055) guided-missile cruiser, of which several are currently under construction, will be one of the most advanced and powerful ships in the world, boasting a large array of advanced-capability weapons and sensors developed domestically.”

Five other Type 055 destroyers have reportedly been launched at the Dalian Shipyard, Northeast China's Liaoning Province and Jiangnan Shipyard in Shanghai. Analysts predict China could develop an upgraded version of the Type 055 that features cutting-edge weapons technology such as an electromagnetic rail gun.