A really big deal: China is a drone superpower

Begun, the drone wars have. 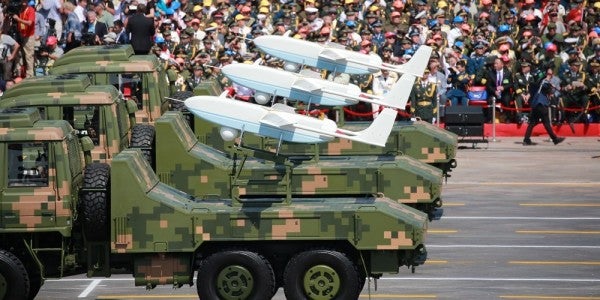 For years, drone warfare has been an essentially American pursuit. The new age of armed robots has been symbolized by Predators and Reapers spewing Hellfire missiles.

But guess who's the biggest exporter of combat drones? China.

“In 2014–18 China became the largest exporter in the niche market of unmanned combat aerial vehicles (UCAVs), with states in the Middle East among the main recipients,” according to the Stockholm International Peace Research Institute, which compiles estimates of global military strength and arms spending.

Indeed, combat drones are spreading across the globe. “The number of countries that import and use unmanned combat aerial vehicles (UCAVs)—which are remotely controlled armed aircraft often referred to as armed drones—continued to increase in 2014-18,” SIPRI said.

“There is widespread discussion about the impact of UCAV proliferation on peace and security. China has become the primary exporter of UCAVs. Whereas China exported 10 UCAVs to 2 countries in 2009-13, in 2014-18 it exported 153 to 13 countries—5 of which are in the Middle East: Egypt, Iraq, Jordan, Saudi Arabia and the United Arab Emirates (UAE). In contrast, the United States delivered three UCAVs in 2009-13 and five in 2014-18. In both periods all the deliveries were to the United Kingdom. Iran delivered 10 UCAVs to Syria in 2014-18, while the UAE delivered 2 to Algeria.”

This explains why the U.S. Army, which has been lackadaisical about air defense for years, is now suddenly interested. Nations such as Iran are far inferior to the United States in conventional combat weapons such as tanks and jet fighters, but it doesn't take much money or advanced technology to strap a bomb onto a small drone that's hard to detect or shoot down.

China's arms exports are slowing after a massive surge over the last few years. After nearly tripling between 2004 and 2013, they increased by only 2.7 percent over the 2014 to 2018. Interestingly, China's more aggressive foreign policy in Asia has hampered its arms exports. “China's arms exports are limited by the fact that many countries—including 4 of the top 10 arms importers in 2014-18 (India, Australia, South Korea and Vietnam)—will not procure Chinese arms for political reasons,” SIPRI noted.

During the Cold War and after, China was notorious as an exporter of cheap knockoffs of old Soviet hardware such as tanks and jet fighters. Yet China's push to develop Western-style smart weapons, from aircraft carriers to stealth fighters, appears to be paying economic dividends. “Improvements in Chinese military technology have opened up opportunities for arms export growth, including exports to new custom­ers,” said SIPRI.

However, China's arms exports haven't totally dampened Beijing's appetite for imported—mostly Russian—arms. China was the world's sixth-largest importer of weapons between 2014 and 2018, down 7 percent from the 2009 to 2013 time period. “Russia accounted for 70 per cent of Chinese arms imports in 2014-18,” SIPRI estimated. “China remains reliant on imports for certain arms technologies such as engines for combat aircraft and large ships as well as long-range air and missile defense systems. Its own arms industry has yet to develop the technological capability to match Rus­sian suppliers in these fields.”

SEE ALSO: Dunford: Google's work in China is providing a 'direct benefit' to the Chinese military

WATCH NEXT: China's 'Mother Of All Bombs' Just Made An Explosive Debut