China has launched a spate of ballistic missiles, including an apparent “carrier killer” weapon, into the disputed South China Sea as part of integrated military exercises apparently simulating a strike on U.S. warships in a warning to the United States 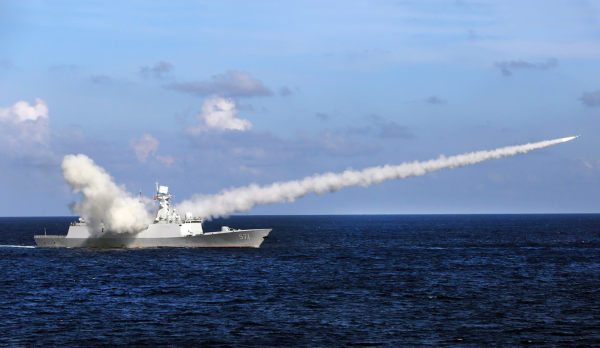 China has launched a spate of ballistic missiles, including an apparent “carrier killer” weapon, into the disputed South China Sea as part of integrated military exercises apparently simulating a strike on U.S. warships in a warning to the United States.

The launches on Wednesday came as Washington blacklisted 24 Chinese companies and targeted individuals it said were part of construction and military activities in the South China Sea — the first such sanctions against Beijing over the strategic waterway and a dramatic escalation of the U.S. offensive against China’s actions there.

They also came as the U.S. neared the end of its annual RIMPAC military drills in Hawaii, the world’s largest maritime exercise with 10 navies represented from regional allies and partners, including Japan.

Japan’s top government spokesman said on Thursday that Tokyo has been watching Beijing’s recent moves in the South China Sea “with concern.”

“Our country is strongly opposed to whatever act that heightens tensions in the South China Sea,” Chief Cabinet Secretary Yoshihide Suga told a news conference, when asked about the missile tests. “Issues surrounding the South China Sea are directly linked to the peace and stability of the region, a matter of legitimate interest of the international community, including our country.”

Experts said Beijing had likely timed the launches as a response to increasing U.S. pressure on China — and to highlight its growing anti-access and area-denial capabilities to prevent the U.S. and others militaries from intervening in its immediate areas of concern.

“It’s hard not to see the timing of the tests, coinciding with RIMPAC, as the People’s Liberation Army thumbing its nose at the Americans,” said Euan Graham, a senior fellow at the International Institute for Strategic Studies think tank in Singapore.

The U.S. decision to slap the 24 Chinese companies with trade and visa restrictions came over their efforts to help Beijing “reclaim and militarize disputed outposts” in the South China Sea, the U.S. Commerce Department said in a statement.

The department noted this included units of the state-owned China Communications Construction Co., which plays a large role in projects under Chinese leader Xi Jinping’s Belt and Road initiative.

“The PRC must not be allowed to use CCCC and other state-owned enterprises as weapons to impose an expansionist agenda,” U.S. Secretary of State Mike Pompeo said, using the acronym for China’s formal name. “The United States will act until we see Beijing discontinue its coercive behavior in the South China Sea, and we will continue to stand with allies and partners in resisting this destabilizing activity.”

Separately in Hawaii on Wednesday, U.S. Defense Secretary Mark Esper took aim at China for failing to live up to its promise to respect the global rules-based order.

“To advance the CCP’s agenda, the People’s Liberation Army continues to pursue an aggressive modernization plan to achieve a world class military by the middle of the century,” Esper was quoted as saying, referring to the ruling Chinese Communist Party.

“This will undoubtedly involve the PLA’s provocative behavior in the South and East China Seas, and anywhere else the Chinese government has deemed critical to its interests,” he added.

As for the launches, it was unclear precisely what types of weapons the Chinese military had fired, but a U.S. defense official told The Japan Times on condition of anonymity that four medium-range ballistic missiles launched from mainland China had hit the South China Sea in an area between Hainan Island and the Paracel Islands that Chinese maritime authorities said Friday would be off-limits from Monday to Saturday due to military exercises.

The official said the U.S. military was still conducting an assessment on the type of missiles launched.

The Hong Kong-based South China Morning Post newspaper, meanwhile, quoted a source close to the Chinese military as saying that Beijing had launched two missiles, including a carrier-killer anti-ship weapon in a warning to the United States.

Related: Navy says it's 'not intimidated' by China's missiles as Beijing bristles over US aircraft carriers in South China Sea

The Chinese state-run Global Times newspaper alluded to the missiles in a report late Wednesday. It said that a DF-26B, which has a range of 4,000 km (2,485 miles) and can be used in nuclear or conventional strikes against ground and naval targets, and a DF-21D, which can travel about 1,800 km and has been described as the “world’s first anti-ship ballistic missile,” may have been launched from the mainland.

The Global Times, quoting an unidentified Chinese military expert, said the missiles are “extremely threatening to U.S. warships, particularly to its aircraft carriers.”

The weapons are also worrisome for Tokyo, since “a growing number” of the Chinese missiles put U.S. bases in Japan in range, the Pentagon has said. Indeed, the U.S. military has said approximately 95 percent of the missiles in the Chinese arsenal fall in the 500 to 5,500-km range — meaning key U.S. facilities throughout Japan could already be within range of thousands of difficult-to-defeat advanced ballistic and cruise missiles.

Observers say China’s anti-ship ballistic missiles are among the world’s most advanced, but test-firings of the missiles, including in the South China Sea, are not exactly new. U.S. defense officials said China conducted ASBM tests in the waterway last summer, and Beijing is believed to have fired well over a hundred ballistic missiles last year for development and operational training purposes.

“That they have been working on ASBMs and testing them isn’t a surprise,” said Vipin Narang, a professor of international relations at MIT. “But everything is now framed as a provocation.”

Aircraft-tracking software also showed that the U.S. Air Force had sent one of its three RC-135S “Cobra Ball” ballistic missile-detection planes from Kadena Air Base in Okinawa into the area ahead of the launches, a signal that the U.S. was likely attempting to observe the missiles.

The launches came a day after China claimed a U.S. U-2 spy plane had entered a “no-fly zone” without permission during a Chinese live-fire naval drill in the Bohai Sea off its northern coast.

China’s Defense Ministry protested the move, warning that it had threatened “to cause a misjudgment and even an accident, and was a blatant provocation,” while state-run media said the U.S. aircraft had faced the risk of being mistakenly shot down and the PLA had “exercised great restraint not to do so.”

With a little over two months before the Nov. 3 U.S. presidential election, both candidates have ramped-up their rhetoric toward China. The Trump administration has also unleashed a spate of measures targeting Beijiing over COVID-19 — what Trump derisively refers to as the “China virus” or “Wuhan virus” — as well as trade, technology, supply chains and maritime assertiveness.

China has delivered a measured response, for the most part, experts say.

“China’s broader posture is still one of tactical restraint towards the U.S., as Beijing wants a truce during the election campaign,” Graham said.

Still, some have been concerned about the possibility of an accidental clash, especially in the South China Sea.

“China could see military action as its only recourse if it loses the diplomatic option to assert its sovereignty claims,” a recent report by the New York-based Council on Foreign Relations noted. “The continued downward spiral in U.S.-China relations could also encourage Xi to adopt a now-or-never approach to the South China Sea.”

But Graham said there was “little possibility” of a clash there due to the election and “also because the U.S. military has got its act together despite the pandemic” after grappling with coronavirus outbreaks in its ranks earlier this year.

Washington has targeted Beijing over its assertiveness in the waterway, including the construction of man-made islands, some of which are home to military-grade airfields and advanced weaponry. The U.S. and Japan fear the outposts could be used to restrict free movement in the area, which includes vital sea lanes through which about $3 trillion in global trade passes each year.

The U.S. military has angered Beijing by regularly holding drills and conducting “freedom of navigation operations” close to and over some of the islands China occupies there, including its man-made islets. Self-Defense Force vessels and aircraft have occasionally joined in the joint exercises there.