The recent showdown could contribute to 'a tectonic shift in India's security calculus.'" 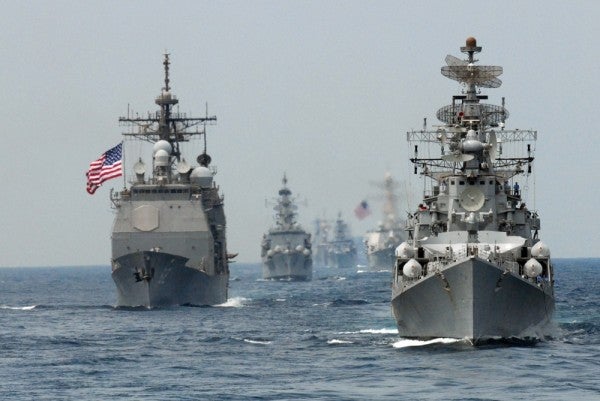 Clashes in June between India and China high in the western Himalayas saw the first deadly encounter between their forces there in four decades. Both sides appear to be disengaging, and India's northern border, parts of which are in dispute with Pakistan and China, will remain a point of focus for its military.

But India's southern maritime approaches, where increasing Chinese naval activity was already a concern, may gain even more attention from New Delhi in the wake of those clashes.

“On the military side, I think we have to stay on guard. The situation is very fragile, even tenuous,” former Indian Foreign Secretary Nirupama Rao, also former Indian ambassador to China and the US, said at an Asia Society Policy Institute event this week.

“Diplomatically, [India has to] keep our channels open with China, but at the same time, obviously, seek possibilities of closer convergence with friends and partners in the Indo-Pacific.”

China is “clearly seeking to improve strategic advantage for itself through naval outreach and construction of ports and facilities,” in that region, Rao added. “We know that, and all these [facilities] have clear military potential. So we need to leverage our assets, in the Indian Ocean region particularly, better.”

Like other countries, India has watched Chinese activity in the Indian Ocean warily, especially since a 2014 visit by Chinese submarines to Sri Lanka, where Beijing's growing influence has concerned India and others.

India's navy said in 2015 that it overlooks “strategic sea lanes” that link the country's “security and prosperity inextricably to the seas.” The recent reorientation has been called “a tectonic shift in India's security calculus.”

India has long sought to retain independence in international affairs, but increasingly contentious relations with China have affected that thinking.

A 73-day standoff between China and India in Doklam, a disputed area in the eastern Himalayas, in summer 2017 “clarified for India that signing, for example, some information-sharing agreements with the US could actually benefit India,” Tanvi Madan, an expert on India at the Brookings Institution, said on a recent episode of the New Statesman's World Review podcast.

“India during Doklam saw the benefits of some of the capabilities that it had acquired from the US — the P-8I maritime surveillance aircraft, which flew right up to the India-China boundary for reconnaissance during that [standoff],” Madan said. “So you see then a decision, for example, to buy more of those.”

Since Doklam, those P-8I aircraft have been more active in the Indian Ocean, where the Indian navy is working to increase its capabilities and to keep an eye on Chinese warships.

Indian officials have previously announced intentions to dramatically expand its navy, and this month, New Delhi said it would buy $5.5 billion in weaponry. Much of it is for the army and air force, reflecting continued emphasis on the land border, but navy projects include spare parts for Kilo-class submarines and other Russian-built warships.

In the wake of Doklam, India also signed a 20-year pact with the Seychelles to build naval infrastructure there. In late 2018, India and the US signed a communications agreement allowing closer coordination of military operations such as tracking subs.

India has been in talks with Japan on a military mutual logistics support deal, which New Delhi already agreed to with Australia and with the US.

“India's maritime enthusiasm and the Indo-Pacific approach is fairly recent. Many of these partnerships and engagements are foundational, but due to the absence of an active maritime-focused policies in the last decades, these agreements/partnerships are important,” Darshana​ Baruah, an expert on the Indian Ocean at the Carnegie Endowment for International Peace, said in an email.

The weeks since the clashes in Ladakh have seen more calls for India to put that navy to use.

At the end of June, Sujan Chinoy, a former Indian diplomat, recommended “opening up” the Andaman and Nicobar Islands in the Bay of Bengal to “friendly navies,” incluing the US, Japan, and Australia, “to promote greater naval cooperation.”

India's chief of naval staff, Adm. Karambir Singh, has said the navy told the government it could act in the Malacca Straits, which connect the Indian and Pacific oceans, in response to tension on the northern border. And this month, a former chief of naval staff, retired Adm. Arun Prakash, suggested using that “maritime leverage” to add “weight to India's negotiating position.”

India has also engaged more with partners, which it has been historically cautious about doing. In June, India said it was open to Australia joining this year's Malabar naval exercises as an observer, something New Delhi has hesitated to do for years.

Recent tensions “will likely underscore to strategists in New Delhi and Beijing that they should be prepared for sustained competition across domains, and that India cannot take for granted its partnerships in the region,” Joshua White, a professor of South Asia Studies at Johns Hopkins University, said in an email.

“The decision to use India's advantage at sea is completely political and will depend on Delhi's political appetite,” Baruah said. “There most certainly is an advantage and a role to be played, which can be maximized in collaboration with India's Indo-Pacific partners.”

Logistics exchanges and the use of Indian Ocean islands are just a few potential areas of collaboration, and India is likely to pursue a combination of them, Baruah said. Partnering with the US and others in the region offers “options to maximise some of [India's] advantage in the maritime domain.”

India has long valued strategic autonomy, and while it's likely to seek to retain some of that freedom, there's reason to think it will work more closely with an international coalition to counter an increasingly aggressive China, according to Shashi Tharoor, a former Indian minister of state for external affairs.

Baruah expected an increase in maritime cooperation either way.

“What I hope is that [the] Ladakh issue has highlighted the maritime option available to India,” Baruah said. “I hope this provides a chance to raise the urgency to clear some of the bureaucratic challenges in recognizing the role of the navy and maritime partnerships in India's strategic and security interests.”