Are China And India On The Brink Of War In The Himalayas?

In a tense standoff between nuclear-armed nations that threatens to destabilize Asia, both sides are digging in, with one warning... 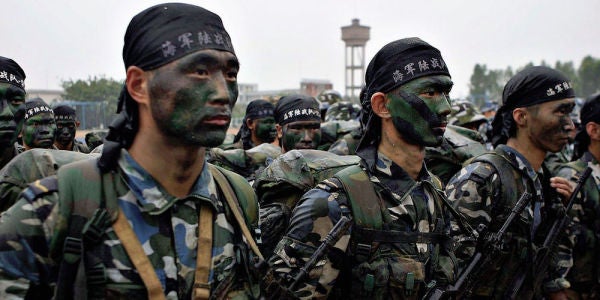 In a tense standoff between nuclear-armed nations that threatens to destabilize Asia, both sides are digging in, with one warning of unspecified “countermeasures” and the other saying it won’t be bullied.

In this case, it’s not the United States and North Korea — whose leaders exchanged bombastic warnings last week — but India and China, which are locked in an impasse over a remote Himalayan plateau.

An editorial last week in China’s state-run Global Times tabloid warned that Beijing would use “all possible means” to get India to withdraw scores of troops from Dolam, a 34-square-mile bowl along the border that the two Asian giants share with the tiny mountain kingdom of Bhutan.

India has refused, arguing that the land claimed by China actually belongs to Bhutan, with which India shares a close relationship.

The face-off between Indian soldiers and Chinese border guards — positioned just a few hundred feet apart atop the 10,000-foot plateau — marks one of the most serious military confrontations since 1962, when the two countries fought a one-month war won by China that left more than 2,000 troops dead, most of them Indian.

That conflict also began with a border dispute in the Himalayas — and there is more at stake this time around.

China and India not only are the two most populous countries in the world, each with more than 1.3 billion people. They also are increasingly confident players in a battle for supremacy in southern Asia.

Under President Xi Jinping, Beijing has constructed islands to extend its influence over the South China Sea, initiated the mammoth Belt and Road infrastructure-building project westward through Pakistan and cultivated closer ties with countries — including Bangladesh, Sri Lanka, Nepal and Bhutan — that long have been in India’s orbit.

But Indian Prime Minister Narendra Modi has displayed more willingness to confront China than his predecessors.

At his 2014 swearing-in, Modi irked Beijing by inviting the leader of the India-based government-in-exile of Tibet, which China views as part of its territory. New Delhi has opposed Xi’s signature Belt and Road Initiative, arguing that it encroaches on Indian lands and expressing skepticism over Chinese intentions.

India also has quietly built up its military capabilities by posting additional infantry troops, army reservists and tanks in the plains of Ladakh, site of two previous border standoffs with China in 2013 and 2014.

China is unquestionably stronger militarily, owning the world’s largest standing army of more than 2 million troops, twice as many as India. Beijing also possesses five times as many tanks and submarines and double the number of warships and military aircraft.

The current crisis began in early June, when Chinese construction teams — escorted by People’s Liberation Army border guards — arrived with bulldozers to extend a road running south through a Tibetan valley into Dolam.

The plateau is one of several disputed points along the Chinese-Bhutan border. The two sides have conducted 24 rounds of negotiations over the border, but Dolam’s status remains unresolved.

India has no claim on Dolam, but it backs Bhutan’s interpretation of an 1890 border agreement that the land belongs to Bhutan. On June 16, Indian troops stationed nearby came into Dolam and physically blocked the Chinese teams from working.

Two months later, India and China remain at an impasse, with hundreds of soldiers positioned in the disputed area while their governments trade barbs in the media.

India “lacks strength compared with China,” the state-run Global Times tabloid said in an editorial last week, adding that the outcome of the standoff “is fixed.”

“If the Narendra Modi government continues ignoring the warning coming from a situation spiraling out of control, countermeasures from China will be unavoidable,” it said.

China’s Foreign Ministry this month issued a document that traced the country’s claim over the disputed area to a 1980 convention with Britain and accused India of violating international law by invading Chinese territory.

The standoff has triggered an outpouring of nationalism and patriotism on Chinese social media. Many web users accused India of bluster and questioned why Chinese authorities hadn’t responded more forcefully.

One commenter on Weibo, the Chinese version of Twitter, wrote: “Our central government and military commanders, why don’t you put down India right now?”

The reaction in India has been more muted, perhaps owing to its status as the feebler power. Commentators have focused on India’s commitment to Bhutan and what New Delhi views as Chinese belligerence.

Kanwal Sibal, a former Indian foreign secretary, wrote on the Daily O website that China “is baring the ugly face of its diplomacy more and more, using unbecoming language, adopting condescending postures, crowing about the disparity in power between it and others and unashamedly acting as a bully where it thinks it can.”

Defense Minister Arun Jaitley on Wednesday made a veiled reference to the face-off when he told lawmakers that “some people are targeting our country’s sovereignty and integrity, but I am fully confident that our brave soldiers have the capability to keep our country secure.”

Bhutan has maintained a studied silence except for one statement issued by its Foreign Ministry in late June, saying China was in “direct violation” of its agreements with the kingdom and calling for a return to the pre-June 16 status quo.

Neither India nor China has anything to gain from a military confrontation. But with Modi readying for a likely re-election bid in 2019 and Xi preparing for the once-every-five-years Communist Party congress this fall, experts say both leaders are unwilling to be seen as backing down.

While neither country has commented publicly on the troop presence, Ajai Shukla, a retired Indian army colonel and commentator on security affairs, has quoted sources as saying that about 40 Chinese border guards are positioned across from roughly three times as many Indian soldiers, with both sides having stationed hundreds of reinforcements around the bowl.

Shukla wrote in the Business Standard newspaper this month that both countries “have reached an understanding to mutually withdraw troops from the contested area, regardless of their public postures.” But until now, there has been no overt sign of a de-escalation.