China is developing a new carrier-based fighter aircraft to succeed the Shenyang J-15 Flying Shark. The J-15—which is an unlicensed Chinese... 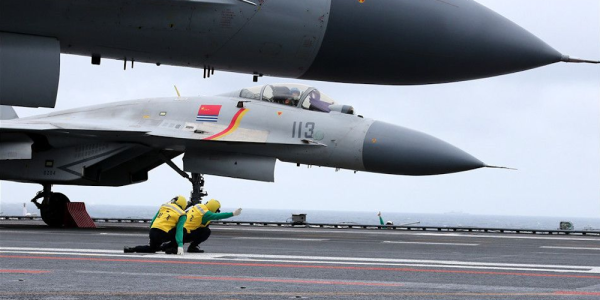 The J-15—which is an unlicensed Chinese development based on a T-10K-3 prototype of the Russian Su-33 Flanker-D—has proven to be a disappointment in service with the People’s Liberation Army Navy (PLAN). The navalized Chinese Flanker derivative has suffered a number of high-profile crashes due to technical issues with the aircraft’s engines and flight control system.

The J-15’s problems are apparently serious enough that Beijing is embarking on the development of a new carrier-based aircraft that would take the J-15’s place in China’s nascent carrier air wings.

It is unclear what the J-15’s successor will look like, but whatever aircraft Beijing develops will have to be able to operate from the ski-jump configured flight decks of theType 001 and Type 001A carriers —which are developments of the Soviet Kuznetsov-class —as well as the forthcoming Type 002, which is reportedly going to be outfitted with electromagnetic aircraft launch system (EMALS).

Chinese naval analysts have suggested that Beijing might develop a naval variant of the FC-31 Gyrfalcon, which is a “privately-funded” development of the state-owned Shenyang Aircraft Corporation.

The impetus for doing away with the J-15 stems from a series of four serious accidents suffered by the type.

According to the SCMP, there have been at least four J-15 crashes that have resulted in at least one fatality and one case of serious injury due to what has been described as a series of “unpardonable mechanical failures.”

The technical problems seem to be traceable to the J-15’s indigenously developed engines and flight control system.

“The J-15 is a problematic aircraft – its unstable flight control system was the key factor behind the two fatal accidents two years ago,” a source told the SCMP.

Indeed, during two of the incidents which resulted in J-15 crashes, the SCMP said the “flight control system was breaking down” on approach to the runway during Field Carrier Landing Practices (FCLP). That might suggest the J-15’s flight control laws are vulnerable to pilot induced oscillations or any number of other problems.

Additionally, it is not clear how reliable the J-15’s indigenous Shenyang Liming WS-10H engines are and if they played a factor in these crashes. Older versions of the J-15 were powered by the Russian Salyut AL-31F engines, which are more or less reliable.

The Chinese apparently were well aware of problems with the J-15 but pressed ahead with deploying the jet operationally regardless of the risk, which highlights a culture that is markedly different from the U.S. Navy.

Indeed, while the U.S. Navy will fly an aircraft with restrictions for problems that have emerged once a type has entered service, the Pentagon would not normally declare an aircraft operational if it is known to have serious safety issues.

“Of course it’s impossible to prevent any accident from ever happening during training,” a PLAN veteran told the SCMP.

“But unlike their counterparts in Western countries, Chinese air force pilots are asked to work around these mechanical errors.”

The PLAN also seems to have been in a state of denial about the extent of the J-15’s problems even after at least one naval aviator was killed in a crash (though that is often a problem with military services around the world).

“Aviation experts at first refused to acknowledge that the J-15 has design problems,” a source told the SCMP.

“They only agreed there were problems after Cao [Xianjian, a highly experienced naval aviator] encountered the same trouble.”

That the J-15 has serious design flaws should come as no surprise.

At the end of the day, the Chinese reverse engineered the J-15 design from an incomplete prototype of the Sukhoi Su-33 that it acquired from Ukraine. While Chinese engineers might have gained considerable insight into the Flanker design from the T-10K-3 and other Su-27 derivatives in Beijing’s possession, because they did not develop the jet or its systems, they do not fully understand the airframe due to some of the traditional limitations inherent to reverse engineering. These gaps in knowledge probably led to the some of the problems the Chinese are now encountering with the J-15 design.