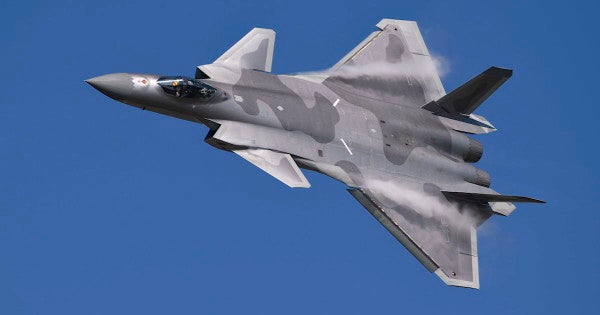 NEW YORK — China may declare its first stealth fighter operational this year as it also develops long-range bombers capable of carrying nuclear weapons, part of a regional buildup by Beijing that the U.S. is closely monitoring, according to the U.S. Air Force's Pacific commander.

Gen. Charles Brown, the head of Pacific Air Forces, said the stealthy J-20 fighter could “possibly” be operational this year, a move he said would signal “greater threat, greater capability” for China in the Pacific. He went on to emphasize that U.S. efforts to counter those developments include rising deployments of next-generation F-35 jets and continuing overflights of strategic areas such as the South China Sea.

“My sense of the way the Chinese operate is somewhat incremental,” Brown said in an interview this week at Bloomberg's headquarters in New York. “They'll continue to push the envelope to figure out does anybody say or do anything — if you don't push back it'll keep coming.”

China's J-20 fighter is part of a modernization effort that's been “closing the gap with Western air forces across a broad spectrum of capabilities, such as aircraft performance, command and control and electronic warfare.” according to the report.

Brown also said he thinks China is moving to develop dual-use bombers that would be “similar to our bombers” in terms of being able to carry nuclear weapons and nonnuclear precision-guided weapons. “I don't think it would be too far off the mark to say they could do that as well,” Brown added, without indicating whether China may have a stealth bomber capability.

Acting Defense Secretary Patrick Shanahan, in a statement Wednesday for the House Defense Appropriations subcommittee, said a Chinese long-range bomber “if successful, would make it only one of three nations” to “possess a nuclear triad” of land, sea and air-based nuclear capabilities.

The U.S. has a number of ways to counter China's buildup, Brown said. That includes being unpredictable in deployments of the B-1B, B-52 and B-2 bombers. The B-1B, Brown said, is now qualified to carry a new Lockheed Martin Corp. anti-ship missile, a few of which have been stockpiled in the Pacific region.

Brown, a four-star general who has logged more than 130 combat flight hours out of 2,900 overall, was on the U.S. East Coast this week to speak with Asia experts about the challenges facing his command. He started in the job more than eight months ago after serving as deputy commander of U.S. operations in the Middle East and head of the air war against Islamic State in 2015-2016.

A key issue for Brown in his latest post is “how do I gain a greater understanding of how China operates — not only their equipment capability — but how they operate, how they command and control. I want to understand what makes their blood pressure go up” so as to avoid miscalculations.

“Their propensity to fly out over the water has increased over the years,” he said.

It's not just the U.S. noticing the increased Chinese capability, Brown said. He touched briefly on the State Department and Pentagon's review of a potential sale of new F-16s to Taiwan. President Donald Trump's advisers encouraged Taiwan to submit a formal request for the jets. That request would need to be converted into a formal proposal by the Defense and State departments, and then Congress would have 30 days to decide whether to block the sale.

“There's been a little increase in tension there recently, which may be the impetus” behind Taiwan's request, Brown said. The Beijing government considers Taiwan's fate a “core interest” — more important than almost any other issue, and has increased pressure on countries and multinational companies to avoid actions that could imply sovereign status for the island.

The U.S., wary of antagonizing China, hasn't sold advanced fighter jets to Taiwan since President George H.W. Bush announced the sale of 150 F-16s in 1992. The Obama administration rejected a similar Taiwanese request for new jets, agreeing in 2011 to upgrade the island's existing fleet.

Brown has more than a passing familiarity with the F-16 — he said it's his favorite military aircraft of the numerous ones he has piloted. In addition to the F-16, he has flown the AH-64 Apache attack helicopter, V-2 tilt-rotor Osprey, AC-130U gunship, B-1B, B-2A and B-52H bombers, C-130J transport and KC-135 tanker, among others.

SEE ALSO: The US Military Put A Fake Chinese J-20 Stealth Fighter At A Georgia Air Base

WATCH NEXT: Is This China's Ne H-20 Stealth Bomber?