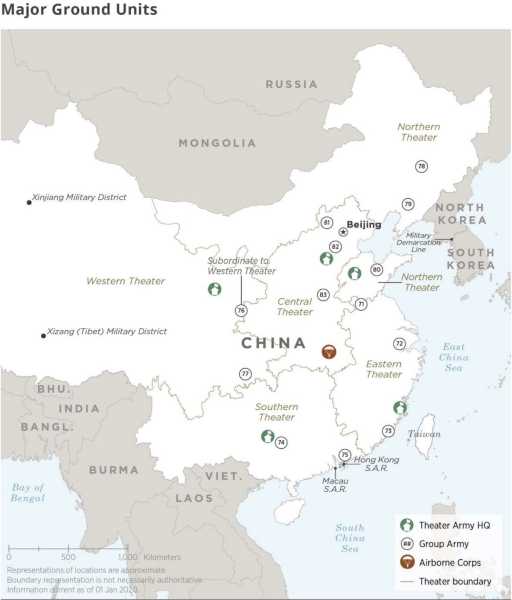 The report contains facts that will unnerve U.S. policymakers and defense officials: China now has the world's largest navy, is expanding its already massive and advanced missile arsenal, and has the capability to seize Taiwan's outlying islands.

China has “marshaled the resources, technology, and political will over the past two decades to strengthen and modernize the PLA in nearly every respect,” the report states, adding that “China is already ahead of the United States in certain areas.”

This point is made clear in six maps showing the positioning of PLA forces and ranges of its missiles.

The first map shows the locations of the headquarters of the PLA Ground Forces (identified in the report as the PLA Army or PLAA), as well as the general positions of their group armies.

A group army is made up of 78 combined-arms brigades, each of which can have as many as 5,000 soldiers.

Interestingly, the map includes the PLA's Airborne Corps, which is actually part of China's air force. The Corps is made up of six airborne combined-arms brigades, at least one of which is mechanized with an air-droppable armored infantry fighting vehicle, the ZBD-03.

The next map focuses on the China's Navy, the PLAN.

It is the largest navy in the world with 350 vessels, and is “largely composed of modern multi-role platforms featuring advanced anti-ship, anti-air, and anti-submarine weapons and sensors.”

The vessels are part of three fleets based in the PLA's Northern, Eastern, and Southern theaters.

The map shows the makeup of all fleets, with the Eastern and Southern Fleets having the most vessels. The PLAN also includes six marine corps brigades and a small but growing air force.

Though the PLAN shows clear signs of global ambitions, its main focus is to dominate the areas along the First Island Chain, stretching from Kyushu to the waters around Vietnam. A major flashpoint along this route is Taiwan, which Beijing sees as a breakaway province.

It is believed that in the event of war with Taiwan, the ships of the Eastern and Southern theaters will be directly involved around the island, while Northern Theater ships will protect sea approaches to China.

According the report, the PLAAF, combined with the PLAN's air wing, is the largest air force in the region and the third largest in the world.

“The PLAAF is rapidly catching up to Western air forces across a broad range of capabilities and competencies,” the report notes.

More than 800 of China's 1,500 fighter jets are considered fourth-generation, on par with fighters in Western inventories. The PLAAF also has a stealth fighter in service and a stealth bomber in development.

The map shows the approximate locations of each of the PLAAF's/PLAN Aviation theater headquarters as well as multiple air bases. Importantly, it also shows which bases house the PLAAF's bomber and transport division HQs.

With development of an air-launched nuclear ballistic missile possibly underway, China could soon have a complete and viable nuclear triad for the first time.

The map also notes special mission aircraft, which handle electronic warfare and aerial refueling. They are important force-multipliers and are essential for a modern and dominant air force.

Most of China's airbases are in the country's south and east. Its airbases in the west are considerably far from India, limiting PLAAF capabilities in the tense region.

Three maps show the devastating potential of what may be the PLA's most important weapons: ballistic and cruise missiles. China has one of the world's largest and most diverse missile arsenals.

The first missile map shows the range of China's conventional missiles, almost all capable of reaching the Second Island Chain over 2,000 km away.

Particularly worrying are the DF-26 and DF-21. Both are mobile ground-launched intermediate-range ballistic missiles that are expected to target US carriers and their escort ships. The DF-26, which can carry conventional and nuclear warheads, is known as the “Guam killer” because of its ability to reach US bases in Guam.

The CSS-4 Mod 2/Mod 3 (also known as the DF-5) and the DF-41 are especially feared. Both can reach almost all of the continental US, and the DF-41, unveiled for the first time last October, can carry up to 10 multiple independently targetable reentry vehicles — 10 warheads, each capable of hitting different targets, that are released when the missile reaches its apex.

China is increasing its investment in missile technology. The report says that, in 2019, the PLA Rocket Force (PLARF) “launched more ballistic missiles for testing and training than the rest of the world combined.”

The final map shows the range of China's anti-air, anti-ship, and short-range ballistic missiles as they relate to Taiwan. Nearly all of the island is covered from the mainland, and PLAN ships are more than capable of filling in any gaps.

There are still important differences in the quality and capabilities of Chinese troops and weapons in comparison to the United States.

The U.S. military has much more combat experience than the PLA (which hasn't fought a major war since 1979) as well as powerful assets like dedicated carrier task groups. The U.S. also has a number of allies in the region that it has worked with extensively.

The PLA also still faces challenges, such as its difficulty producing high-quality engines and in dealing with corruption and infighting within the Chinese Communist Party.

But the maps drive home the point of the report: China's military is a massive and modern force that is only getting stronger.