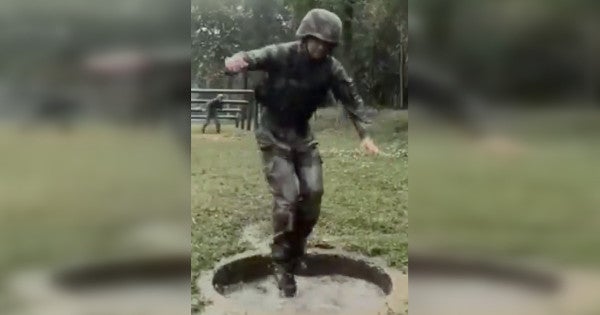 China's state-run news organization is being shamed for flaunting its “incredibly strong soldier morale” in a video showing a People's Liberation Army service member participating in what appeared to be an obstacle course.

“This is the incredibly strong soldier morale of China's PLA,” the People's Daily tweeted in the caption, referring to China's People Liberation Army. “They fear nothing.”

The service member, wearing a combat helmet and a load-bearing vest, could be seen dunking himself into a hole filled with water amid sounds of gunfire.

This is the incredibly strong soldier morale of China’s PLA. ??They fear nothing. pic.twitter.com/AZeMaTzhuC

People on Twitter, some of whom are former U.S. service members, mocked the People's Daily's characterization of the PLA troops:

This is the incredibly strong morale of America’s USMC. ?? They fear nothing. pic.twitter.com/fC7EK16J2U

This is the incredibly strong morale of America’s USMC. ?? They fear nothing. pic.twitter.com/OdR54WPKwc

This is every solider trying to get back to the barracks drunk.

In its latest
report on the Chinese military, the U.S. Defense Department said China continues to reform their armed forces in an effort to become a “world-class” military by 2049.

“In 2018, the PLA focused its training on war preparedness and improving its capability to win wars through realistic combat training during numerous smaller force-on-force exercises and skills-based competition exercises,” the Defense Department said in its annual report to Congress.

In addition to conventional warfare training, the Chinese military is said to have
expanded its presence in the digital realm. Some of its flagship projects, such as the J-20 aircraft, is believed to have mimicked US technology from Lockheed Martin's F-35 Lightning II.

SEE ALSO: This ISIS Fighter Made A Technical Out Of A Shopping Cart