China Just Landed On The Far Side Of The Moon. Could It Become The First Nation To Have Its Own Moon Base?

China's Chang'e-4 lunar lander touched down on the far side of the moon Thursday morning Beijing time, the latest milestone marking the nation's determination to become a global leader in space exploration 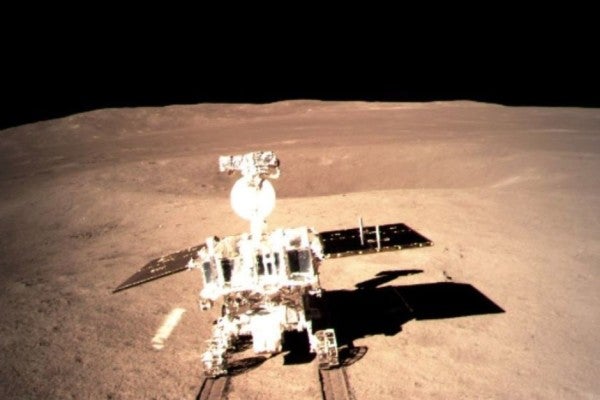 China's Chang'e-4 lunar lander touched down on the far side of the moon Thursday morning Beijing time, the latest milestone marking the nation's determination to become a global leader in space exploration.

Chinese scientists have already declared China's ambitions to establish a manned moon base and to send nuclear-powered rockets into space in future decades to colonize and exploit space.

No nation has ever landed a lunar lander on the far side of the moon, a mission complicated by the fact that the moon blocks direct communications with Earth. China used a relay satellite, Queqiao, to send transmissions to scientists.

Chang'e-4, carrying a 300-pound lunar rover with probes and spectrometers, touched down in the Von Karman Crater in the South Pole-Aitken Basin, according to the China National Space Administration, which published a color photograph of the moon's smooth surface, a crater and the dark horizon beyond.

The moon landed at 10:26 a.m. on the planned landing site, “lifting the mysterious veil” of the far side of the moon, the administration said in a statement, “which opened a new chapter in human lunar exploration.”

The state-owned Global Times said it marked a major step toward the establishment of a Chinese manned lunar base — and toward deep space exploration.

Chang'e-4 was launched from Xichang satellite launch station in Sichuan province, southern China, on Dec. 8. A forerunner, Chang'e-3, landed on the moon in 2013, making China the third country after the Soviet Union and the United States to soft land a spacecraft — meaning the craft would not be destroyed in the landing — on lunar soil. However, its lunar rover malfunctioned soon after landing and was unable to move after its second night, although it continued to send information to Earth.

Later this year, China is expected to launch another lunar lander, Chang'e-5, with its own rover to bring back samples.-

The six-wheeled lunar rover will probe the lunar surface and transmit photographs to earth. The mission also encompasses a biological experiment, to assess whether seeds can germinate and silkworm larvae can hatch and grow in a sealed container containing nutrients, water and air.

“The far side of the moon is a rare quiet place that is free from interference of radio signals from Earth. This probe can fill the gap of low-frequency observation in radio astronomy and will provide important information for studying the origin of stars and nebula evolution,” mission spokesman Yu Guobin told New China News Agency.

Secrecy around China's space program is intense, and news from Chinese authorities about Chang'e-4 was limited in the lead-up to the landing, perhaps because of setbacks in past missions.

Global media attention on China's space program has often focused on those setbacks rather than the steady progress being made. In October China's first private rocket failed to reach orbit, and earlier in the year one of its two orbiting space stations, Tiangong-1, crashed uncontrolled to Earth. The previous year two Long March rocket launches failed. However, China completed dozens of successful rocket launches last year.

“Significantly, China's ambitions for the moon and outer space have only been growing, to include ambitions of a Chinese research base on the moon, as well as developing bio-regenerative life support systems to ensure that humans can settle and survive in lunar conditions.”

She said China's ambition was to be able to “set the rules of the game in outer space” by establishing a long-term human presence.

In May, eight Chinese volunteer students concluded a year-long test of a bio-regenerative life support system at Beihang University, an astronautics and aeronautics university in Beijing. They marked a record for human habitation in an enclosed system with recycled water, food and air — a crucial facility for lunar habitation. The students grew food including wheat, potatoes, carrots, beans and onions, and ate high-protein mealworms.

Underscoring the growing strategic rivalry between the U.S. and China, President Donald Trump has announced plans for a military space force. Meanwhile NASA announced plans in 2017 to return to the moon and to establish a long-term manned base on the moon “for a sustained period of exploration and use,” and as a possible launch pad for a future manned mission to Mars. NASA's eighth spacecraft landing on Mars was in November.

But last month two NASA Apollo mission veterans warned of the need for funding, technology and a cohesive, consistent plan, complaining that successive administrations had failed to fund NASA adequately.

China's rapid expansion of its space program has the Pentagon concerned, although China has insisted it has no plans to militarize space. In August, a Pentagon report on China's military capabilities warned of China's advance in space exploration and its capacity to use space technology for military and surveillance purposes, including the potential to knock out opponents' satellites. China has already tested anti-satellite missiles. The Pentagon predicted China would have a crewed orbiting space station by 2025. China is also swiftly developing its own global satellite navigation system, Beidou.

The lunar lander is just part of an ambitious, carefully planned, long-term space exploration plan that includes colonizing and commercially exploiting the solar system and beyond.

After unmanned rocket launches, China became the third nation to independently send a human into space in 2003 (after Russia and the United States). It has plans to de-orbit its second space station and launch a third, which will be manned. Its manned and robotic missions aim to build its technological prowess and research, and eventually develop the capacity to send astronauts into space for longer periods. From there China plans better space vehicles, deep space exploration and exploitation of resources.