China’s People’s Liberation Army has traditionally relied on foreign and Communist bloc weapons manufactured in China under license—or not. Now,... 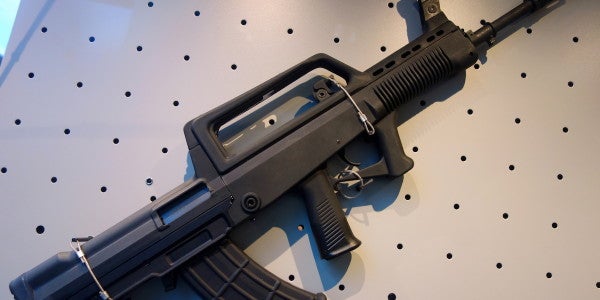 China’s People’s Liberation Army has traditionally relied on foreign and Communist bloc weapons manufactured in China under license—or not. Now, however, as the PLA undergoes an unprecedented modernization, a new generation of locally designed and manufactured light weaponry is arming China’s armed forces, from handguns to light machine guns.

China’s first modern, locally designed and produced assault rifle is the QBZ-95, currently standard issue across the People’s Liberation Army and China’s internal security force, the People’s Armed Police. The weapon first entered Chinese service in the mid-1990s. The QBZ-95​ is a so-called “bullpup” rifle, meaning the trigger and fire-control group are placed ahead of the magazine, which is inserted into the rifle stock.

Typical of bullpup rifles, the QBZ has a twenty-inch barrel but an overall length of just under thirty inches. This gives it a longer barrel, and slightly longer range and velocity against the American M4 carbine, while at the same time having an overall length three inches shorter than the American gun. The downside of the bullpup design is a fixed length of pull that is not adjustable to a user’s unique arm length and the lack of a viable left-handed shooting ability.

The QBZ-95 is fed from a thirty-round magazine and uses a locally designed 5.8-millimeter×42 round. Exactly why China went through the trouble of designing this round is a mystery, as both NATO 5.56 and Russian 5.45 rounds are well established, and it would have been a simple matter to simply copy them and their characteristics. One possible explanation is that, like the Soviet Union, China did not want foreign ammunition to be able to be fired from their weapons.

Internally the QBZ-95 has a short-stroke gas piston, rotating bolt design. In that respect, the insides of the Chinese rifle resembles the Soviet AK-47. In addition to the standard rifle version, there are three variants. A carbine version has a shorter overall length of just twenty-four inches, giving it the compactness of a submachine gun with the stopping power of an assault rifle. A third weapon, the light-support-weapon variant, has an even longer barrel and is equipped with a seventy-five-round drum for delivering suppressive fire.

A new version of the rifle, the QBZ-95-1 features a number of improvements that make for a better, combat-ready rifle for a wider range of users. The improved rifle has a heavier, longer barrel for sustained firing, a muzzle brake to reduce felt recoil and ergonomics that are more friendly to left-handed users. The QBZ-94-1 also reportedly features a bolt-hold-open feature, important for inspecting and cleaning the breech and a gas system regulator. Perhaps most importantly, it is chambered for an improved bullet, the DBP-10, which compares favorably to the U.S. Army’s M855 round, particularly at longer distances.

Unlike the armies of the West, the PLA still sees value in submachine guns. The QCW-05 is a submachine gun very similar in external configuration to the QBZ-95, being a bullpup rifle, the main difference being the former uses a shorter, less powerful 5.8×21 round. A curved, quadruple-stack magazine inserted into the stock magazine well feeds fifty rounds to the submachine gun. The QCW-05 is issued to People’s Liberation Army and People’s Armed Police special operations forces, and is likely issued to military police units and vehicle crews guarding vital equipment, such as PLA Rocket Forces crews.

The PLA’s standard pistol is the QSZ-92 handgun. Outwardly similar to Western pistols, inwardly the design is dated and breaks down into four main parts: a polymer receiver, steel barrel, steel frame and steel rail with attached fire-control group. The double-action firing system cocks the pistol and releases the firing pin with a single pull. As 5.8-millimeter×21 rounds are narrower than Western nine-millimeter Parabellum rounds, the Chinese pistol takes fifteen- or twenty-round magazines, considerably more than a Glock, Sig Sauer, or Smith & Wesson M&P; nine-millimeter pistol.

As it gradually does in all fields of armaments, China is proclaiming its independence from foreign weapon and ammunition designs with a range of modern weaponry. These weapons are a particular point of pride, as this is the first time in the modern era that China is fully supplied with indigenously designed and produced small arms. For the first time in decades, China’s borders are quiet, guarded by Chinese soldiers equipped with Chinese guns. Like the rest of China’s military revolution over the past quarter century, China’s small-arms revolution is a remarkable achievement.