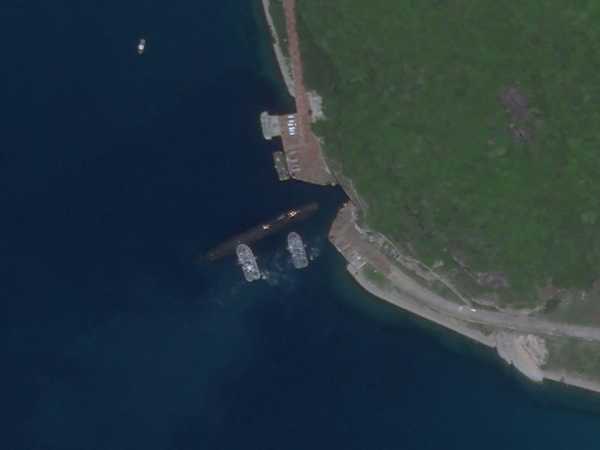 A Planet Labs commercial satellite managed to capture a rare photo this week of a Chinese submarine at what observers believe is the entrance of a secretive undersea cave at a strategically important naval base.

The photo, first posted online by Radio Free Asia, appears to show a Chinese Type 093 Shang-class nuclear-powered fast-attack submarine at Yulin Naval Base on Hainan Island in the South China Sea, The War Zone speculated in its reporting.

The important base sits at a strategic gateway to not only the contested South China Sea but also Taiwan and the Western Pacific.

China likes to hide its strategic assets underground. For instance, the “Underground Great Wall of China” is the name given to the network of tunnels China is believed to use to store intercontinental ballistic missiles.

While the vast, hardened underground tunnel system offers a potential second-strike capability in the event of nuclear war, Dean Cheng, an Asian studies expert at the Heritage Foundation, told Insider that “it is also a way of deceiving your adversary to make sure that they have no idea how many of anything you have.”

In the case of Yulin Naval Base, submarines are most vulnerable at dock, so hiding them in underground tunnels, as has been done in the past, offers a certain degree of protection from potential adversaries, such as U.S. Navy forces patrolling nearby.

But, Cheng explained, “one thing to keep in mind is that the Chinese view information as a resource.”

“They work very hard to make sure that all information is tightly controlled,” he said. “To their mind, it is always in their strategic interest to keep you guessing about where are my boats, how many boats do I have, and for you to be left wondering.”

“Imagine you're playing football and all of a sudden, the other side puts 14 additional people out on the field,” he said. “Your entire playbook just went out the window.

The tunnels at Yulin also make it difficult for an adversary to observe Chinese military preparations and intentions, Carl Schuster, former director of operations at US Pacific Command's Joint Intelligence Center, told CNN.

“You have no evidence of (the submarine's) combat readiness, operational response times and availability,” he said. “Tunnels blind potential opponents to the submarines' operating status and patterns, denying them the ability to determine the state of China's military preparations, knowledge critical to assessing China's intentions and plans.”

Yulin Naval Base has been in use for decades and houses nuclear-powered fast attack and ballistic-missile submarines, among other assets.

The most recent Department of Defense assessment of China's military strength states that the “modernization of China's submarine force remains a high priority for the PLAN.”

The Pentagon expects the submarine force to continue to grow, and China watchers say Chinese subs are becoming quieter and increasingly more capable as the country modernizes its force, making it more of a threat to rivals.