China has refused to grant a U.S. Navy warship permission to make a port call in Hong Kong, the local... 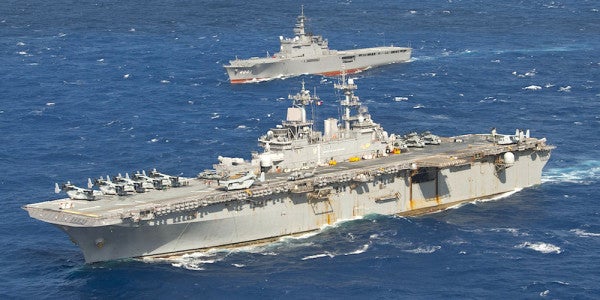 China has refused to grant a U.S. Navy warship permission to make a port call in Hong Kong, the local U.S. consulate reported Tuesday, according to the Hong Kong-based South China Morning Post.

The amphibious assault ship USS Wasp, which carries the F-35B Lightning II Joint Strike Fighter, was expected to visit the former British colony next month, according to The Wall Street Journal. But Beijing has denied the US Navy's request, another sign of deteriorating ties between the US and China.

It is not uncommon for China to deny U.S. port call requests when it is displeased with the countries' relations — as was the case in April 2016, when Beijing refused to allow the aircraft carrier USS John Stennis to visit Hong Kong amid rising tensions in the South China Sea.

Locked in an intensifying trade war, both Washington and Beijing have targeted one another with hundreds of billions of dollars in punitive trade tariffs. The U.S. is criticizing China for economic aggression and unfair trade practices, and China perceives U.S. actions as a clear exercise in containment, an effort by the hegemonic power to cripple the rise of a developing challenger.

The U.S. imposed a 10% tariff on $200 billion worth of Chinese products Monday, and China immediately retaliated with duties on $60 billion in American goods.

Tensions, however, extend well beyond economic exchanges and into military ties. The U.S. sanctioned the primary procurement division of the Chinese military for purchasing Russian weapons systems in violation of sanctions, namely the advanced Su-35 fighter jet and the S-400 surface-to-air missile system. China expressed “outrage” and accused the US of trying to constrain its military power. Beijing warned that it would take “countermeasures” if the US did not “correct its mistake.”

Further complicating matters, the U.S.. has approved a $330 million arms deal with Taiwan that will improve the combat readiness of Taiwan's air assets. Chinese state media strongly urged the US to cancel the deal and suspend military-to-military relations with Taiwan, which Beijing considers a separatist province.

All of this comes as other longstanding issues, such as the South China Sea and the Korean Peninsula, continue to weigh heavily on the relationship between the U.S. and China, two major powers with national interests often in conflict with one another.