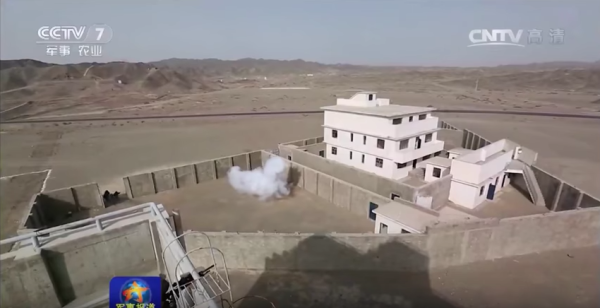 The segment, first noticed by the New York Times, takes place in Xinjiang, a province in Western China home to the Uighurs, a Muslim minority often at odds with China's state-endorsed atheism and their dominant ethnicity, the Hans.

While China has increased its presence in the Middle East as of late, it has also increased raids on Uighur leaders, issuing one strange announcement on November 14, 2015 that compared a 56-day battle against the Uighurs to the ISIS attack in Paris that killed 130.

In the slides below, see details from the Chinese reenactment of the Bin Laden raid.

Putting on a bit of a show here.

Finally we see helicopters descend on another, similar compound.

While the delivery may be a bit garbled, it's clear that China sought to imitate the world's finest in its version of the successful SEAL Team 6 raid. Whether the special forces units will participate in raids against Al-Qaeda-linked targets abroad or simply continue to hit the Uighur minority, they've broadcasted loud and clear that they're proud and ready.

Watch the full video below: