B-52 bombers from Guam have trained with Air Self-Defense Force and Okinawa-based U.S. fighter jets in the Western Pacific, just days after China sent a total of six bombers and other aircraft through a key entryway into the Pacific for their own military exercises 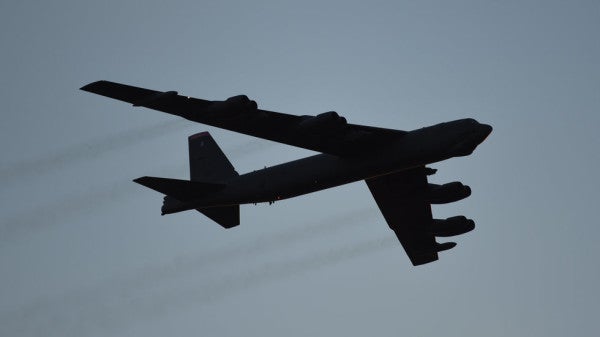 B-52 bombers from Guam have trained with Air Self-Defense Force and Okinawa-based U.S. fighter jets in the Western Pacific, just days after China sent a total of six bombers and other aircraft through a key entryway into the Pacific for their own military exercises.

The mission made for a busy week in the area, with the Chinese Air Force dispatching a total of six H-6G and H-6K bombers, as well as electronic warfare and surveillance aircraft and fighter jets, through the Miyako Strait, international airspace between the Japanese islands of Okinawa and Miyako in the East China Sea, on Monday and March 30.

The Miyako Strait is widely known as the principal entryway for the Chinese Navy into the Pacific Ocean.

The ASDF scrambled fighter jets to intercept the Chinese aircraft in response both times, though Japanese airspace was not violated, according to the Defense Ministry in Tokyo.

Thursday's U.S. training mission with the ASDF was the first since similar exercises over the East China Sea on March 20.

Both missions were part of the so-called continuous bomber presence operations the U.S. military says have been ongoing since March 2004 and are part of the United States' long-standing “freedom of navigation” policies.

The U.S. and Japanese militaries regularly conduct such exercises in the East China Sea, home to the Japanese-controlled Senkaku Islands, and the Western Pacific. Beijing — which also claims the Senkakus and calls them Diaoyu — often dispatches ships and aircraft to the area surrounding the tiny islets.

Training missions such as Thursday's have apparently ramped up amid protracted military and trade tensions between Washington and Beijing, with one mission on March 4 and another in January taking bombers over the East China Sea.

The U.S. has also sent its B-52s over the disputed South China Sea — including two separate flights near some of China's man-made islands there within the space of ten days earlier this month. Beijing has blasted the missions as “provocations.”

China's Foreign Ministry has said no military ship or aircraft could scare Beijing away from its resolve to protect what it says is its territory. China has built up a series of military outposts in the strategic waterway, which includes vital sea lanes through which about $3 trillion in global trade passes each year.

SEE ALSO: US Sends B-52 Bombers Over Disputed South China Sea For Second Time In 10 Days