"I would never have believed that you could live on the ground at 40 (degrees) below zero." 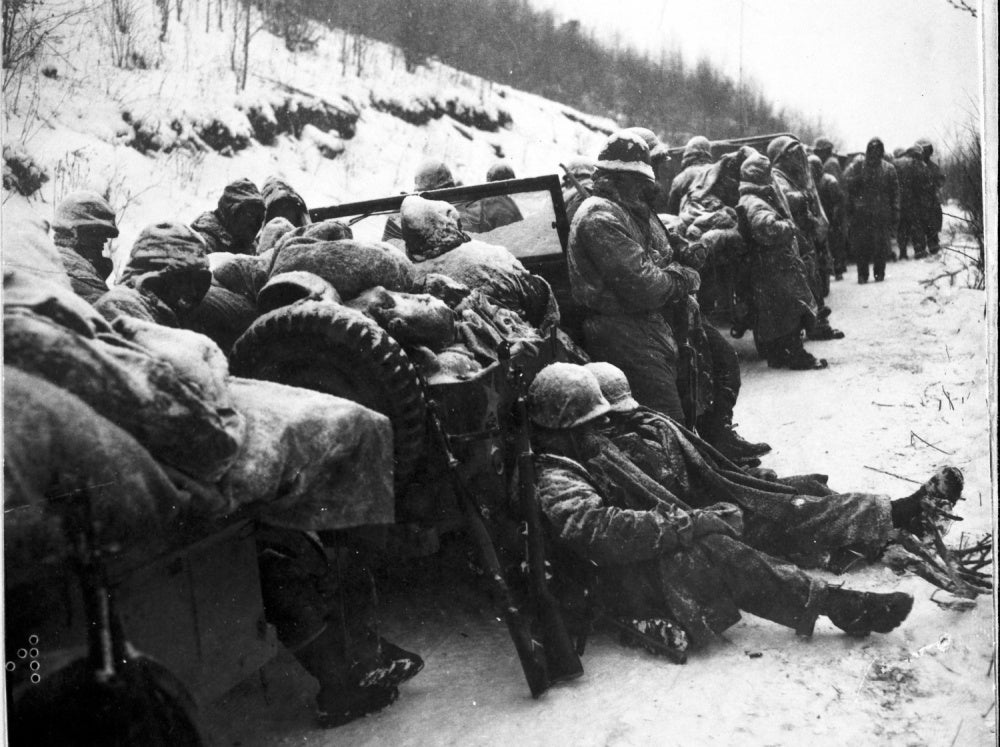 Marines of the 5th and 7th regiments who hurled back a surprise onslaught by three Chinese communist divisions wait to withdraw from the Chosin Reservoir area circa December 1950. National Archives photo.
SHARE

Nov. 29—Even at 88 years old, Jim Valentine finds himself waking up at night and shifting positions in an attempt not to freeze.

“I would never have believed that you could live on the ground at 40 (degrees) below zero,” said Valentine, who 70 years ago this month was among the thousands of U.S. troops encircled by Chinese soldiers on the Chosin Reservoir in North Korea. “You would sleep on one side until it froze, and then you would turn on the other side and rub it.

“I catch myself still doing it in bed today.”

It took Valentine, who signed up for the U.S. Army at 17 as a runaway hoping to escape the hard labor of picking cotton in California, several decades to talk about what happened during that attack that began Nov. 27, 1950. Recalling it now, 70 years later, still causes the longtime Cheney resident to pause, tears welling in his eyes.

“Personnel wasn’t that great. It wasn’t until ’51, ’52, ’53 did people start showing up,” said Valentine, who originally volunteered for what he understood was a “police action” in North Korea that exploded following that Chinese offensive into a full-scale war.

He cleared his throat.

Valentine was a member of the U.S. Army 7th Infantry Division, responsible for covering the Marine Corps’ right flank as U.S. and United Nations forces pushed north toward the Yalu River, the dividing line between Korea and China. He’d landed at Incheon in mid-September and aided what appeared to be a decisive push of the North Koreans back to Communist China, an offensive so successful U.S. Gen. Douglas MacArthur visited the front and told the fighters they’d be home by Christmas 1950.

A force of Chinese soldiers, estimated to be about 120,000 strong, circled U.S. and United Nations forces that totaled roughly 30,000, an offensive that was reported back home as one that might end in annihilation.

MacArthur would later tell the Pentagon following the attacks in North Korea “we face an entirely new war.” President Harry Truman removed him from command five months after the attack.

Communication to the Army forces on the east side of the Chosin Reservoir was poor, Valentine said, and all he knew at the time was that he had to fight to stay alive.

“If it wasn’t for all those ships that came in at Hungnam harbor, they all shelled the complete perimeter that was 32 miles around, and they kept shelling that area so we could, you know, withdraw,” he said.

While the Chinese attempted to pick off the soldiers from elevated positions, it was ultimately the cold of that winter that caused the biggest problem for both sides. Temperatures during the 17-day battle routinely dipped to 20 below zero, and sometimes reached 40 below zero.

A summary prepared by Chinese military leaders after the battle determined that more of their men had died of temperature exposure than gunfire or artillery.

American forces, Valentine among them, later reported symptoms of what’s known as “timebomb consequences” — injuries sustained from the cold that take years to manifest.

Valentine said his colleagues wouldn’t dare light a fire during the battle, for fear of being picked off by Chinese fire or artillery. The only soldiers who did were Turkish forces fighting on behalf of the United Nations.

“The Turks used to build their own fire,” Valentine said. “The Chinese could drop a mortar on you instantly. They just didn’t seem to care.”

At just 17, Valentine said he didn’t appreciate the violence that raged around him.

He looked at fighting in the mountains as an extension of the games of cowboys and Indians he used to play as a child in the shrubby ranchlands of his home in the southwest.

Estimates of the losses vary, but it’s generally believed the U.N. forces suffered casualties totaling more than 17,000, of whom 6,000 were killed or reported missing. The Chinese lost about 19,000 to fighting, and many more to the elements.

The battle was a Pyrrhic victory for the Chinese, who managed to force U.N. soldiers out of North Korea. But they were unable to destroy them, as Mao Zedong ordered, and the war ended in a stalemate three years later.

After the war, Valentine received a Bronze Star, “just for surviving,” he said. He also received a Purple Heart for a gunshot wound to his backside and other decorations he felt he didn’t deserve.

Valentine left the Army with the rank of first sergeant. But the war didn’t leave him. He said he used drugs and committed some crimes before meeting his wife, Beth, who has helped him cope with the memories of combat.

“I run around the country, screwing everything up until I met her,” he said.

“A good woman does that every time,” Beth Valentine said, smiling.

Beth Valentine would work staggered shifts with her husband as they raised their children in an effort to avoid having to leave them with babysitters. Some nights she’d come home and her husband would already be asleep.

“The first night I came home, and I leaned over to kiss him, to let him know I was home,” Beth Valentine said. “And he knocked me across the room. It was just a reaction. So, after that I would crawl into bed, and then kiss him.”

It was after Valentine joined the local Veterans of Foreign Wars post at the urging of a fellow veteran that he began to feel comfortable talking about the war. He also visited the Korean War Memorial in Washington, D.C., as part of the Honor Flight program. He received letters from family members as part of the trip, thanking him for a service to his country he stumbled into as a teenager but left him with memories he spent several years trying to suppress.

“The VFW here in Cheney helped me more than anything, by just letting me talk about it,” he said.

The memories are hard to escape, especially in a year when the Valentines have been confined to the home they’ve shared in Cheney for more than 30 years. The couple bought a motor home just before the pandemic hit, hoping to travel across the United States and Canada, but those plans were dashed like so many others in 2020.

Jim Valentine would like to return to the country where he fought 70 years ago.

Valentine was part of a force that twice liberated Seoul, the capital of South Korea, first in September 1950 after landing at Incheon and again in March of the following year, after it was captured by the Chinese.

His only memories of the city are of a bombed-out metropolis with no buildings taller than two stories.

“I don’t know if it’ll ever happen, because I’m 88 years old,” said Valentine, who also recently lost weight with his wife in an effort to stay healthy. “So I can get around now, pretty good. But with everything in the world what it is today, it’s just hard.”