The technology has changed drastically from the days when the 76-year-old Peters had to write the caller's information on note cards. 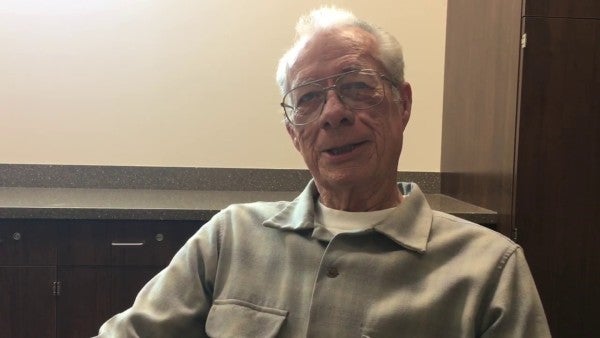 STOCKTON — Ray Peters sits at his desk looking at the four computer monitors in front of him.

The technology has changed drastically from the days when the 76-year-old Peters had to write the caller's information on note cards.

There were rotary phones back then, he said with a slight laugh.

The Stockton CHP office two weeks ago publicly recognized Peters during National Public Safety Telecommunication Week for his 50 years of duty service and he was awarded the Division Chief's Commendation. And in September 2016, Sen. Cathleen Galgiani, D-Stockton, passed a resolution recognizing Peters for his service.

Peters started his career as an officer with the CHP on March 23, 1966. After completing his academy training, he patrolled the San Francisco area before transferring to the Stockton office in 1971.

The Air Force veteran joined the CHP out of a desire to pursue a profession that would allow him to help people, he said. His time as a medic in the military prepared him for emergency service and law enforcement seemed like a good career move.

And for 15 years, Officer Peters helped motorists and chased bad guys, but two on-duty crashes resulted in a fractured shoulder blade and three damaged vertebrae requiring him to retire medically.

It was, however, a short-lived retirement. Peters tried putting his accounting degrees to use, but it was too boring for the former officer.

“I just wanted to come back,” he said. “I missed the excitement. The adrenaline rushes.”

Peters said it took three years to have a back surgery appointment approved by the state, but once he was able to have his worst vertebrae fixed, he could function again and he got to work on his comeback to the CHP.

At the time, people who retired under the Public Employees Retirement System couldn't return to work for an agency that had CalPERS, Peters said. But he spent three days in the state Capitol “pitching my spiel.”

On Aug. 1, 1984, Peters returned to the CHP Stockton office as a public safety dispatcher, where he still works today.

“I think the job is what's keeping me young and active,” he said. “I'm 76 and here I'm still going strong and doing fine.

“As long as my mind is sharp enough to handle the traffic we have on the phones, and I can physically move around, I'll stay.”

Peters said he's proud of being the CHP's longest-serving employee — an honor the agency bestowed on him after a woman in Chico who had two months on him retired.

Rena Crutchfield, the public safety dispatch supervisor at the CHP Stockton office, called Peters a wonderful man with a great work ethic and a team player.

“He's here every morning at least 45 minutes early if not an hour,” she said. “He's a great guy.

“His knowledge and experience come in handy any time anyone needs help.”

Peters, who still has the same lean frame from his rookie years on patrol, said his wife, Nancy, is supportive of his decision to continue working because she knows it is what is keeping him moving and thinking.

And while the 12-hour shifts can be demanding, it's well worth it to him.

“It gives me a reason to get out of bed in the mornings,” he said. “I'm glad I chose this and glad I stuck with it.”

The 11 best photos of the US military in 2018, according to an award-winning Army photographer

This California community is a model haven for homeless veterans. Now the VA is shutting it down