Yeager was 24 when he became the first man to break the sound barrier, Oct. 14, 1947, over Edwards Air Force Base, Calif. 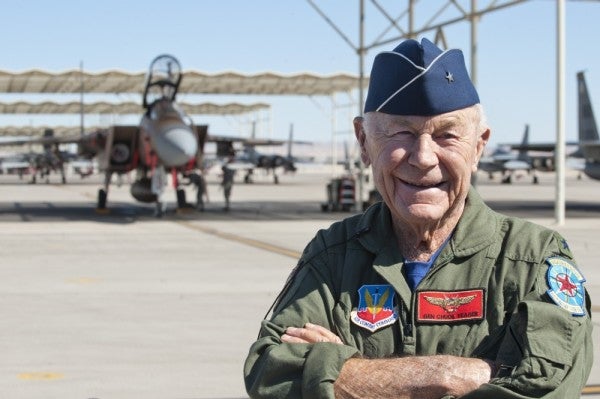 Today is Chuck Yeager's 97th birthday, and it's a great time to revisit the historic test pilot's ties to Wright-Patterson Air Force Base.

Yeager, of course, was the pilot who ensured that the sound barrier was no longer a barrier.

He was the first pilot in history confirmed to have exceeded the speed of sound in level flight. When his bullet-shaped Bell X-1 broke the sound barrier 45,000 feet above the Southern California desert, much of that technological power was tied to what was then Wright Field here outside Dayton.

“It proved that the so-called sound barrier was no barrier whatsoever,” Bob van der Linden, curator of special purpose aircraft at the National Air and Space Museum in Washington, D.C., told the Dayton Daily News in 2017, then the 70th anniversary of Yeager's historic flight.

Then as now, Wright Field was the beating heart of much Air Force research and development, and in the 1940s, work there helped pave the way for supersonic flight. Yeager flew military planes here before moving to California, said Doug Lantry, historian at the National Museum of the U.S. Air Force at Wright-Patterson.

“In the case of the X-1, the people at Wright Field really were the ones who defined what the problems were that needed to be studied and how to approach those studies,” Lantry said in 2017. “Wright Field was sort of the nerve center … of approaching this problem and how to solve it.”

In July 1945, Yeager became a maintenance officer at Wright Field, a job that entailed flight-testing the field's variety of planes, according to ChuckYeager.org.

Yeager went on to break other speed and altitude records and to serve as a consulting civilian test pilot.

Yeager formally retired from the Air Force in March 1975 as a brigadier general. In the 1980s, Yeager worked with General Motors, publicizing AC Delco, the company's automotive parts division, which had its own Dayton connections.

In 1986, he drove the pace car for the Indianapolis 500 and has been in high demand for public appearances over the years.