"This is not a company that sells burritos," said Yeager's lawyer in an interview. "It sells aircraft, and you can't find a man more valuable to associate with aircraft than Chuck Yeager." 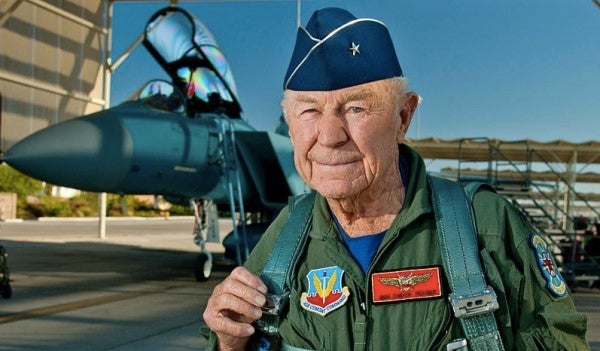 (Reuters) – Chuck Yeager, the retired U.S. Air Force pilot who broke the sound barrier, has sued Airbus SE, accusing the aerospace company of using his name and likeness without permission to promote a new high-speed helicopter.

In a complaint filed on Wednesday that refers to him as “one of the most, if not the most, famous pilots of all time,” the 96-year-old Yeager objected to a June 2017 piece on Airbus' website about making the Airbus Racer a fast and cost-effective way to fly.

The piece quoted Guillaume Faury, now Airbus' chief executive officer and at the time Airbus Helicopters' CEO, as saying: “Seventy years ago, Chuck Yeager broke the sound barrier,” and Airbus was now “trying to break the cost barrier. It cannot be 'speed at any cost.'”

Yeager accused Airbus of trademark infringement and taking away his right of publicity through “fraudulent” conduct, in which it deceived the public into believing he endorsed it.

“This is not a company that sells burritos,” Yeager's lawyer, Lincoln Bandlow, said in a telephone interview on Thursday. “It sells aircraft, and you can't find a man more valuable to associate with aircraft than Chuck Yeager.”

Airbus spokesmen said the company, which is headquartered in Toulouse, France, had no comment on pending litigation.

Yeager is seeking unspecified compensatory, punitive and reputational damages, as well as restitution, in a lawsuit filed in the federal court in Santa Ana, California.

He has filed similar lawsuits against other defendants in the past.

Yeager became the first person to break the speed of sound, known as Mach 1, piloting his rocket engine-powered Bell X-1 over southern California on Oct. 14, 1947.

He became familiar to a younger generation 36 years later when the actor Sam Shepard portrayed him in the movie, “The Right Stuff,” based on the Tom Wolfe book.

Yeager said the website piece was not Airbus's first use of his name and likeness without permission, saying it previously used an unauthorized video of his 2008 visit to the company.

He said Airbus Helicopters had asked for permission to use his name in press releases, but rejected his demand for more than $1 million and veto power over how it was used.

“There were some negotiations but they fell through, and litigation was unfortunately the next course,” Bandlow said.