Cleveland Clinic chief Toby Cosgrove has withdrawn his name from consideration as secretary of the Department of Veterans Affairs, a... 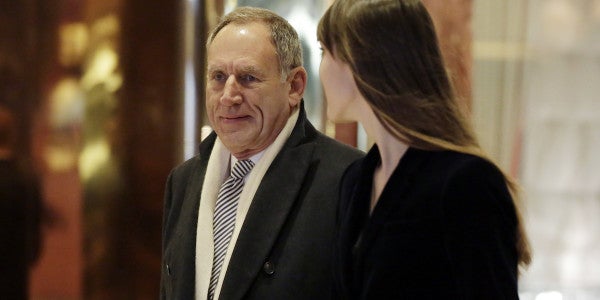 Cleveland Clinic chief Toby Cosgrove has withdrawn his name from consideration as secretary of the Department of Veterans Affairs, a post that would have put him in charge of the health care and benefits of more than 20 million U.S. veterans, a source familiar with the matter said.

Chief aides of President-elect Donald Trump wanted Cosgrove for the job, but asked him to tell them if he could make the commitment before they made the offer, the source said.

They stressed the importance of the role, saying reforms at the VA are one of Trump’s priorities. Cosgrove spent time considering that, and then came back and said he couldn’t get out of the Cleveland Clinic commitment, the source said.

Cosgrove, a former military doctor, was considered the front runner for the job after his most recent meeting Wednesday with Trump. Several others have been under consideration, including Luis Quinonez, head of IQ Management Services, a multibillion-dollar company that provides health-care services to the military. A Vietnam veteran who was born in Guatemala, Quinonez has been active in Republican Party politics and, if elected, would be the first Hispanic Trump has nominated to a Cabinet-level position. However, according to Military Times, Quinonez has also withdrawn his name from consideration.

VA secretary is one of the few top jobs left for Trump to fill. The agency has been under scrutiny since 2014 for its long wait times that have left tens of thousands of veterans struggling to get care. President Barack Obama’s first VA secretary, Eric Shinseki, resigned in May 2014 after the scandal erupted, and the administration has since sought to improve care in the VA health system. But veterans’ groups say progress has been slow.

In addition to overseeing the health care of the country’s more than 20 million veterans at 1,700 facilities, the agency also handles veterans’ benefits such as education grants, home loans and life insurance. It also operates 135 national cemeteries.