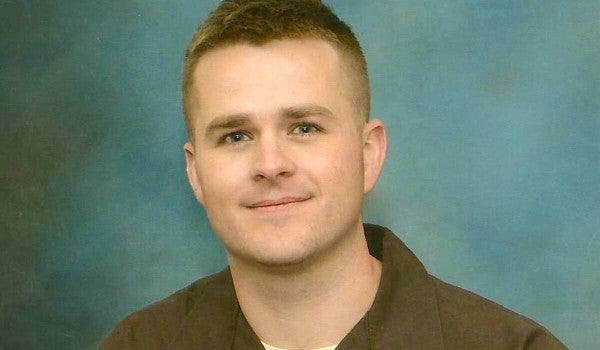 A former U.S. Army lieutenant convicted of murdering two men in Afghanistan, and now imprisoned in Kansas, is asking a federal judge for a new trial.

During Clint Lorance's military trial, prosecutors characterized the victims as village elders. But Lorance and his legal team allege they were terrorist bomb makers — and that prosecutors withheld that evidence from the jury.

The 34-year-old was convicted of two counts of murder and one count of attempted murder in August 2013. He is serving a 19-year sentence at Leavenworth.

“This is a situation where the Constitution was basically thrown in the trash can,” said attorney Don Brown, who's based in Charlotte, North Carolina “Clint should have the right to bring that evidence before a jury.”

Lorance, who's from Oklahoma, last year sought to have his conviction overturned.

The government opposes the request, a spokesman for the U.S. Attorney's Office in Kansas said. Court documents argue that Lorance didn't know the men had ties to terrorist activity when he gave orders to fire on them.

Other troops who served with Lorance also have said he was guilty.

On July 2, 2012, Lorance was leading a platoon from an army outpost to a village in Kandahar Province in Afghanistan. It was his third day as a platoon leader and second time leading a combat patrol. His first had been the previous day.

The soldiers moved through rows of a grape field in an area where the platoon had been attacked in previous months, according to court documents. One soldier had been shot in the throat and paralyzed. The former platoon leader was injured when an improvised explosive device blew up in his face.

Lorance, who was 28 at the time, was the replacement.

When three men riding a motorcycle approached the platoon from a road known as a “Taliban safe haven,” Lorance issued a radio order to a machine gunner who fired, killing two of the riders. The third escaped.

“Lorance, who was responsible for protecting the men and believed their lives to be in danger, ordered fire,” his petition said.

A paratrooper reported one of the motorcycle riders was a village elder, triggering an investigation into potential civilian casualties and Lorance's prosecution.

When an IED in Afghanistan explodes or is defused, the military may collect fingerprints or DNA left on wires or other bomb parts.

According to Lorance's petition, fingerprints had been left on bomb components from IED events by one of the men killed and the man who escaped.

“The prosecutor did not bring the terrorist evidence to the attention of the military judge,” the petition said. “The bombmaking information was not before the jury, either during the trial phase on the merits, or during the sentencing phase.”

Brown said the biometric data found on the IED components were crucial to the case because it's lawful to kill enemy combatants.

Lorance's Kansas-based attorney, Christopher Joseph, said withholding that evidence was “the single most egregious violation and one which is really not defensible.”

The prosecutor engaged in misconduct, the petition alleges, by withholding the biometric data and a report that found the platoon was being scouted for an impending ambush. It also argues that even if the victims had been civilians, as the prosecution portrayed, their deaths “although regrettable, are not murder but 'collateral damage.'”

The U.S. Attorney's Office in Kansas is fighting Lorance's request for a new trial.

The data wasn't relevant because Lorance didn't know the men were linked to terrorist activity before ordering to fire, Assistant U.S. Attorney Jared Maag wrote in a response to the petition.

Additionally, the men didn't pose an immediate threat and were unarmed, he said.

Prosecutors at Lorance's military trial said he was an aggressive soldier whose first acts as platoon leader included threatening the life of an Afghan child and ordering indiscriminate firing into a village.

Nine members of Lorance's platoon testified against him during the trial. Lorance's attorneys said the witnesses were granted immunity in exchange for their testimony.

But members of his platoon have continued to denounce Lorance's actions.

Todd Fitzgerald served with Lorance during the three days he was platoon leader.

“Clint Lorance absolutely does not deserve to have his convictions vacated,” Fitzgerald said.

In three days, Lorance displayed a pattern of misconduct, Fitzgerald said, culminating in murder. The murders broke down the relationship the platoon had built with the local villagers, he added.

U.S. District Judge John Lungstrum is considering Lorance's requests for discovery and an evidentiary hearing. He will ultimately decide if Lorance received his constitutional rights and whether the conviction stands.

In May, Trump granted clemency to a former Army lieutenant convicted of murder, according to the U.S. Department of Justice.

A White House spokesman declined to comment on Lorance's case.

Brown said Lorance is “a model prisoner” who has lent support to other military prisoners sent to the U.S. Disciplinary Barracks at Fort Leavenworth.

“He's a very, very positive young man,” Brown said. “He has a saying, 'never give up, never give in.' It's a life philosophy for him.”