Clint Lorance ordered me to kill Afghan civilians. I still live with that guilt today

'I am angry and let down that Clint Lorance is feted around like some hero, while the real heroes—Nick Carson, Matt Hanes, James Twist—are ignored' 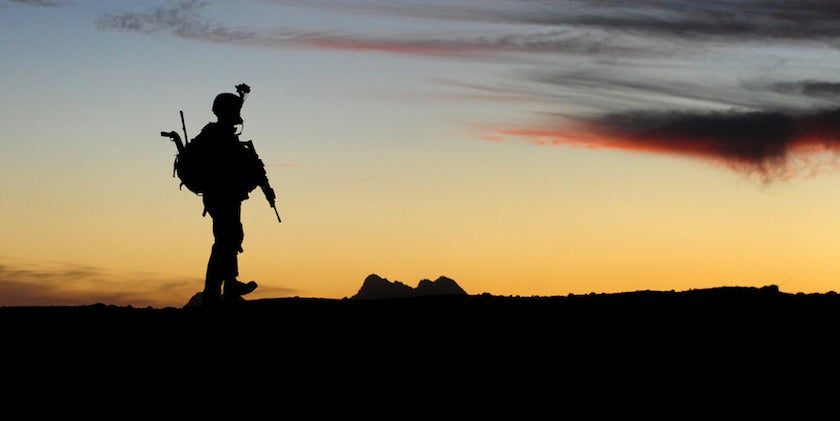 My name is Mike McGuinness. At one point in my life, I was a staff sergeant in the United States Army. I spent 12 of my 16 years in as a paratrooper, a member of the 82nd Airborne Division. I was also an infantryman, and I drank all the Kool-Aid that came with it: I believed that I was better than the “legs” who made up the majority of the Army; I wore my beret out of official Army regulations, with the flash at a jaunty angle over my left eye and pulled it so low I couldn’t see out of my right; and I thought I was going to do some good.

But in 2012, as a member of 4th Squadron, 73rd Cavalry Regiment, I ended up serving with Clint Lorance. Everything changed for me in three days.

We deployed to southern Afghanistan in late February 2012. While my troop waited for transport into theater from Manas, Kyrgyzstan, I found out my grandfather had passed and that a friend, Staff Sgt. Jordan Bear from our sister battalion, had been killed in a green-on-blue incident. This wasn’t the start I had been expecting.

Eventually we found our way to Afghanistan and got down to business. If you ask anyone who has served down in that part of Afghanistan, they will tell you the locals are still loyal and supportive to the Taliban, so the fighting was hard: heavy firefights and multiple patrols a day, coupled with trying to fight the enemy and counter the heavy improvised explosive device threat. It sucked, but it’s what we signed up for.

We ended up shifting to Zharay, outside a small village called Payenzai. The patrols got longer, and the firefights even nastier—but we were making inroads with the people in the area. They started to talk to us. The villagers finally started to interact with us, and I can honestly say we had high hopes.

As we started making inroads in the district, the attacks against us picked up. In a short period of time, our original platoon leader, Dominic Latino, was wounded; so were Mark Kerner, Sam Walley (who would lose an arm and a leg in an IED blast), and Matt Hanes, who would be left paralyzed because of his wounds.

But we kept moving. I was beyond proud of the boys and how they handled everything.

As the weapons squad leader of the platoon, I was the No. 2 enlisted man, with Sgt. 1st Class Keith Ayres as the platoon sergeant. We ran things for a few weeks, and then we were told a new lieutenant would be joining us: Clint Lorance.

I’m not going into depth on what happened, as it’s been covered in multiple outlets, but on a patrol on July 2, things went awry. That day, I lined up in the rear of the formation with my gun team, and we moved out. A gun truck would mask our movement into the village and provide us some extra cover.

The radio began to crackle, confirming what my eyes saw: A huge plume of dust and grit moved toward us. What I couldn’t see from my vantage point was how many people were moving in our direction, but we knew the dust cloud meant a motorcycle.

The radio screeched again, and I heard the radio carrying the message from Lorance to engage the motorcycle. I screamed into the handpiece of my radio to ignore the order, and then I began moving toward Lorance and his position within our formation.

I was too late; the machine gun barked, and two innocent civilians were killed. Later on in that same patrol, my gun team and I dealt with a contact of our own from a rooftop inside the village: Two Afghan men were talking on a radio. “We have to do something to the Americans,” one of them said. Our commander gave us permission to fire, and we did. After we got back to our combat outpost, we took more fire.

I knew something was very wrong. But I didn’t know how bad it would get.

Within 24 hours, my gun team, along with Lorance, were pulled from the platoon to be interviewed by Army Criminal Investigation Division agents from an Army Reserve unit out of California. Even though the gun team and I got clearance from our commander, Capt. Pat Swanson, to engage the Afghan men on the radio, we were being charged with murder. And trust me, you haven’t had your stomach drop quite like it does when you’re presented with a charge sheet with your name and “murder” on it. This is when things began to change for me.

My squadron command was nowhere to be found. The men who could have protected me, and more importantly, my soldiers, were absent and not providing us with any cover. Getting an attorney proved troublesome—the closest Army legal officer was in Bagram, and I only had contact with her through email.

I felt abandoned by my command and betrayed by the Army.

A soldier on patrol that day had killed one of the village elders and a relative, so the goodwill we had built up was completely spent. After all that work, it was wiped out in a single day, and the locals actively assisted anti-coalition forces and picked up their attacks on us.

Things went haywire when we got home. I was given a GOMOR—a letter of reprimand from a general—for my actions on the rooftop, and for not actively doing enough to stop Lorance. I was cleared of murder because I acted within our rules of engagement, but I knew that my career was as good as done. The squadron command team swapped out almost as soon as we got home and so did the brigade command team. They essentially washed their hands of us and left us to our fates.

Nine of the guys on that patrol would testify in the trial; I provided written and recorded testimony. On Aug. 1, 2013, Lorance was found guilty of second-degree murder, attempted murder, filing false reports, and a few other charges. I thought the ordeal was done.

It wasn’t. I spiraled out of control. I began drinking heavily, hating myself for not doing enough to stop what happened. When we got back, I wasn’t in command of anything and was relegated to the training room. It left me plenty of time to be alone with my thoughts, which wasn’t what I needed. I knew I needed to get help, but I was too proud to do so. I felt like I was a failure; I had wrapped myself up in being a soldier, and I hated myself for it.

The death threats began in 2014 when we started speaking out against Lorance’s supporters. He had a ton of support from former congressman Allen West, as well as the Fox News crowd. Our voices were drowned out. I was called a traitor, and some within my own command thought the same. I drank heavily and got a DUI. I only made my feelings of inadequacy worse.

So, I tried to kill myself.

I continued therapy, and even went to school, graduating this past August with undergraduate degrees in history and journalism. I kept speaking out against Lorance and did multiple interviews to support projects concerning the case; a documentary, Leavenworth, came out on Starz, and this summer Greg Jaffe from the Washington Post wrote a long feature, as did Nate Penn for California Sunday Magazine. We were finally being heard by a large audience. But shortly after the premier of the documentary, President Donald Trump pardoned Lorance, and Lorance was freed from prison.

We lost more soldiers after we got home than we did on deployment. Mark Kerner died of cancer that was diagnosed after he was evacuated because of his injuries. Matt Hanes would die of an aneurysm. Jarred Ruhl would die of a gunshot wound. Nick Carson died in a car crash. James Twist would take his own life.

I bring up all this to say that I’ve done more than take the uniform off: I’ve separated myself from the thoughts of, “I’m just a soldier.” I don’t announce that I served—I don’t want to be solely identified as veteran. It took a lot of work, but I had to learn that being a friend, father, family member, and student were just as important, if not more so, as being a vet.

Before I get to the next part, I want everyone to know that I’ve accepted my own foibles and responsibilities for the things that I did wrong to derail my career. I can’t begin to convey how sorry I am to have let my leadership, subordinates, and family down with my selfish actions—the decision to drive drunk, to ignore my family, to self-medicate with alcohol, to not get help in a timely manner. I failed at these things, but learning to accept responsibility for my actions is an important part of my own growth and healing.

With that said, I feel let down by the military as an organization. Not my platoon members or fellow vets, but by the lack of support we received from our command and how our voices were ignored for so long. I feel let down that Lorance was released from prison when he has shown absolutely no remorse for what he did and has become a cause célèbre within the conservative political movement in the country. I feel let down that the Army knew my soldiers suffered a moral injury, and they didn’t give a damn. Worst of all, I am angry and let down that Clint Lorance is feted around like some hero, while the real heroes—Nick Carson, Matt Hanes, James Twist—are ignored.

As I reflect on my service, I know I’ll forever be intertwined with Clint Lorance, something I am not happy about. Despite that, I can say I’ve been given more good than bad from my service: I’ve made lifelong friends who I consider family, and we’re still insanely close. I learned what it was to work hard. And I learned that doing the right thing is the most important thing that I can do. It’s a lesson I took to heart, and put into practice during the Lorance ordeal. And it’s something I’ll do for the rest of my life.

Mike McGuinness served in the U.S. Army for 16 years, spending 12 of those in the 82nd Airborne Division. After leaving the service, he attended the University of North Carolina-Pembroke, earning degrees in history and journalism. He works as a freelance writer and journalist.