Update: Baldwin has apologized on air for her remarks. You can watch her apology here. CNN journalist Brooke Baldwin has... 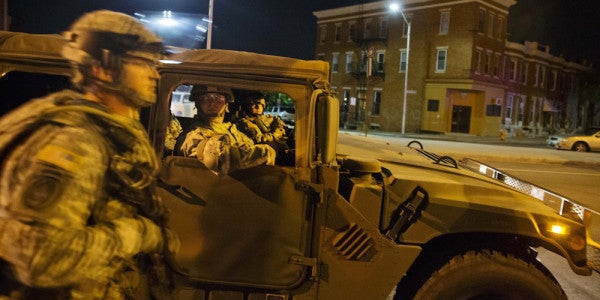 Update: Baldwin has apologized on air for her remarks. You can watch her apology here.

CNN journalist Brooke Baldwin has drawn scrutiny for remarks she made about American veterans. The comments were delivered in the context of an interview with Maryland Democratic Rep. Elijah Cummings surrounding unrest and riots in Baltimore, Maryland, in response to the death of 25-year-old black man Freddie Gray while in police custody.

Baltimore is the latest in a string of national stories about police tactics and racial divisions in modern America. These stories began in Ferguson, Missouri, in August 2014. In the past several months, they’ve echoed in racially charged incidents in Ohio, Wisconsin, New York, South Carolina, and many other communities. There’s a messy, but a monumentally important conversation happening in this country about what divides us, about justice, and about inequality.

Baldwin, however, in her April 28 interview with Cummings, took that conversation in a baseless and destructive direction, blaming veterans of the wars in Iraq and Afghanistan for problems with police brutality in modern America.

“I mean, we talk about training, we talk about having officers – I was talking to the city councilman last week who was saying, Brooke, these people have to live in the communities,” Baldwin said. “There's no emotional or there’s a lack of emotional investment and a lot of these young people — I mean, I've been talking about there so much. A lot of young people — and I love our nation's veterans, but some of them are coming back from war, they don't know the communities, and they're ready to do battle.”

There’s a lot wrong with this statement. Baldwin suggests that young police officers who are military veterans are not emotionally invested in the communities where they have returned, that they don’t know those communities, and that they are “ready to do battle.”

This story strikes a personal chord with me. I got out of the Marine Corps in 2013, came home to the community where I grew up — where my family still lives — and have worked every day since to be the best citizen that I could be. When I spent seven months in Afghanistan from the summer of 2011 through the spring of 2012, I imagined coming home and rejoining my community. It pains me now to have returned to a domestic society that is so politically, sociologically, and culturally fractured.

As if that weren’t enough, Baldwin, a journalist, just blamed my generation of veterans for causing that division and fracture. There’s a visceral societal reaction that occurs when someone says something that could be perceived as anti-military. That’s why Baldwin had to preface her critique with, “and I love our nation’s veterans.” Loving the troops is a prerequisite to being a public figure in modern America. And that’s a dangerous thing. People with platforms and influence like Baldwin profess love for veterans and the military without understanding them.

Baldwin’s remarks reflect a deep and damaging ignorance about modern veterans — that all veterans know how to do is “wage war.” It’s an ignorance about the motivations that lead men and women to join the modern military, an ignorance about the training modern service members receive, and an ignorance about what the wars in Iraq and Afghanistan required of its men and women in uniform. In actuality, complex counterinsurgency and counterterror operations often measured success more in how military forces were able to keep people alive and keep situations stable. There’s a lot more to service than kinetic military actions like dropping bombs and pulling triggers that color the caricatures of the modern military reflected in Baldwin’s comments.

If anything, veterans and members of the modern military have served as credible critics of ineffective and aggressive police tactics. In August 2014, the Washington Post published a piece written by Marine infantry veteran Thomas Gibbons-Neff outlining how veterans of Iraq and Afghanistan saw deep flaws in the overbearing and militant actions of local police forces in Ferguson.

“For veterans of the wars that the Ferguson protests so closely resemble, the police response has appeared to be not only heavy-handed but out of step with the most effective ways for both law enforcement and military personnel to respond to demonstrations,” Gibbons-Neff wrote.

And amid national reports of violence-prone police officers, earlier this month, body camera footage from Ohio police officer Jesse Kidder made national headlines. The video showed the officer refusing to shoot a murder suspect who was charging toward him. The man was literally begging to be shot. The video shows Kidder fall to the ground backing up, his weapon raised all the while, and eventually, the man gives up. The story was praised as an example of bold restraint in stark contrast to stories of unarmed men being killed at the hands of the police. Some pundits suggested that he was hesitant to shoot in consideration of the current political climate, knowing that his body camera was recording. Lost in much of the coverage was the reality that Kidder was a Marine Corps veteran of the Iraq War. Many veterans who followed the story saw hallmarks of military training and experience — a profound understanding of the use of force matrix and a desire to exhaust every possible option before resorting to deadly force.

“This Devil Dog has conducted EOF or escalation of force a time or two in his life,” Task & Purpose contributor Chad Russell said on Facebook, himself a Marine infantry veteran of Iraq’s fierce Battle of Fallujah. “Nice work and way to save a life!”

In reality, contrary to Baldwin’s sentiments, there’s been a shift in how this new generation of veterans has organized after the military. While venerable veteran organizations like the American Legion or the Veterans of Foreign Wars have struggled to identify with or recruit from the modern ranks of men and women, a new league of veterans organization has emerged. Organizations like The Mission Continues and Team Rubicon exist for the sole purpose of harnessing the incredible skills and experiences of modern veterans in service to their communities and of the greater good. The Mission Continues connects recently transitioned veterans with volunteer efforts at charities in their local communities. Team Rubicon allows modern veterans to work as first-responders, committing their skills toward disaster relief in America and around the world.

These organizations exist in part because modern veterans are far too often returning home to communities they struggle to relate to; but they aren’t doing so with the intent of waging any sort of war, and that challenge is only compounded with remarks like Baldwin’s. What Baldwin said vilifies modern veterans. It renders us blood-thirsty, war-damaged victims who are making the situation back home worse. It’s an asinine, unfounded, and unconscionable claim delivered by someone purporting to work in the interests of truth and education that underscore journalism.

Baldwin immediately walked the remark back, saying on Twitter, “Folks. Please don't misunderstand me. Dear friends/family of mine are veterans. I was repeating a concern vocalized to me lately. That's it.”

Two hours later, Baldwin took more accountability for her words with an apology, again on Twitter.

“I am sorry for what I said earlier about veterans. It was wrong and I apologize to anyone who was hurt by my comments,” she said.

This apology is not good enough. Baldwin falsely characterized veterans as antagonists in a story military service members had nothing to do with. Her remarks called for accountability and training for the police and veterans community. In correcting the mistake, a similar level of accountability is needed. At a minimum, an on-air apology is appropriate; Twitter doesn’t cut it. But perhaps Baldwin could take this as a learning opportunity, a chance to grow her understanding of the actual military veteran population. Maybe, moving forward, she can use her platform and talents as a journalist to tell stories of veterans who are working to improve American society, or of the diverse and dynamic training those veterans gained while serving in the name of that society.