A Homeland Security and counterterrorism advisor appeared to take some of the blame for the confusion wrought by President Donald Trump's presentation of a chart of Hurricane Dorian's path. 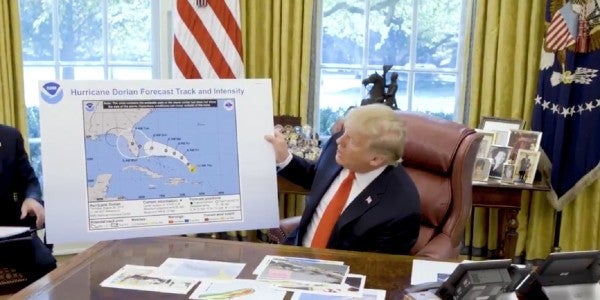 A Homeland Security and counterterrorism advisor appeared to take some of the blame for the confusion wrought by President Donald Trump's presentation of a chart of Hurricane Dorian's path.

In a statement presented by the White House, US Coast Guard Rear Admiral Peter Brown said Trump's comments regarding Hurricane Dorian's chance to hit Alabama were based on a briefing.

“I showed the President the official National Hurricane Center forecast, which included the 'cone' that projects the potential path of the eye of the storm,” Brown said. “The President and I also reviewed other products, including multiple meteorological models … and graphics that displayed the time of onset and geographical range of tropical storm force winds, storm surge, and rainfall. These products showed possible storm plots well outside the official forecast cone.”

“The President's comments were based on that morning's Hurricane Dorian briefing, which included the possibility of tropical storm force winds in southeastern Alabama,” Brown said.

A White House source familiar with the matter said that Trump personally directed Brown to give the statement, according to CNN.

The confusion began on Sunday, when Trump claimed that “in addition to Florida – South Carolina, North Carolina, Georgia, and Alabama, will most likely be hit (much) harder than anticipated.”

The National Weather Center in Birmingham, Alabama, immediately responded by clarifying that the state “will NOT see any impacts from #Dorian. We repeat, no impacts from Hurricane #Dorian will be felt across Alabama. The system will remain too far east.”

Trump did not back down from his assertion, saying Alabama had a chance to be hit by Hurricane Dorian, based on maps and models he said he saw. But the “ spaghetti plot” he provided as evidence on Twitter did not include critical factors that determine a more accurate prediction of the trajectory of the storm's path. It did not include information about wind speeds, and showed the possible routes based on atmospheric conditions and the path of previous storms.

The plot map Trump revealed also noted on the bottom that “if anything on this graphic causes confusion, ignore this entire product.”

Brown's statement did not include who had drawn an additional cone to include Alabama on a map Trump presented on Wednesday.

The White House appeared to stand firm over the controversy, which fueled viral memes of pictures edited with a black marker.

On Thursday, White House press secretary Stephanie Grisham fired back at CNN, which extensively covered what is being dubbed as “Sharpiegate,” and mocked the network for labeling Alabama as Mississippi on a graphic.

“Hi @CNN, I know you guys are busy analyzing lines on a map, but perhaps you use your time to study up on US geography,” Grisham said on Twitter.

CNN's communications team responded by saying it “made a mistake” and fixed it “in less than 30 seconds.”

“And now we are admitting it,” the company said on Twitter. “You all should try it sometime.”