Expensive brass gongs and bells are being stolen from navigational buoys off the coast of Maine, and the Coast Guard... 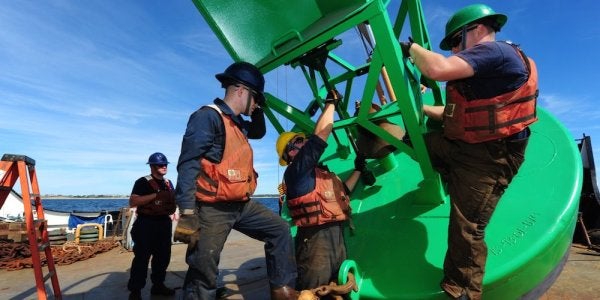 Expensive brass gongs and bells are being stolen from navigational buoys off the coast of Maine, and the Coast Guard is asking for help to track down whoever is pilfering them.

Six buoys have been hit over the past six months, according to Lt. Chellsey Phillips, spokeswoman for the South Portland Coast Guard Station.

“If a buoy doesn't have all of its components, it can cause problems,” Phillips told the Portland Press Herald.

The space in which a sound-signaling brass bell typically hangs on this offshore buoy is empty after the bell was stolen, off the coast of Maine.U.S. Coast Guard

“They also create a burden and expense to the taxpayer for the buoy tenders and crews responsible for maintaining the aids,” Odom said in a statement.

The Coast Guard suspects the “high-dollar devices” are likely being sold to novelty stores or scrap-metal yards.

Federal officials are working with local police, retailers, and scrap yards to suss out those involved in the thefts.

Tampering with the navigational aids is a federal crime that can be punished with up to a year in prison and fines of as much as $25,000 a day.

The Coast Guard is seeking help from the public, asking anyone with knowledge about the missing sounding devices to contact Coast Guard Sector Northern New England.

Anyone with information that leads to a conviction could get up to half the value of the fine imposed, the Coast Guard said.

This is not the first time the Coast Guard has had to address the public about its buoys in New England.

In April 2017, the Coast Guard in Rhode Island asked people to stop shooting at buoys there. At the time, one Coast Guard crew found a buoy that had been peppered with 20 bullet holes and sunk, creating a navigation hazard.