The head of the Coast Guard talked about the service's response to the coronavirus outbreak and whether it would follow the Marine Corps' lead in banning the confederate flag at its installations. 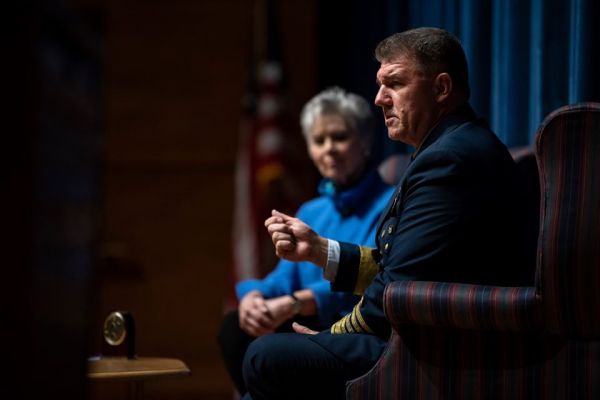 New London — The head of the Coast Guard talked about the service's involvement in the response to the coronavirus outbreak and whether it would follow the Marine Corps' lead in banning the confederate flag at its installations, during a wide-ranging discussion with Jeanne Meserve, former CNN Homeland Security correspondent.

Each month, 4,000 vessels come into American ports, and with confirmed cases of the coronavirus in the U.S., the Coast Guard is “scrubbing the lists of crew members to understand where their last ports were, where they may have had some contact,” Adm. Karl L. Schultz said Wednesday night.

A cruise ship headed to Ensenada, Mexico, that returned to California on Wednesday and was being held off the San Francisco coast following the death of a 71-year-old passenger, is “very much of high interest,” he said.

“We've been involved, and I suspect our role is going to get increasingly larger,” Schulz said. “This is a complex problem. Hopefully we can continue to manage it proactively as a nation, but the Coast Guard is going to be very much in the thick of it.”

But he encouraged the audience at the Coast Guard Academy on Wednesday night, mainly cadets and officer candidates, to keep calm.

Schultz was asked by Meserve, who referenced the case of Coast Guard Lt. Christopher P. Hasson, whom federal prosecutors described as a “domestic terrorist,” whether the Coast Guard has thought about banning Confederate symbols from its installations as the Marine Corps did recently.

The Coast Guard's Affinity Group Council, which promotes inclusive and diverse work environments, recommended to Schultz last spring that the service prohibit the display of the Confederate flag in any iteration on all Coast Guard installations and government-owned housing.

The Coast Guard has not banned Confederate imagery, Schultz said, but changed policy last year to give commanders discretion as to how to handle such imagery “if it's revealed and it's offensive to somebody.” He said the Coast Guard is closely watching the Marine Corps' decision.

“Every situation on a Coast Guard facility that involves a Confederate flag, or any hate symbol, will be investigated. It will be immediately removed,” he said.

A female African American cadet later asked Schultz why the use of the Confederate flag would not offend somebody, knowing its history.

“If the use of such a derogatory object does not offend someone, especially here, shouldn't we be worried about their ability to effectively lead and understand people of all different backgrounds?” she asked.

She went on to say that, if the Coast Guard wants to increase diversity, why not ban such imagery?

“It's clearly seen by many as a hate symbol,” Schultz said. “What we have to figure out is where do you want to position the Coast Guard on what could be a very interesting conversation and battle of First Amendment right to constitutionality.”

He said the policy instituted last year gives commanding officers discretion, “but if it's found offensive by an individual at a Coast Guard unit, they need to investigate that.”

But diversity remains a challenge, he said, pointing to women making up 14.9% of the Coast Guard overall and African Americans making up 6% — a rate that hasn't changed “for about a decade plus.”

To increase retention, he said the Coast Guard is rolling out a diversity and inclusion action plan in March, which will include about 125 experts doing leadership development and advisory councils at the various Coast Guard commands.

The Coast Guard, he said, is in the midst of a two-year study on how to better retain underrepresented minorities, similar to a female retention study it did last year, with initial results expected this summer.

Schultz also outlined the future ships the Coast Guard plans to build and the service's information technology being on “the brink of catastrophic failure,” a point he emphasized in his State of the Coast Guard address last month.