U.S. Coast Guard icebreaker Healy suffered a fire in one of its main propulsion motors as it left Seward, Alaska, Aug. 18 for an extended deployment to the Arctic 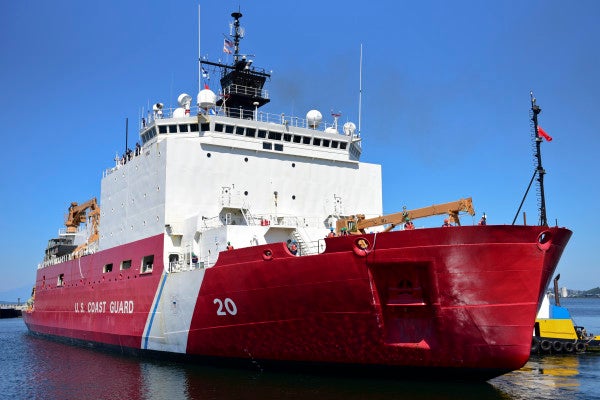 The Coast Guard Cutter Healy suffered an Aug. 18 fire off south-central Alaska that damaged a critical propulsion motor and forced the icebreaker to scuttle an Arctic mission and return to home port in Seattle.

The Healy is one of two functional icebreakers operated by the Coast Guard. The fire was reported at 9:30 p.m. as the Healy was some 60 miles off the town of Seward, where the vessel had made a port call three days earlier to pick up 11 scientists for the research cruise.

The propulsion motor damaged by the fire uses power generated by diesel engines to spin a shaft and propeller. The fire was put out less than a half-hour after it was reported, and the cause is not known, according to a Coast Guard statement.

The Healy’s Arctic cruise has been canceled, and the vessel is now slowly making its way south with only one of two shaft-propeller systems able to function. As of early Tuesday afternoon, the Healy was in the Gulf of Alaska, more than 490 miles from Seattle.

A Coast Guard spokesman, Senior Chief Petty Officer NyxoLyno Cangemi, declined to comment on why a statement disclosing the fire was not release until Tuesday, one week after the Aug. 18 accident.

The Healy’s estimated return date to Seattle is Aug. 31.

“I commend the crew of the Healy for their quick actions to safely combat the fire,” said Vice Adm. Linda Fagan, the Pacific Area commander. “This casualty, however, means that the United States is limited in ice-breaking capability until the Healy can be repaired, and it highlights the nation’s critical need for Polar Security Cutters.”

In August 2019, the Navy and Coast Guard awarded a contract to VT Halter Marine for detail design and construction of a new polar cutter, with construction expected to begin next year and delivery in 2024.

The Healy, which was commissioned in 1999, is a 420-foot medium-duty icebreaker that has performed many Arctic cruises and can continuously break ice up to 4 feet 6 inches thick.

Before the fire broke out, the Healy completed a 26-day patrol in the Bering Sea, along the U.S.-Russian Maritime Boundary Line, and in the Arctic.

The Coast Guard also has two 1970s-era Seattle-based heavy-duty icebreakers that are designed to break ice up to 6 feet.

One, the Polar Sea, has been idle since a 2010 crankcase explosion. Its sister ship, the Polar Star, underwent a $56 million renovation in 2012 to extend its operational life but has been plagued by numerous mishaps on missions that take it south to clear ice for resupply of the McMurdo Station for scientific research in Antarctica.