As fallout continues from the outbreak of COVID-19 aboard the aircraft carrier USS Theodore Roosevelt — with nearly 600 infected and one crew member dead — the Coast Guard appears to have had a close call, but that’s all, with the virus on the Honolulu-based cutter Midgett 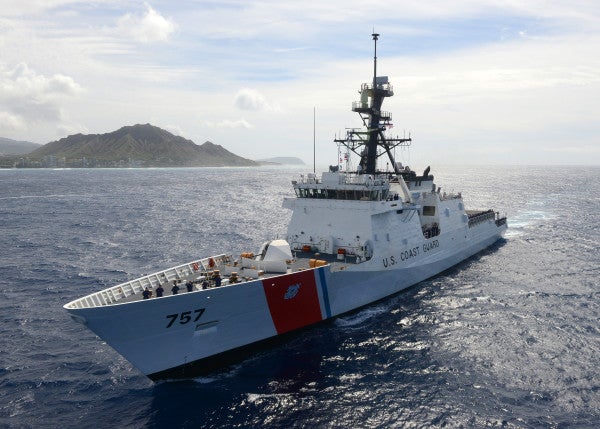 As fallout continues from the outbreak of COVID-19 aboard the aircraft carrier USS Theodore Roosevelt — with nearly 600 infected and one crew member dead — the Coast Guard appears to have had a close call, but that’s all, with the virus on the Honolulu-based cutter Midgett.

A crew member aboard the 418-foot cutter, which has a crew of about 150, went to the ship’s corpsman (a medical provider) on March 24 “with symptoms of mild headache and congestion” shortly before the ship left port on a patrol the same day, the Coast Guard said.

The crew member was kept ashore due to an unrelated health issue — but serious concerns over COVID-19 on the ship, then at sea, arose when he tested positive April 1.

Thirteen potential close contacts were identified. The ship returned to Honolulu on April 2.

Three of the infected crew member’s roommates were quarantined. Seven crew members were tested. Plans were formulated to use the base gym as a quarantine center.

The individual has since recovered, and no other positive cases were discovered, the Coast Guard said.

“The commanding officer of Midgett and the Coast Guard took early and responsible measures to manage risk and care for the crew by acting rapidly and decisively once a COVID case was suspected,” Chief Sara Muir, deputy public affairs officer for the Coast Guard’s District 14, said in an email. “This action was taken in coordination with local health officials, public health doctors and military medical specialists, and Honolulu port authorities. We took care of our people and swiftly restored the cutter’s readiness to conduct essential operations to protect the nation.”

Some questioned whether command did in fact respond decisively to early indications of a sick crew member. But Muir said there was no awareness of COVID-19 symptoms prior to March 24 when the ship went to sea.

Between April 2 and Wednesday, Midgett’s crew was under “restriction-of-movement” orders that kept them on Coast Guard Base Honolulu “to protect the crew’s health and wellness and the unit’s mission readiness” while the unit assessed the health situation, Muir said.

The Midgett’s mission, which resumed Wednesday, was previously described as a regional patrol in Hawaii and Oceania.

The events on the Midgett highlight the sea services’ inherent conflict in maintaining ready, deployable forces, which requires close contact on ships, and battling COVID-19, which calls for avoiding that close contact.

“It’s not a good idea to think that the Teddy Roose­velt is a one-of-a-kind issue,” Gen. John Hyten, vice chairman of the Joint Chiefs of Staff, said last week.

The Roosevelt is sidelined on Guam with nearly 600 positive coronavirus cases. The death of a crew member was reported Monday. More than 4,000 sailors were moved to shore.

China, meanwhile, has sought to take advantage of the U.S. military’s COVID-19 situation in the Pacific.

The U.S. military “has been faced with the dilemma of simultaneously strengthening prevention and control of the epidemic while being ordered to intensify military competition with China and Russia,” Global Times, a voice for the Communist Party of China, said in an opinion piece Monday.

U.S. Navy activities in the East and South China seas have dropped, but aerial reconnaissance missions continue, the publication said. With increased national strength, China “will naturally expand the range and intensity of its activity.”

“With its preoccupation of the ‘China threat’ theory, the U.S. is failing to recognize that the coronavirus pandemic is its main adversary, not China,” Global Times said.