Lieutenant John Briggs, known as JJ to his friends and family, received the Distinguished Flying Cross for acts of heroism after Cat. 4 Hurricane Harvey battered the Louisiana and Texas Gulf Coast regions in late August 2017 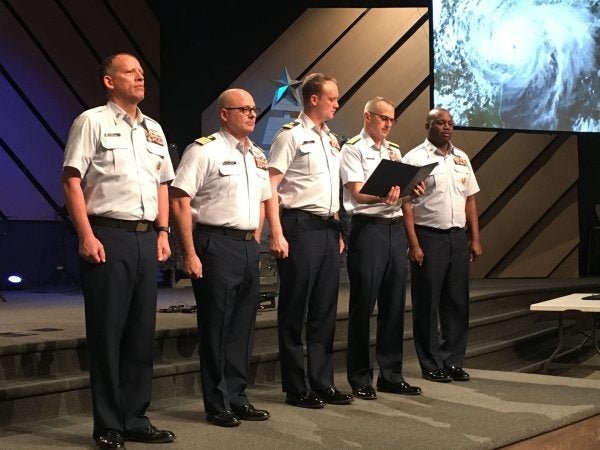 A Mobile, Alabama-based U.S. Coast Guard helicopter pilot was awarded one of the country's highest military honors during a ceremony in New Orleans Friday.

Lieutenant John Briggs, known as JJ to his friends and family, received the Distinguished Flying Cross for acts of heroism after Cat. 4 Hurricane Harvey battered the Louisiana and Texas Gulf Coast regions in late August 2017.

Hurricane Harvey caused $125 billion worth of damage and is the wettest U.S. hurricane on record, dropping more than 60 inches of rain in some parts of Texas. The subsequent flooding destroyed hundreds of thousands of homes, displaced 30,000 people and forced more than 17,000 rescues, according to reports at the time.

Among the rescue of 120 people between Aug. 25 and Sept. 1, Lt. Briggs rescued a critically ill pregnant woman who had become trapped by rising waters in her Houston attic, according to his official Coast Guard citation.

At 2:30 a.m., Lt. Briggs and crew launched their MH-65D helicopter into violent and deadly weather conditions, with winds gusting at nearly 100 mph, torrential rain and visibility below 50 feet. Once on the scene, a rescue swimmer was lowered between high-voltage power lines and 100-foot trees to reach the home where the sick woman was trapped.

But rather than just one woman, it was discovered numerous other family members needed rescuing. The rescue was made more difficult by aircraft complications.

“Due to the massive amounts of water intrusion, the crew endured multiple aircraft emergencies during the rescue of additional family members found in the attic,” read the citation. “The combination of losing critical avionics, communication failures, the loss of aircraft stabilization systems and the violent motion of the aircraft due to unprecedented 80KT winds made maintaining a hover an aeronautical feat.”

But the dramatic rescue didn't end there. A failure with one of the hoists meant a rescue swimmer had to be left behind. As the only rescue crew available during the early parts of the overall Hurricane Harvey response, Lt. Briggs returned later with a new aircraft to complete the rescue.

While limited in maneuverability by power lines and being below the tree line, the crew made a daring rescue of an infant that had been swept away by fast moving water. The child was grabbed by hand with the aircraft hovering just above the water.

Despite the inclement weather causing problems for the aircraft, the helicopter loaded a record 14 individuals and four crew members before leaving the area. Of the 14 civilians rescued, 10 were babies.

The Distinguished Flying Cross is awarded for heroism or extraordinary achievement while participating in aerial flight, in a manner that is distinctive and not routine, according to the Coast Guard. Such is the importance of the medal, only an act of Congress can authorize it.

Since first being established in July 1926, the revered medal has been awarded to people such as Buzz Aldrin, Jim Lovell of Apollo 13, Senator John McCain, President George H.W. Bush for bravery during World War II, Charles Lindbergh, Amelia Earhart, Chuck Yeager, and Clark Gable, no less.

Lt. Briggs, 39, is married, has two excitable dogs and can be seen on his days off cruising around Midtown Mobile in his golf cart listening to questionable music, according to his wife.