Coast Guard Lt. Ronaqua Russell was one of eight Coast Guard pilots to be awarded the prestigious Coast Guard Air Medal for operations in the wake of Hurricane Harvey 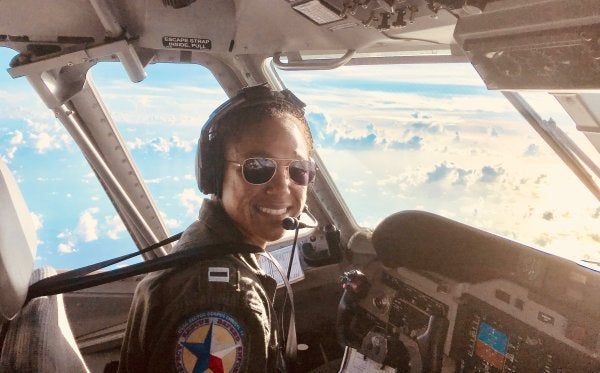 When Hurricane Harvey slammed into southeast Texas with Category 4 intensity in late August 2017, causing devastating flooding and damage, many in the Houston metropolitan area struggled to find a way out of town. But with airports closed and flights grounded, Coast Guard Lt. Ronaqua Russell and her counterparts out of Coast Guard Sector/Air Station Corpus Christi were on the way in.

Russell, 28, was one of eight Coast Guard pilots to be awarded the prestigious Coast Guard Air Medal for operations in the wake of the deadly hurricane. And the award, presented Feb. 21 in Tuskegee, Alabama, made history: she is the first African-American woman in the service to ever receive the Air Medal. But despite what she calls the “surreal experience” of receiving the award, her focus is still on the mission ahead and her love of the job.

An HC-144Ocean Sentry aircraft pilot, Russell had already been at work in the days before the storm made landfall Aug. 25, flying along the beachline south of Galveston down to Brownsville with Cmdr. Steve Pittman, the aircraft commander, and linking up with maritime search-and-rescue. The team would be back in the air just hours after the storm hit, conducting damage assessments and transporting people and gear in conditions too rough for most.

“We were tasked with doing damage assessment from the Brownsville area up to Port O'Connor, Russell told Military.com, describing a coastal port about midway between Corpus Christi and Galveston. “But when we got to Port O'Connor, the hurricane was still there … it was so bad we ended up turning back.”

The weather would not stop them, however, from making a first landing in Houston amid stormy conditions, on a partially flooded runway.

“That approach and landing into Houston was the worst weather that I'd seen up to that point,” Russell said. “The visibility was low; it was raining really hard.”

But though the circumstances were frightening, the pilots knew it was up to them to complete the logistics and transport mission: nobody else was flying in and out of Houston. The Coast Guard was in the air alone.

It would be a multi-day marathon for Russell and the other pilots, who weren't sure when backup and rest would arrive. They ended up flying for nearly five days before new pilots, recalled to assist with the hurricane, arrived.

But for Russell, the challenges that came with the hurricane did not end there. Shifted from her flying role to a position at the Harvey incident command post as air coordinator, her attention was pulled to another hurricane making landfall 2,000 miles away in the Virgin Islands. Russell grew up in the Virgin Islands; her mother and grandmother still lived there.

“During that time, that was when [Hurricane Irma] hit and I didn't hear from my mom for a bit,” Russell said. ” … I was really stressed out; everybody knew that they just got hit by a Category 5.”

Her first instinct was to make her way to the Virgin Islands to find her family members, but members of her chain of command convinced her it wasn't wise. Ultimately, she was able to help negotiate travel for them from St. Thomas to Puerto Rico via boat, and ultimately to the states. While her mother soon returned home, her grandmother, Annette Chinnery, decided to stay with Russell, even moving with her eventually to her next duty station in Miami.

Still on the job, Russell would ultimately be sent to support storm relief in the wake of yet another hurricane, Maria, which cut an ugly swath across Puerto Rico in September 2017.

Following the storms, life would move on and Russell would leave Corpus Christi and transfer to Air Station Miami. But late last year, she was notified that she would receive the Air Medal for her actions in response to Harvey.

The medal is awarded for acts of heroism or meritorious achievement during flight.

Russell said she was excited to learn of the award, but didn't realize she had made history by earning it.

“My supervisor … he was sitting next to me, and he said, 'Ronny, do you realize you're going to be the first black woman to get this?' It was actually because of him, he was the first one to bring it to my attention. Then it blew up.”

At a ceremony at Tuskegee, famous for being the training ground for a group of African-American pilots who performed heroically in World War II, Russell received her medal from Adm. Charles Ray, vice commandant of the Coast Guard.

The occasion also gave her the opportunity to meet for the first time face-to-face with the four other black female pilots in the Coast Guard, who she said she had long considered mentors. Following the medal ceremony, the “Fab Five” posed together for a remarkable group photo.

Russell, who knew she wanted to fly since before she enrolled at the U.S. Coast Guard Academy in 2008, said she doesn't spend much time thinking about being one of only a handful of female African-American pilots to ever fly in the service. But she said she appreciates the significance of the historic first.

“I'm getting this award, but I'm mindful of the fact there were so many people involved to make this happen,” she said. “It's surreal and it's very very humbling.”

As for the future, she said she continues to love what she does.

SEE ALSO: How The US Military Responds To A Hurricane, In Photos

WATCH NEXT: The Coast Guard Responds To Hurricane Harvey