"I told the crew we were trading our penguins for polar bears and the northern lights." 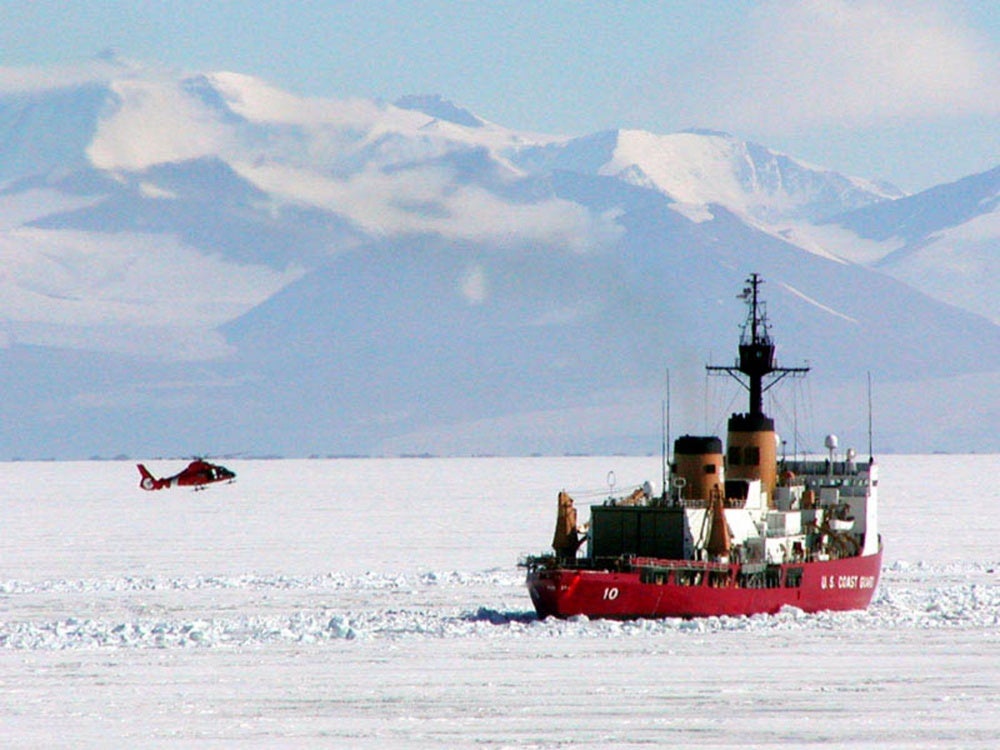 Nov. 30—The global pandemic has resulted in a dramatic reshuffling of the annual cruise of the Coast Guard icebreaker Polar Star. Instead of heading south into the unending light of the Antarctic summer, the Seattle-based vessel will journey north into the winter darkness of the Arctic.

As late as August, the 134 full-time crew were still preparing for their traditional role assisting in the resupply of the McMurdo Station on Ross Island, close to the Antarctic continent.

That mission was scuttled by the National Science Foundation as the coronavirus pandemic prompted research to be cut back and restrictions put in place to reduce the risk of the virus reaching there. So, in September, the Coast Guard decided to send the Polar Star on the first U.S. icebreaker winter cruise into Arctic waters since 1982.

“This is going to be an amazing adventure,” said Capt. William Woityra, the 44-year-old commanding officer of the 399-foot Polar Star. “When I first found about this I told the crew, we were trading our penguins for polar bears and … for the northern lights. The crew is really excited about the chance to go do something different.”

For this year’s northbound cruise, the Polar Star will start with a few days of cruising in Puget Sound to make sure that crew quarantines have been effective and there are no “sleeper cases” of COVID-19 aboard the vessel, according to Woityra.

Then, the Polar Star will head for the Gulf of Alaska, cross into the Bering Sea and journey through the Bering Strait into the Chukchi Sea. Depending on ice conditions, the vessel then could push farther north before making its way back south to Seattle sometime in early March.

The Polar Star will travel within the 200-mile economic zone claimed by the United States off Alaska. This is an area that abuts a maritime zone of Russia, which has had a muscular presence in northern waters. In August, a Russian military exercise extended into a U.S. zone of the Bering Sea, where American fishing captains were startled and angered to hear Russians warning them to leave the area. And Woityra, during an online November Wilson Center forum, said one purpose of the cruise was to “wave the flag,” and “ensure that we’re projecting sovereign presence and power.”

Coast Guard icebreakers have stayed out of the winter Arctic for nearly four decades because it only has two Seattle-based vessels.

The Healy, commissioned in 1999, is a “medium” icebreaker that breaks ice up to 10 feet thick and typically ventures into the Arctic in the summer and fall.

The Polar Star, commissioned in 1976, is classed as heavy — able to break through ice up to 21 feet. That has made it a valued asset helping to carve open channels so that vessels can deliver supplies to McMurdo Station.

The two U.S. icebreakers both have had mishaps and maintenance problems. The Healy suffered a fire Aug. 18 that damaged a critical propulsion motor and forced the cancellation of an Arctic mission. The crew of the aging Polar Star has faced many challenges, including a 2019 trip to McMurdo Station when they had to put out a fire that damaged an incinerator and repair a leaking shaft, with the aid of a scuba diver. That repair forced a temporary halt to breaking ice.

Related: A fire has hobbled one of the Coast Guard’s only functioning icebreakers

Russia has long had a much bigger ice-breaking fleet than the United States because so much of that nation borders Arctic waters; it is now on track to exceed 50 vessels. Alaska and Washington’s congressional delegations have pushed for years for the United States to reinvest, and in 2024 the first of a new class of three heavy icebreakers is scheduled to be delivered to the Coast Guard. If congressional funding is sustained, that will be followed by the construction of three new medium icebreakers.

Woityra said he has a young crew, mostly under the age of 30, and he expects them to provide some of the expertise and leadership for the new generation of U.S. vessels that will be able to make more frequent trips to the winter Arctic. And, he views this upcoming cruise as a great opportunity for training.

“They are showing incredible resilience and agility to shift focus,” Woityra said. “We are able to turn on a dime and say, OK, this is a change but it’s an opportunity.”

Woityra says the Polar Star crew is accustomed to Antarctic ice, which may be up to 10 feet thick.,Because it is frozen to the shoreline, the ice is typically very flat.

The Arctic ice is very different. It’s often broken up and tossed by winds, and it smashes together to create ridges as it piles on top of itself. Then, if it survives the summer, the salt may leach out and the ice becomes harder and denser. Woityra says can be “really challenging” to get through.

It is uncertain just what conditions the Polar Star will encounter. The changing Arctic is deeply affected by climate change, which has dramatically reduced the amount of multiyear ice. This year, a Siberian heat wave got a portion of the Arctic sea ice melt off to an early start, and the ice reached its minimum extent Sept. 15 — the second lowest since record-keeping began in the 1970s, according to NASA.

While north of the Arctic Circle, the Polar Star will take a series of measurements of ice thickness and concentration. Polar Star researchers will conduct communication and other technology tests, including deploying unmanned aerial vehicles in the darkness of the winter Arctic. They also will test a remote operating vehicle in the frigid ocean conditions.

The Polar Star’s route will take the vessel through the Bering Sea during the winter fishery when pollock, cod and other seafood is caught by a largely Washington-based fleet of vessels.

Woityra said the Polar Star is designed for breaking ice and pitches a lot in rough water, for which the Bering Sea is notorious during the winter. So the plan is to head directly to the Arctic and not linger in the Bering Sea, where U.S. Coast Guard cutters typically conduct winter patrols. Still, the presence of the icebreaker in these northern waters also will be welcome by the U.S. captains who were rattled by the August encounter with the Russian vessels and aircraft engaged in the military exercise.

“It definitely makes a difference to have a Coast Guard presence up there whether it be an icebreaker or cutter,” said Capt. David Anderson, skipper of the Seattle-based Blue North freezer longliner. “Just to have them out there for safety is number one in my book but also there is this whole Russia incident, which is something that has never happened before.”

In August, Anderson was told by the crew of a Russian plane to leave the area he was fishing, and — after consulting with the Coast Guard — he dropped his gear and moved about 10 miles away, before coming back to resume his fishing.

Other captains also reported being harassed by the Russians during the August military exercise.

Then on Sept. 14, in a separate Bering Sea incident, a Russian warplane made two direct passes over a U.S. catcher processor vessel at heights estimated to be about 500 feet, then flew over another fishing vessel.

“We are concerned that the confrontations by the Russian military with our vessels this summer are part of a broader trend,” said Stephanie Madsen, executive director of the At-Sea Processors Association. Madsen said that a robust U.S. presence in the region is “simply nonnegotiable.”

Polar Star will be in service until at least 2029

The upcoming Arctic deployment comes as the Polar Star nears the end of its 44th year of service, which is way past its initial 30-year expectation of service.

Woityra said that there has been considerable investment in maintenance and that he feels confident the ship is ready for the upcoming trip.

And it won’t be retiring anytime soon. During the next five years, $75 million has been allocated to keep the Polar Star running at least until 2029.

‘We want to make sure that the Polar Star is available to meet mission demands whenever we’re needed,” Woityra said.

Related: Military activity is picking up in the quiet waters between the US and Russia