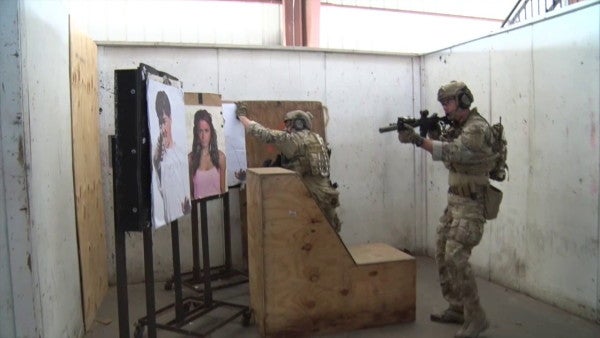 OFF THE COAST OF NORFOLK, Virginia — The scenario: Neo-Nazi terrorists with a cache of radioactive material have taken over a three-deck tour boat out of Miami full of frightened tourists.

The rescue team: an elite cadre of Coast Guard operators with specialized training in ship boarding. Their uniforms were non-standard — some even wore high-top sneakers — but they sported arm patches bearing a common motto: “Nox Noctis est Nostri,” The Night Is Ours.

These are the Coast Guard's little-known Maritime Security Response Teams, the closest the Department of Homeland Security-owned service gets to military special operations. Their profile in special ops-style ship boardings and close combat has loomed larger as the service as a whole takes on more strategic roles in national security despite budget constraints. In fact, Coast Guard MSRTs, as they're called, are now deployed to the Middle East, playing an increasingly significant role in drug-interdiction and anti-piracy operations around the Persian Gulf.

On a recent evening here, Military.com observed how MSRTs train, in elaborate, realistic scenarios, for this specialized work.

Aboard the notionally hijacked tour boat were scattered role-playing “terrorists” with automatic weapons and gas masks, and role-player tourists. The mission of the MSRT Advanced Interdiction Team was to subdue the terrorists, free the tourists and secure the radioactive material, while using minimum force.

The teams were guarded about their tactics, but what can be said is that, from the first deck of the darkened target ship, the approach in small boats could not be heard.

The Coast Guardsmen clambered aboard in silence and crept through the ship using night-vision devices and hand signals.

For swift but controlled movement through a target ship, they rely on knowledge gained through training and intelligence of a ship's likely layout.

The team members moved deliberately through the target ship, efficiently neutralizing the simulated threat and regaining control in a tight 45 minutes. At one point, blanks were fired to dispatch at least one “terrorist.” Others were taken into custody and handcuffed. The role-playing tourists were freed without casualties. The radioactive material, discovered in a metal box, was turned over to the FBI and Department of Energy.

All in a night's work for a group that enjoys little name recognition despite its advanced skills and high-end training.

“There are people who have been in the service don't know who we are,” Master Chief Petty Officer Ryan Patterson, an emergency medical technician and 10-year veteran of the teams, told Military.com.

They maintain that their lengthy and rigorous training is on par with other special operations elements, and in the process they have developed comparable skills.

They have weapons skills in spades. For the last three years, Coast Guard “precision marksmen” have finished respectably in the annual Army International Sniper Competition at Fort Benning, Georgia. Last year, the Coast Guard team finished 9th overall among some 30 teams, just ahead of the Marines from the Scout Sniper Instruction School at Quantico, Virginia. It was the second year in a row that a Coast Guard team finished ahead of the Marine snipers in the competition.

All of which is not to say that the Coast Guard's teams are necessarily the equivalent of Navy SEALs, Marine Raiders or other groups in U.S. Special Operations Command.

But the security response teams, and the Advanced Interdiction Teams, have found a niche in the spectrum of special operations at which they excel: boarding ships, whether by fast-roping from helicopters or the old-fashioned way, using grappling hooks and climbing hand-over-hand up the side.

The teams also have presidential missions. They are on Manhattan's East River when President Donald Trump visits the United Nations, and they patrol when he is at his Mar-a-Lago estate in Florida.

“We have a very specific job to do, and we do our thing here in the continental U.S., as well as over in [U.S. Central Command],” Evans said. “I would say that we're unique in the sense my guys are not worried about scuba diving, they're not worried about jumping out of airplanes. All that we worry about is boarding and close-quarters combat.”

In Bahrain, where the MSRTs maintain a presence, they train on what's called a “ship in a box,” a warehouse fitted out with ladder wells and hatches that can be configured to simulate most shipboard spaces.

The warehouse also has a replica of a 65-foot fishing dhow, much like the ones they would encounter in the Persian Gulf, with hidden compartments they are expected to find in training to search for contraband.

For security reasons, Coast Guard officials would not discuss statistics on the number of ship boardings, seizures or engagements with what are euphemistically call “non-compliant crews” carried out by the teams that Vice Adm. Scott A. Buschman, commander of Coast Guard Atlantic Area, called “deployable specialized forces on alert 24/7.”

In a statement, Buschman said the teams are “capable of handling the full spectrum of maritime interdiction operations, specializing in counter-terrorism,” and are ready to deploy with Defense Department and partner agencies worldwide.

As always with the Coast Guard, a pivotal issue for the response teams, which are split between the East and West Coasts, has been getting funding and support.

Shelton, of MSRT West, told Military.com in early March, “We had some issues getting the right training and support at the higher levels, but I feel like we are supported now.

“We are deploying across the U.S., out on ships and even deploy a few members outside the team — our observation folks,” he added. “We go anywhere where there is the potential for a low-probability, high-casualty event against the homeland.”

Teaming with the Navy

For the teams, the main focus of operations is the Middle East and anti-pirate, anti-smuggling missions off the six 110-foot Coast Guard patrol boats stationed in Bahrain, the largest Coast Guard contingent outside the U.S., as part of the Navy's Task Force 55.

In the task force, which comes under the Navy's Patrol Forces Southwest and the 5th Fleet operating out of Bahrain, the MSRTs have joined missions with Navy SEALs and other elements of Special Operations Command.

The teams have also been in extended deployments aboard Navy warships, including the cruiser Lake Champlain and the destroyer Stockdale, a recognition of the value their specialty brings to maritime missions.

In interviews in late March at their East Coast training base in Moyock, North Carolina, Patterson, 37, of Massena, New York, and Evans, 31, of Buffalo, New York, said the MSRTs grew out of the Deployable Operations Groups, or DOG Teams, that were formed after 9/11 by then-Coast Guard Commandant Adm. Thad Allen.

The DOG teams were later decommissioned and split up into what are now the West Coast and East Coast sections of the MSRTs.

“We try to emphasize we're filling a gap there, which is that short-notice maritime response capability,” Evans said.

The Coast Guard literature states that the response teams are intended to provide “rapidly deployable specialized forces to execute mission objectives in support of tactical and operational commanders.”

The AITs include boat handlers and navigators, precision marksmen, hook and climb masters, fast-rope specialists, and breachers — all trained for assault whether by helicopter or small boat.

Boatswain's Mate 1st Class Marco Panaganiba, 35, of San Diego, said his job is to deliver boarding teams “unannounced and undetected” from a small boat capable of 40-plus knots, but he'd prefer a new craft with more range for missions farther offshore.

“It took a few years to get here” with the MSRTs, following the selection and training process, said Maritime Enforcement Specialist 2nd class Dean Alati, 31, of Lapeer, Michigan. In his estimation, the teams are the “subject matter experts” when it comes to boarding ships.

A renewed emphasis on the MSRTs' role is part of a push by Coast Guard Commandant Adm. Karl Schultz to take on more strategic missions in support of the Defense Department and other agencies, despite chronic shortfalls in funding for the service as part of the Department of Homeland Security.

At a Center for Strategic and International Studies event last summer, Schultz said the demand for Coast Guard services from DoD combatant commanders around the globe has never been higher, and he made a prediction that came true in the last week of March.

“We're in discussion with [Navy] Adm. [Phil] Davidson,” commander of U.S. Indo-Pacific Command, Schultz said. “There's a request for forces, and I think you will see some Coast Guard presence in that part of the world.”

On March 24, the Coast Guard cutter Bertholf joined the Arleigh Burke-classguided missile destroyer Curtis Wilbur in a Freedom of Navigation Operation, or FONOP, through the Taiwan Strait despite warnings from China.

In testimony last week on the Coast Guard's proposed fiscal 2020 budget before the Senate Appropriations Subcommittee on Homeland Security, Schultz described the broadening scope of operations for the 42,000 active-duty Coast Guard personnel, 6,000 reservists and 8,500 civilians, and the strain to improve readiness under funding restraints.

“The Coast Guard is a federal law enforcement agency, a regulatory body, a first responder, a member of the U.S. intelligence community, and a military service and a branch of the armed forces of the United States at all times,” he said. “We currently have forces assigned to each of the six geographic combatant commanders.”

Yet next year's Coast Guard budget request includes a $1 billion reduction in discretionary funding, from $10.3 billion in fiscal 2019 to $9.3 billion for fiscal 2020.

Schultz warned of the “erosion of readiness experienced in our service over the past decade due to near flat-line funding for operations and support.”

“We must address our lost purchasing power, the growing backlogs of deferred maintenance on our capital assets, and the degraded habitability of our infrastructure,” he said. “We've got a $1.7 billion infrastructure backlog.”

The need for more assets is particularly acute in the area of drug interdiction, Schultz said. In fiscal 2018, the Coast Guard seized 209 metric tons of cocaine and detained more than 600 suspected smugglers — more than all other federal agencies combined, he said.

Schultz agreed with Sen. Jon Tester, D-Montana, the ranking member of the subcommittee, that the Coast Guard had intelligence from U.S. Southern Command on about 80 percent of the drug runners, but could only interdict about 20 percent for lack of resources.

“I think it is our desire to close that gap,” Tester said.

SEE ALSO: This Coast Guard Pilot Braved A Hurricane — And Made History In The Process