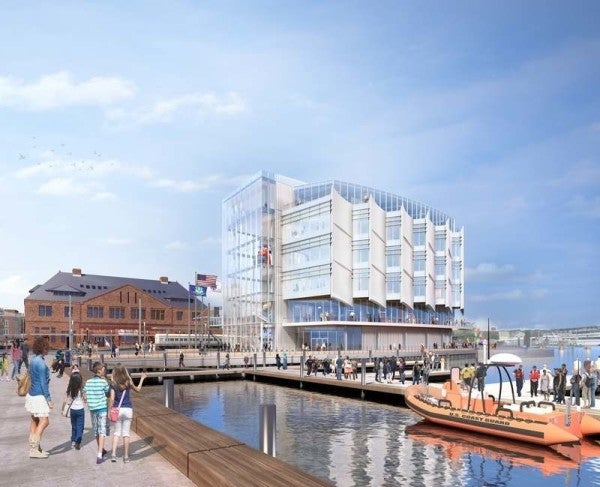 The National Coast Guard Museum Association has raised more than $56 million for a national museum on the downtown New London waterfront to tell the story of the Coast Guard and has plans to launch a new committee in the spring to help raise remaining funds.

At the same time, construction of the museum, which was supposed to start in earnest early this year, has been pushed back due to two other big projects going on in the area.

The project, which has been years in the making, got a boost in late December when President Donald Trump signed a massive spending package that included another $5 million in federal funding for the museum.

To date, federal contributions total $15 million out of an anticipated $30 million, private donations have topped $21 million and the state has bonded $20 million for the project. Museum officials are not publicly releasing an updated cost until a bid is issued for the construction work, but it will cost at least $100 million to build, museum association spokesman Drew Forster said.

Forster said the museum association reached another milestone late last year with a series of meetings, known as a plan of action and milestones, with Coast Guard officials in Washington to go step by step through the project, including details such as how many Coast Guard staff would be needed to run the museum. The Coast Guard, following a nationwide search, selected Elizabeth Varner, who worked as a staff curator for the Department of the Interior, to be the museum director. She accepted the position in August.

“Surpassing the $56M mark in fundraising is significant for the project, but far more significant is the three-day Plan of Actions and Milestones meeting in December at Coast Guard Headquarters that Vice Commandant Admiral Charles Ray kicked off along with our board Chair, Susan Curtin. We reviewed the full scope of the project from exhibits to construction to legal review, every aspect. Everyone involved feels the momentum we are carrying into 2020,” retired Coast Guard Capt. Wes Pulver, president of the museum association, said in a statement.

But construction is not moving forward yet. Despite an announcement in August from Curtin, the board chair, that the project was ready to enter the next phase of construction, and a bid would soon be released for the initial site preparation work, museum officials decided to push back the release of the bid given local contractors are engaged with big projects ongoing at Lawrence + Memorial Hospital and Electric Boat.

Given that, Forster said the museum association “missed the window” to do the early construction work, which will take about six to eight months. The intent is to do the site prep in the off season to avoid disruption to the New London waterfront during the summer. The bid for the work is now expected to be released in fall 2020.

Construction of the museum is expected to take four years, so the earliest the museum would open would be 2024.

This spring, the museum association expects to establish a capital campaign committee headed by Gordy Bunch, a Texas businessman who is CEO of one of the largest independent insurance providers in the nation and a former petty officer in the Coast Guard, to help raise money for the museum. The committee members, who are still being finalized and will work on a volunteer basis, will help the museum association identify and connect with prospective donors as well as corporations who may be interested in contributing to the project.

Meanwhile, the museum association is working to satisfy requirements as part of a supplemental environmental assessment to evaluate any potential environmental impacts related to building the museum. The Coast Guard has not issued a determination on the assessment. The service will determine whether there is a finding of no significant impact, meaning the project can proceed, or whether there are outstanding issues that need to be addressed.

The final design of the museum, approved by the museum association's board last year, shows an 80,000-square-foot, five-story, partially glass building. The barque Eagle, a training vessel for cadets at the Coast Guard Academy and those going through the Officer Candidate School, is expected to be a main feature of the interactive museum.