Coast Guard Members Are Going Without Pay Due To The Shutdown. Here’s How The Communities They Serve Are Keeping Them Afloat

Twenty-four days into the longest government shutdown in U.S. history, the strain is being felt acutely by the U.S. Coast Guard, as some 42,000 active-duty members are preparing to miss their first paycheck on January 15 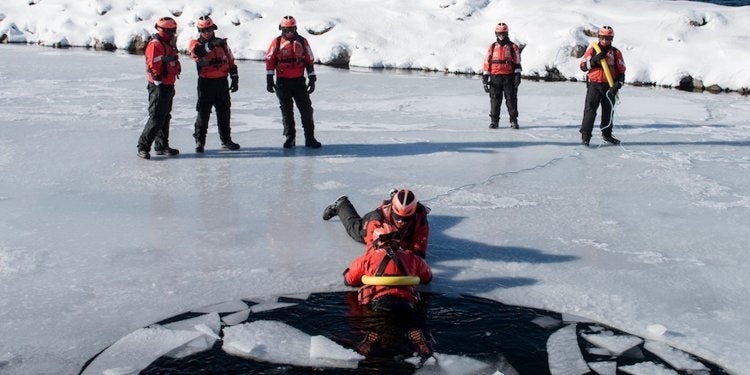 Twenty-four days into the longest government shutdown in U.S. history, the strain is being felt acutely by the U.S. Coast Guard, as some 42,000 active-duty members are preparing to miss their first paycheck on January 15.

In a January 10 letter, Vice Commandant Adm. Charles Ray said that without an appropriation or funding measure, “the Coast Guard will not be able to meet the next payroll,” an extreme disruption that officials averted in late December by moving funds around.

“Let me assure you your leadership continues to do everything possible, both internal and external to the Service, to ensure we can process your pay as soon as we receive an appropriation,” Ray added. “However, I do not know when that will occur.”

The Army, Navy, Air Force, and Marine Corps are funded through the Defense Department, which got it its fiscal year 2019 budget in the fall, and none of their troops are missing a paycheck.

But the Coast Guard, while technically a military branch, is funded through the Homeland Security Department, funding for which has been held up amid a dispute between President Donald Trump and Congress over $5.7 billion Trump wants to start construction of a wall on the US-Mexico border.

A work-around secured funding for Coast Guard payroll on December 31, paying the service's active-duty members and reservists who drilled before funding lapsed, but service leaders have said it cannot be repeated. Civilian employees are unpaid since December 21.

Active-duty members deemed essential have continued working, as have about 1,300 civilian workers. Most of the service's 8,500 civilian employees have been furloughed, and pay and benefits for some 50,000 retired members and employees could be affected.

The service continues to operate, however.

In the Coast Guard's 14th district, which covers 12.2 million square miles of the Pacific Ocean, 835 active-duty personnel and some civilians are still working from bases in Hawaii and Guam and detachments in Japan and Singapore, carrying out “essential operations” such as search-and-rescue and law enforcement, 14th district spokeswoman Chief Sara Muir told Stars and Stripes.

Between December 21 and January 7, the district handled 46 cases, including two major ones, Muir said. On January 13, Coast Guard personnel medevaced a crew member off a fishing vessel 80 miles north of Kauai.

Read more: The US military is warning that China's fishing boats are bullies and could start a war on the high seas

Other operations, like recreational-vessel safety checks and issuing or renewing licenses and other administrative work, has been curtailed. The service has said vendors who provide fuel and other services also won't be paid until funding resumes.

As the shutdown drags on, communities around the country have mustered to support Coast Guard members and families, particularly junior members, many of whom lack savings.

On January 12, dozens of northern Michigan residents gathered for a silent auction and donation event, with funds raised going toward expenses like rent, medical bills, and heating for service members and their families.

“Whenever you cannot predict when you're gonna get your next paycheck, but you know exactly when the bills are due, it causes a lot of stress,” Kenneth Arbogast, a retired Coast Guard chief petty officer, told UpNorthLive.com. “And for younger members, young families, that's really a challenge.”

Read more: The Coast Guard turned down a request for an Arctic exercise out of concern the US's only heavy icebreaker would break down and Russia would have to rescue it

On January 13, more than 600 service members, including 168 families, gathered in Alameda, California, for a giveaway organized by the East Bay Coast Guard Spouses Club, providing them with everything from fresh fruit to diapers.

“It's worrisome. I have to put food in my family's belly,” said Coast Guard mechanic Kyle Turcott, who is working without pay. “Ain't no telling, we may not get paid until the first of next month,” added Nathan Knight, another service member.

The organizers said they were working on another food drive and could host another distribution event this week.

On January 14, Thomas Edison State University in New Jersey announced that Coast Guard students affected by the shutdown would be able to defer payments until tuition assistance was available again. The school has 135 active-duty students — 27 of whom are registered for February.

In Rhode Island, Roger Williams University said that on January 15 it would offer free dining-hall meals to active-duty Coast Guard members and their families from Rhode Island and southeastern Massachusetts.

Navy Federal Credit Union, which serves military members, veterans, and civilian Defense Department employees, has said it would offer no-interest loans up to $6,000 to workers affected by the shutdown, with repayment automatically deducted from paychecks once direct-deposit resumes.

In his January 10 letter, Ray also said that the Coast Guard Mutual Assistance Board had increased the interest-free loans it was offering, focusing on junior members, allowing those with dependents to get up to $1,000.

Erin Picou, whose husband is a chief petty officer with 17 years experience, said her family could cover the most important bills, but the mortgage for their house, on which they spent their savings six months ago, is less certain.

“It's pretty scary. I don't want the bank to take my new house,” Picou told The San Antonio Express-News.

“I can't speak for them, but I myself think my husband has worked his ass off. He needs to get a paycheck,” Picou added. “It's hard to focus on search and rescue if you don't know whether your kids and family are going to have a roof over their head and food on the table.”

Measures have been introduced to Congress to ensure pay for Coast Guard members. However, Ray said, “I cannot predict what course that legislation may take.”

In a Facebook post on Sunday, Coast Guard commandant Adm. Karl Schultz told service members the branch was continuing “228 years of military service around the globe,” including preparations for yearly ice-clearing in Antarctica, maritime-security operations in the Middle East, and drug interdictions in Central and South America.

“While our Coast Guard workforce is deployed, there are loved ones at home reviewing family finances, researching how to get support, and weighing childcare options — they are holding down the fort,” Schultz wrote.

“Please know that we are doing everything we can to support and advocate for you while your loved one stands the watch,” he added. “You have not, and will not, be forgotten.”