Countries are jockeying for position as the changing climate makes the Arctic more amenable to shipping and natural-resource extraction. Conditions... 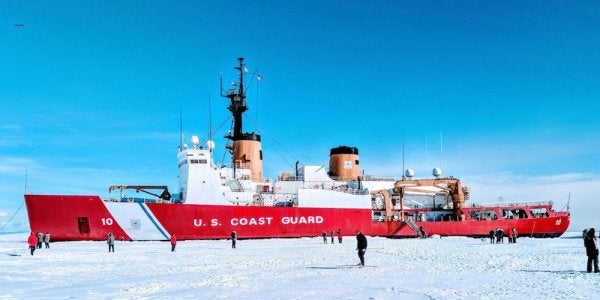 Countries are jockeying for position as the changing climate makes the Arctic more amenable to shipping and natural-resource extraction.

Conditions in the high north are still formidable, requiring specialized ships. That's felt acutely in the U.S., mainly because of the paucity of ice-breaking capability compared to other Arctic countries — particularly Russia.

Moscow, which has the world's largest Arctic coastline, has dozens of icebreakers, some of which are heavy models for polar duty and others that are designed to operate elsewhere, like the Baltic.

The U.S. has just two, only one of which is a heavy icebreaker that can operate in the Arctic and Antarctica.

That heavy icebreaker, the Polar Star, is more than 40 years old and clinging to service life — something former Coast Guard commandant Paul Zukunft was well aware of when he was asked to send the Polar Star north.

“When I was the commandant, the National Security Council approached me and said, 'Hey, we ought to sent the Polar Star through the Northern Sea Route and do a freedom of navigation exercise,'” Zukunft, who retired as an admiral in 2018, said this month at a Wilson Center event focused on the Arctic.

“I said, 'Au contraire, it's a 40-year-old ship. We're cannibalizing parts off its sister ship just to keep this thing running, and I can't guarantee you that it won't have an catastrophic engineering casualty as it's doing a freedom of navigation exercise, and now I've got to call on Russia to pull me out of harm's way. So this is not the time to do it,'” Zukunft said.

The Polar Star was commissioned in 1976 and refurbished in 2012 to extend its service life. It's the Coast Guard's only operational heavy icebreaker, and it can chop through ice up to 21 feet thick. (The Healy, the service's other icebreaker, is a medium icebreaker that is newer and bigger but has less ice-breaking capability.)

The Coast Guard's other heavy icebreaker and the Polar Star's sister ship, the Polar Sea, was commissioned the same year but left service in 2010 after repeated engine failures.

Like Zukunft said, the service has been stripping the Polar Sea of parts to keep the Polar Star running, because many of those parts are no longer in production. When they can't get it from the Polar Sea, crew members have ordered second-hand parts from eBay.

The icebreaker makes a run to McMurdo Station in Antarctica every year. On its most recent trip in January, the ship faced less ice but still dealt with mechanical issues, including a gas-turbine failure that reduced power to the propellers and a failed shaft seal that allowed seawater into the ship until it was sealed.

Harsh conditions wear on the Polar Star — it's the only cutter that goes into drydock every year. It also sails with a year's worth of food in case it gets stuck. As commandant, Zukunft said the Polar Star was “literally on life support.”

The Coast Guard has been looking to start building new icebreakers for some time.

In 2016, Zukunft said the service was looking to build three heavy and three medium icebreakers. Along with the Navy, it released a joint draft request for proposal to build a new heavy icebreaker in October 2017.

The Homeland Security Department, which oversees the Coast Guard, requested $750 million in fiscal year 2019, which began October 1, to design and build a new heavy polar icebreaker. (That request included $15 million for a service-life extension project for the Polar Star.)

But the department is one of several that have not been funded for 2019, and it's not clear the icebreaker money will arrive, as lawmakers focus on other spending priorities, including a wall on the U.S.-Mexico border.

The $750 million was stripped by the House Appropriations Committee this summer — a move that was protested by House Democrats. The current Coast Guard commandant, Adm. Karl Schultz, said earlier this month that he was “guardedly optimistic” that funding for a new polar icebreaker would be available.

The need for Russian assets to support the U.S. in the high north would not be unprecedented, however.

When asked what infrastructure was needed in the Arctic to support U.S. national defense, Zukunft stressed that much of it, like ports, would be dual-use, supporting military and civilian operations.

“But the immediate need right now is for commercial , and that was driven home when we didn't get the fuel delivery into Nome,” Zukunft said, likely referring to a 2012 incident in which the Alaskan city was iced-in and a few weeks away from running out of fuel.

“At that point in time we were able to call upon Russia to provide an ice-capable tanker escorted by the Coast Guard cutter Healy to resupply Nome.”