Smoking marijuana on a boat in federally patrolled waters remains illegal, in spite of the recent decriminalization of pot in... 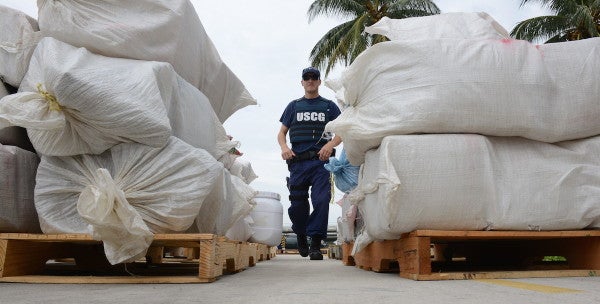 Smoking marijuana on a boat in federally patrolled waters remains illegal, in spite of the recent decriminalization of pot in New Hampshire and its legalization in Maine and Massachusetts, warned U.S. Coast Guard Petty Officer Andrew Barresi.

“The Coast Guard still enforces federal law, which has not changed,” Barresi said. “Federal law says it's illegal, in any quantities.”

And there's no exemption for medical marijuana, said Barresi about federal law, which supersedes state laws.

But if boaters are found with pot by members of New Hampshire or Maine Marine Patrols, they'll enforce state laws, including newly relaxed marijuana laws in both states, which share border rivers.

New Hampshire Gov. Chris Sununu on Tuesday signed a bill that reduces the penalty for adults' possession of up to three-quarters of an ounce of marijuana and five grams of hash, from a criminal misdemeanor to a civil violation, the equivalent of a parking ticket. The law takes effect in September.

Since Jan. 30, adult Maine residents can legally possess up to 2.5 ounces of marijuana and grow as many as six flowering pot plants.

But too few people know pot laws on land differ from laws on the water, Barresi said.

“It's important for people to know,” he said. “We don't want them to be surprised by it.”

Barresi said the Coast Guard's first priority is safety and to that end, “We do boardings all the time.” A boarding is when members of the Coast Guard go aboard recreational and commercial boats for inspections to ensure the presence of all required safety equipment, including life jackets and a sound-making device.

He said members of the Coast Guard are federal law enforcement officers and if they find marijuana during a boarding they'll seize and destroy it.

“They might think it's legal and their property,” Barresi said, “but it's not.”

He said members of the Coast Guard sometimes board boats at piers and docks, often after towing them to shore. Even at docks, he said, they'll enforce federal marijuana laws. He added if people think their marijuana on boats is legal or decriminalized, “they probably won't hide it.”

The Coast Guard spokesman said there are associated penalties that are determined at a later date at Coast Guard headquarters. Factors taken into consideration include the amount of involved marijuana and whether someone was under its influence while operating a boat, he said.

A typical penalty for possession of pot on a boat would be a fine, he said. Someone boating under the influence of any substance would be charged criminally, he said, “because we know it's deadly.”

People arrested by members of the Coast Guard are typically turned over to local law enforcement officers, he said.

Suspected smugglers aboard a go-fast vessel attempt to elude the Coast Guard off the coast of the Bahamas April 2, 2014.U.S. Coast Guard

The Coast Guard spokesman also noted New Hampshire Marine Patrol has personnel and boats at Portsmouth Harbor Station and “we work with state and local partners.”

But New Hampshire Department of Safety spokesman Lt. Jeff LeDuc noted Marine Patrol personnel do not enforce federal laws, so their response to finding marijuana on a boat would be consistent with state law. Maine Marine Patrol officials also enforce state law, so anyone over 21 with less than 2.5 ounces of pot on a boat caught by Marine Patrol will not be penalized, unless intoxicated by marijuana while driving a boat.

This could potentially lead to issues on the Pisctaqua River, where the New Hampshire-Maine border runs right down the middle of the river. In that case, the difference between decriminalization and legalization is governed by essentially a few feet.

Capt Tim Dunleavy of New Hampshire Marine Patrol said they have personnel patrolling as far north as New Castle and south to Hampton in the area. He said N.H. Marine Patrol also patrols, “on a regular basis,” Great Bay and inland bodies of water in Dover, Rochester and throughout the region.

Dunleavy said Marine Patrol personnel enforce boating laws, play a Homeland Security role and respond to search and rescues. Occasionally, he said, they also encounter people with drugs on their boats. He said members of his department will enforce the new state law on pot possession when it becomes effective 60 days after the July 18 passage.

Dunleavy said his officers are trained to judge marijuana weight by sight, but may employ scales if weight is questionable.