"These operations reiterate the significance of intelligence and resource sharing amongst our agencies." 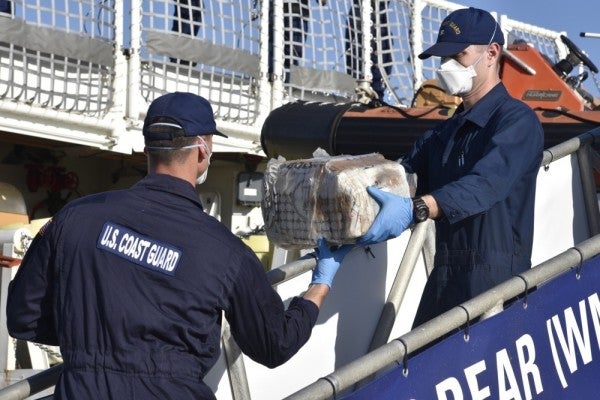 Two separate busts in the Caribbean late last month seized a total of $46.2 million in cocaine, according to the U.S. Coast Guard.

Nine people were arrested in the operations, and the Coast Guard says about 1,400 kilograms, or 3,086 pounds, of cocaine were confiscated.

On Jan. 24, the crew of the RFA Mounts Bay, a United Kingdom Royal Navy ship with U.S. Coast Guard law enforcement members and a Coast Guard helicopter on board, spotted two “go-fast” boats about 74 nautical miles south of St. Croix in the U.S. Virgin Islands, according to the Coast Guard.

The Mounts Bay launched a pursuit boat and the Coast Guard helicopter to stop the speed boats. Crews arrested seven men and confiscated 42 bales of cocaine.

On Jan. 30, the Coast Guard Cutter Bear, which is based in Portsmouth, Virginia, launched a patrol boat and helicopter to stop a speed boat southeast of Isla Beata, Dominican Republic. The Coast Guard arrested two men and seized 13 bales of cocaine.

Both operations were part of several ongoing international task forces patrolling the Caribbean for drug and migrant smugglers. The task forces include several nations, as well as multiple U.S. federal law enforcement agencies.

“These operations reiterate the significance of intelligence and resource sharing amongst our agencies,” A.J. Collazo, U.S. Drug Enforcement Administration Caribbean Division special agent in charge, said in a statement.

Between October and December 2019, the operations seized 12,060 kilograms of cocaine and 407 pounds of marijuana, with a combined value of $314 million.