In 2018, Coast Guard cutters seized 208 metric tons of cocaine worth an estimated $6.1 billion. 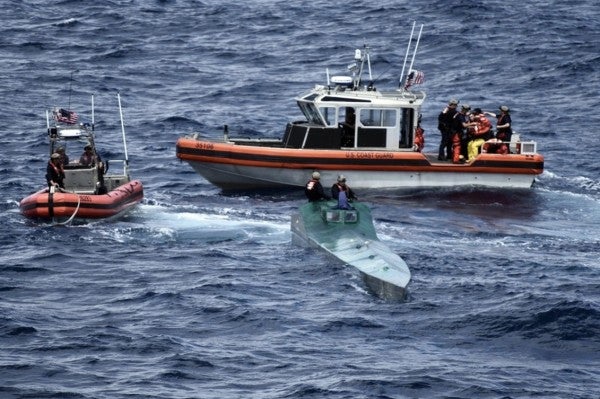 SAN DIEGO — The Coast Guard on Wednesday began unloading about 18,000 pounds of cocaine — with a street value of more than $312 million — at the 10th Avenue Marine Terminal that had been seized recently from smuggling vessels in the eastern Pacific Ocean.

The drugs were taken in several interdictions of low-profile go-fast boats and a self-propelled submersible known as a “narco submarine” found off the coasts of Mexico, Central America and South America by five Coast Guard cutters patrolling international waters, officials said. The seizures were made between mid-October and early December.

Coast Guard and Drug Enforcement Agency officials said the work done by the Coast Guard crews is important, not only because it keeps a large quantity of cocaine from reaching the United States, but also because it removes a revenue source from cartels that would likely be used to fund violent crime and other criminal enterprises such as human trafficking and arms trafficking.

“This cycle of justice disrupts the cycle of crime which, left unchecked, fuels violence and instability that corrodes our hemisphere's social and economic fabric and directly contributes to historically high drug-related deaths in neighborhoods across the United States,” Fagan said, according to video shot by Fox 5 San Diego.

The cocaine was transported to San Diego by the Coast Guard Cutter Bertholf, which participated in three of the seven seizures. “I'm deeply proud of the work of the men and women of Bertholf and what they've accomplished. This is lifesaving work that they are doing,” Fagan said.

The bundles of cocaine will be offloaded and turned over to federal agents who will investigate and prosecute drug traffickers.

U.S. Attorney Robert Brewer said one of his office's key missions is stopping dangerous drugs before they reach U.S shores. Stopping the flow of drugs helps in the “fight against cartels that selfishly peddle narcotics that indiscriminately kill people,” he said.

If the cocaine had not been seized, profits from drug sales would have helped fill drug dealers' bank accounts and endanger lives, Brewer said.

“What this crew does at sea in this world of drug interdictions very easily ends up in a federal district courtroom as evidence … and hopefully leads to a conviction,” he said.

DEA Principal Deputy Administrator Preston Grubbs said the load of cocaine piled high on the cutter's deck was a sobering reminder of how serious the drug problem is in the United States, where about one-fifth of the annual drug overdose deaths are from cocaine.

He said the 18,000 pounds of cocaine seized by the Coast Guard cutters was the equivalent to more than 163 million dosage units.

“Disrupting the maritime networks responsible for moving vast quantities of drugs on the high seas is one important way that DEA helps stop the flow of cocaine and other dangerous drugs to the United States,” DEA Acting Administrator Uttam Dhillon said in a statement. “The staggering amount of illegal drugs offloaded today is a testament to our strong interagency partnerships — in the U.S. and abroad — and the success that can be achieved when working together to stop this threat to our country.”