Officials are tracking a Russian spy ship that cruised up the East Coast to within 30 miles of the U.S.... 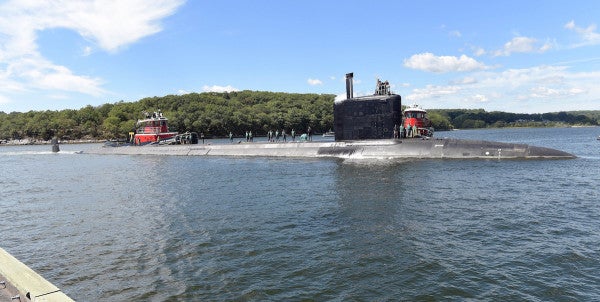 Officials are tracking a Russian spy ship that cruised up the East Coast to within 30 miles of the U.S. Naval Submarine Base in Groton Wednesday in what some lawmakers called another aggressive action from Russian President Vladimir Putin.

“A Russian spy ship patrolling 30 miles from the Groton sub base underscores that the threats posed by a resurgent Russia are real,” U.S. Rep. Joe Courtney, D-Conn., said in a written statement.

The U.S. Coast Guard said it is tracking the ship’s course, but would not disclose the precise location.

“The U.S. Coast Guard is aware of a Russian Federation-flagged vessel transiting international waters off the East coast of the United States, as we are of all vessels approaching the U.S. The ship has not entered U.S. territorial waters, which extend 12 miles out to sea,” the Coast Guard said in a statement. “We respect freedom of navigation exercised by all nations beyond the territorial sea of a coastal state consistent with international law. The Coast Guard continues to coordinate with federal agency partners to monitor maritime contacts operating in the vicinity of U.S. shores.”

The ship began the trip north along the coast from Havana, where it was photographed and is expected to return.

Lawmakers, noting recent incidents including Russian planes “buzzing” a Navy ship in the Black Sea, point to this ship’s actions as yet another aggressive Russian action.

“They are doing this obviously with aggressive intent to say the least. … This is part of a pattern of what’s going on right now, not just off the East Coast of the U.S., but overseas,” Courtney, whose district includes Groton, said on the House Floor Wednesday morning.

“We’ve been in touch with the Navy early this morning,” Courtney told The Hartford Courant after a speech on the House floor. “They are watching it like a hawk. At this point there’s not a violation of international waters. Unless that happens you aren’t going to see any aggressive push-back, but it’s something that has us on high alert.”

Two retired senior submarine commanders said Wednesday that in their opinions, such a Russian spy ship has little ability to pry into U.S. secrets and there is no reason for alarm.

“This for show,” said retired Rear Adm. Ron Thunman, former deputy chief of naval operations for submarine warfare. “I mean, what could that thing do to us? It doesn’t have anything special that I know of today — of course, I’ve been out of it for a few years — but don’t know of any specialized equipment that they could use to intercept out classified communications.

“The only thing they could get out of the radio circuitry is normal commercial traffic,” said Thunman, who played cat-and-mouse games with the Russians throughout his career as a commander of submarines and submarine groups around the world. “Any sort of classified traffic that we have goes by classified circuits and they can’t get into it.”

Thunman said reports of Russian military aircraft buzzing U.S. Naval ships elsewhere in the world is far more troubling than the presence of a Russian ship in international waters near New England.

Retired Cmdr. David Candler, who spent his career serving on and commanding submarines based at the U.S. Naval Submarine base in Groton, agreed.

“I wouldn’t make a mountain out of a mole hill,” Candler said. “It’s a ship, but it’s not the Great White fleet. And it is not uncommon for all kinds of ships from all kinds of places to be all over the world. A military ship up here all by itself is kind of unusual. But these kinds of ships — and we do the same thing — go all over the place to stay reasonably accustomed to the waters.”