An off-duty Coast Guard member‘s wedding day turned into a rescue mission after he saved a teen from the water.... 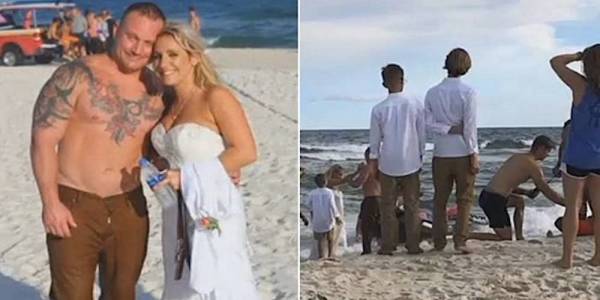 An off-duty Coast Guard member‘s wedding day turned into a rescue mission after he saved a teen from the water.

Petty Officer 2nd Class Zac Edwards was posing for photos with his new wife Cindy on Thursday in Orange Beach, Alabama, when a woman cried for help.

“A lady had come up to us and said that guy is out there struggling. He can’t get back, he’s having a hard time,” Cindy told WALA-TV.

“I wasn’t going to let him drown,” Edwards said.

Edwards raced to the water and approached the man with a flotation device.

Edwards pulled the man, identified as 18-year-old Jamel Robinson of Mississippi by the Daily Mail, toward the shore until he was unable to proceed due to the current. Then a lifeguard arrived to assist Edwards.

“I didn’t really take in the gravity of the situation until I laid down that night,” he told Good Morning America. “Afterwards my hands were shaking but the adrenaline was just pumping.”

“This is another example of the dedication our members have in service to the people of their nation,” said Capt. Malcolm McLellan, the Commander of Coast Guard Sector Mobile. “It shows the true character of a Coastguardsman with a bias for action.”

Cindy Edwards said she got a package deal.

“Hero and hubby in the same day,” she said.

The Edwards say they spoke to the family of the young man from Mississippi. He’s doing fine, a little sore but back to work, they said.