Incidents tend to rise in the summer. Our friends at Popular Science flew in a big MH-60T chopper and watched dramatic practice scenarios unfold first-hand. 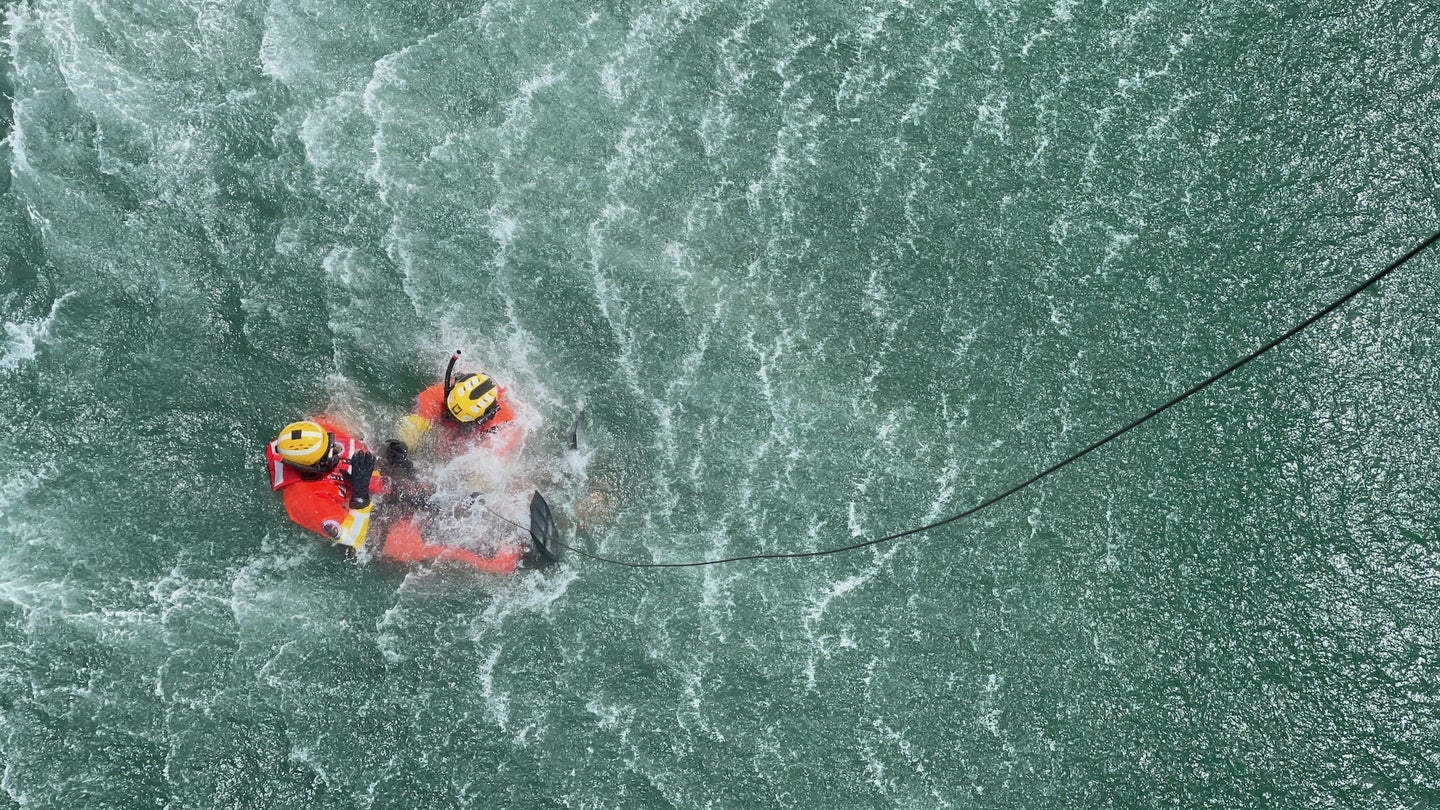 Two members of the Coast Guard, Michael Judin and Chris Moore, in the midst of a practice rescue scenario beneath a helicopter in May, 2021. (Rob Verger/Popular Science)
SHARE

The duck was dressed for the ocean below. Clad in an orange dry suit, black gloves and flippers, and a yellow helmet with goggles and a snorkel attached, he was prepared to leave our hovering helicopter for the first time and enter the water.

The large red and white Coast Guard chopper featured a crane-like hoist outside and above its big side door. With the hook from its dangling metal cable attached to him, the duck moved into the open doorway, his legs and flippers hanging off the side. Then the hoist pulled him up and out, and—after a thumbs-up from the duck—lowered him out of sight and into the sea. Not long later, the hoist returned, its hook empty. It was like the reverse of catching a fish. A creature went into the ocean on a hook, and the line returned with nothing on it.

To be clear, the duck was a human being named Michael Judin, an officer with the Coast Guard. “The duck” is the term they use to describe the person who simulates being a survivor out in the water, giving the helicopter team a chance to practice plucking individuals out of the wet stuff and back up into the bird, which hovers above.

Rescuing someone via a helicopter and its hoist is an especially dramatic and effective way for the Coast Guard to grab someone in distress at sea. We were flying that day in late May 2021 out of an air station on Cape Cod, Massachusetts. From that location alone, the Coast Guard says they’ve used aircraft to save more than 200 lives over the past three years—either via a chopper, like the MH-60T Jayhawk we dropped Judin from, or a fixed-wing airplane known as the Casa. Commander David McCown, the air station’s executive officer, estimates hoist rescues happen roughly once a month. In June, for example, a helicopter out of Massachusetts grabbed three people off a life raft after their fishing boat sank near Montauk Point, New York. And in mid-July, a Jayhawk plucked another three from a capsized trimaran in the waters around Portsmouth, New Hampshire.

The flight I tagged along for was an evaluation ride for one of the pilots, Lt. Commander Rob McCabe, but more generally served as a chance for the crew to practice the high-stakes, highly dynamic techniques of hoisting people into a helicopter or tending to a boat in distress. Here’s what it was like to fly with them for the day.

Read the rest of this story at Popular Science