Editor's Note: This article by Hope Hodge Seck originally appeared on Military.com, the premier source of information for the military and veteran... 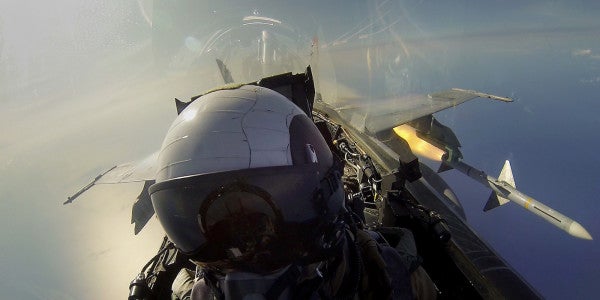 Editor's Note: This article by Hope Hodge Seck originally appeared on Military.com, the premier source of information for the military and veteran community.

The U.S. Navy has yet to solve a troubling pattern of hypoxia-like symptoms in the cockpit among pilots of F/A-18 Hornet variants and EA-18G Growler aircraft, and the head of naval aviation said this week that resolving the dangerous problem is his top safety priority.

Vice Adm. Mike Shoemaker, the commander of Naval Air Forces, told an audience at the Center for Strategic and International Studies this week that Marine Corps and Navy aviation leaders were pushing forward with a multi-pronged approach that included better training for pilots and a close analysis of apparent problems with the onboard oxygen generation system.

“Where cabin pressurization has issues, we've adjusted the warnings we get in the cockpit and adjusted the emergency procedures for how we respond to various scenarios,” Shoemaker said. “We've been out to the fleet to talk about how to test, how the maintainers work and maintain those systems.”

Incidents of reported oxygen loss, cockpit depressurization and air contamination among Navy and Marine Corps pilots have steeply risen in recent years. Navy Times reported in May that 2015 had seen the highest number of these kind of reports in at least six years, with 103 reported Navy incidents and 12 reported Marine Corps incidents. Since 2009, the paper reported, there have been 424 hypoxia-related incidents reported by Navy pilots and 47 by Marine Corps pilots.

Shoemaker suggested that the bump in reporting could actually be a function of heightened awareness, rather that more incidents occurring.

“So guys are going back and saying, 'Look, there's nothing wrong with reporting this.' We need to make sure we understand all the failure modes. So I think we're doing a good job of that,” he said.

In the fleet, he said, pilots in training now spend time in aircraft simulators in which oxygen levels are gradually degraded so they can learn to identify the symptoms associated with hypoxia. Navy leaders have also spoken with pilots to draw attention to the problem and encourage them to make reports, he said.

On the engineering side, NAVAIR personnel are working to better understand the onboard oxygen generation system and potential problems.

“There are some contaminants in the system that we're still struggling with a little bit, but the engineers are figuring out ways to filter and identify that,” Shoemaker said.

Shoemaker said the Navy expected to introduce a new technology to the fleet soon that would “scrub” the air delivered to the cockpit and remove these kinds of contaminants. And to address cabin pressurization problems, he said, engineers have adjusted cockpit warnings and emergency response procedures to alert pilots to issues sooner and give them more time to respond.

In July, executives with Cobham Plc., the maker of the Super Hornet's onboard oxygen generation system, told Military.com the company is also developing a system with input from the Air Force and Navy that would monitor pilots' breathing and other physical indicators to alert them to potential cockpit oxygen issues sooner.

“We're putting a full court press on this,” Shoemaker said of efforts to address the cockpit problems. “It is our number one safety issue. [But] with awareness across the fleet and the importance of just understanding emergency procedures and complying with those, I think it's manageable.”