We Salute The Wounded Warrior Who Helped Gen. Colin Powell After His Tire Blew On The Way To Walter Reed

When Gen. Colin Powell's tire blew, a wounded Army veteran pulled over to help him — and reminded him "what this country is all about 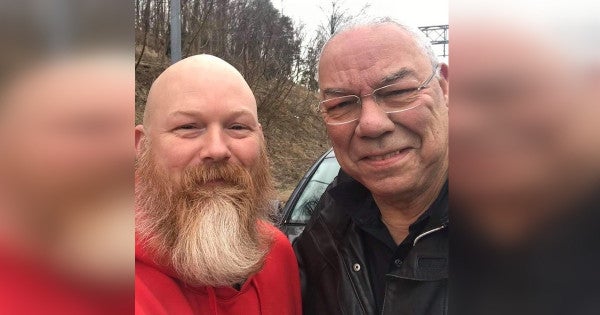 Good Samaritans come in all shapes and sizes, but if you're retired Gen. Colin Powell, you'll get an Army vet with a prosthetic leg and a sick beard to help you out of a jam.

The former Secretary of State and retired Army general wrote on Facebook on Thursday that after his tire blew out on the interstate while his way to an appointment at Walter Reed on Wednesday, a stranger pulled over in front of him offered assistance.

That man was Anthony Maggert, an Army veteran lost his leg in Afghanistan. Although Powell wrote that Maggert was a civilian contractor, the veteran told CNN that he had served as a contracting officer in the Army before leaving the military in June 2018.

Maggert “grabbed the lug wrench and finished the job,” and the two went their separate ways — but not before Maggert requested a selfie with the retired four-star, because, well, wouldn't you?

Powell later received a message with their photo, in which Maggert told Powell that he'd always inspired him, and was “the giant whose shoulders we stood upon to carry the torch to light the way.”

Powell said in his post that Maggert reminded him “what this country is all about and why it is so great.”

“Yesterday was a reassuring day for me. I was on my way to Walter Reed Military Hospital for an exam. As I drove along Interstate 495 my left front tire blew out. I am a car guy and knew I could change it but it was cold outside and the lug bolts were very tight. I jacked the car up and got several of the bolts removed when a car suddenly pulled up in front of me. As the man got out of his car I could see that he had an artificial leg. He said he recognized me and wanted to help me. We chatted and I learned that he lost his leg in Afghanistan when he worked over there as a civilian employee. He grabbed the lug wrench and finished the job as I put the tools away. Then we both hurriedly headed off to appointments at Walter Reed. I hadn't gotten his name or address but he did ask for a “selfie”. And then he sent me the message below last night.

'Gen. Powell, I hope I never forget today because I'll never forget reading your books. You were always an inspiration, a leader and statesman. After 33 years in the military you were the giant whose shoulders we stood upon to carry the torch to light the way and now it is tomorrow's generation that must do the same. Anthony Maggert'

Thanks, Anthony. You touched my soul and reminded me about what this country is all about and why it is so great. Let's stop screaming at each other. Let's just take care of each other. You made my day.”