Convicting A Colonel: Even At Trial, Accommodations Made For Rank 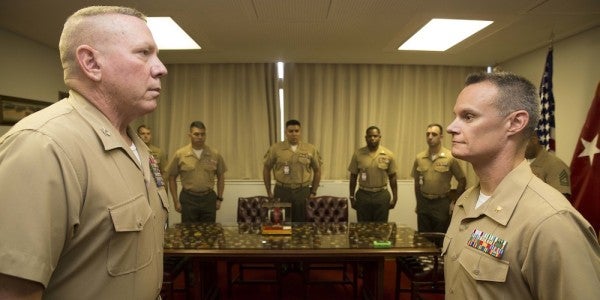 Every time Marine Col. Daniel Wilson entered the small courthouse building aboard Camp Lejeune, North Carolina, this year for a trial date or motions hearing, he was accompanied by an escort team of “chasers” that included a full-bird colonel, specially trained and sidelined from ordinary duties for the express purpose of bringing Wilson into court.

In fact, Wilson's court-martial on charges of child sexual assault and abuse required a team of roughly a dozen East Coast-based Marine colonels on a rotating basis to accompany him to the court from the Camp Lejeune brig, where he had been confined since January; supervise the removal and application of his handcuffs; and remain in the courtroom through long legal proceedings as a security measure.

The role of brig chaser is typically undertaken by enlisted Marines, but Wilson's case — an extremely rare instance of a senior seven-year colonel standing trial for a serious criminal offense — was seen to require special accommodation.

The colonels were added to Wilson's chaser team “out of respect for the rank of the accused,” a spokesman for II Marine Expeditionary Force, Lt. Col. Michael Armistead, told Military.com.

As in civilian court, military defendants are entitled to trial by a jury of their peers. But in the military, the term takes on a more stringent meaning.

According to the Uniform Code of Military Justice, military juries are supposed to be without members who are junior to the defendant in rank or grade.

For Wilson, that meant seating a jury that included three senior colonels, four one-star generals, and a two-star general who presided over the panel.

Seating the members, and dismissing potential jurors who had a personal relationship with Wilson or another conflict that would affect their impartiality, took a marathon full-day court session.

“It a challenge,” Armistead said. “The convening authority found a number of qualified candidates but also worked to ensure the release of information about the case was such that it would ensure the impartiality and fairness of the panel.”

In all, at least 15 colonels — more than 2 percent of all O-6s serving in the Marine Corps — were taken from their jobs for some period of time to facilitate Wilson's trial.

Senior military rank may bring with it special accommodations, but officials maintain the administration of justice was not affected by Wilson's seniority, nor was his treatment while awaiting trial.

“He receive the same accommodations at the brig as the other detainees,” Armistead said.

Wilson appeared for his trial unshackled, his handcuffs removed outside the court building during the actual court-martial and in the lobby of the building for pretrial motions hearings. But Armistead said this is a step taken with all defendants to ensure jurors never see the accused in shackles.

Handcuffs in the courtroom itself are deemed “prejudicial to the accused and decorum of the court,” he said.

As for the time Wilson actually spent in the brig, opinions differ.

Wilson's civilian attorney, Phil Stackhouse, complained in a written statement to media outlets that the review officer who approved the decision in January to send Wilson to the brig was “not neutral and detached” and deliberated less than two seconds before remanding the colonel to pretrial confinement.

Wilson had been initially charged with child sex assault and abuse and various specifications of conduct unbecoming an officer in November 2016.

He was sent to the brig after additional allegations of sexual assault, and an unauthorized absence charge, emerged months later.

A former Marine Corps attorney, retired lieutenant colonel James Weirick, told The Daily Beast that Wilson should have been sent to the brig when he was originally charged.

“The charges were serious enough to warrant the decision for pre-trial constraint,” Weirick told the publication. “For him not to be placed in the brig just shows the lack of legal expertise by the convening authority.”

“You have to show flight risk and the likelihood of more misconduct,” Bouffard told Military.com. “Even in case, it's not unusual for somebody not to be put in the brig.”

Bouffard was surprised over Wilson's sentence: five and a half years behind bars for child sexual abuse and a slew of counts of conduct unbecoming an officer.

The child abuse charge alone carries with it a maximum sentence of 15 years.

“I tend to think based on sentences that I've seen, it's hard to believe that somebody would just get five years for this if they were sporting stripes on their sleeve,” he said.

Wilson had pleaded not guilty to all charges, and Stackhouse told Military.com in a statement that the impact of the sentence he received was “devastating.”

“We believe that the worked extremely hard and were very considerate in their deliberations, and we respect their verdict,” he said.

“However, many things took place outside of their presence regarding evidence that was allowed or kept from the members that will be the subject of a considerable appeal,” Stackhouse said.