A Marine serving in one of the service's highest-profile positions was admonished after hazing claims emerged when he took a lighter to subordinates' collars to burn threads from their uniforms — while the Marines were wearing them. 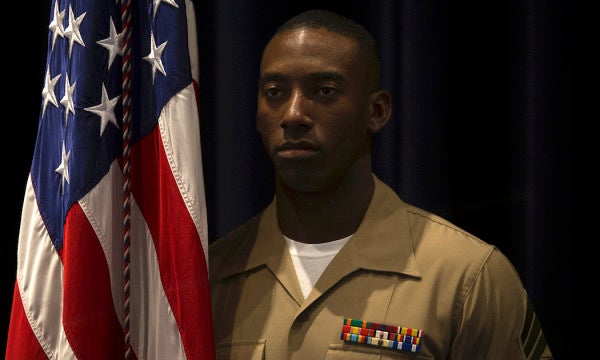 A Marine serving in one of the service's highest-profile positions was admonished after hazing claims emerged when he took a lighter to subordinates' collars to burn threads from their uniforms — while the Marines were wearing them.

Sgt. Francis Frazier, the 38th Color Sergeant of the Marine Corps, was the subject of an investigation after complaints were filed last year that he had “maliciously burned two junior Marines,” according to a 20-page report Military.com obtained through a Freedom of Information Act request.

Frazier, who serves as the Marine Corps' most senior sergeant, representing the service at high-profile events across the country, was ultimately cleared of any hazing allegations after investigators found he hadn't intended to harm his Marines. But his uniform inspection tactic was found to have been done in poor judgment — a “leadership failure,” documents state.

The complaints date back to an April 16, 2018, inspection for members of the Marine Corps Color Guard Platoon. Frazier leads the Marines who present the American and Marine Corps flags at high-profile events in Washington, D.C., and across the country.

Frazier told investigators he repeatedly took lighters to his Marines' collars during inspections to get rid of loose threads on their uniforms. When another Marine, whose name was redacted from the report, saw Frazier doing so, he told the color sergeant it was a “crazy” thing to do.

Frazier again went in with the lighter to remove the thread, and the Marine asked what his first sergeant would think of the situation, according to the investigating officer's report.

“Sgt Frazier responded that he thought would have his back and continued to try to remove the ,” the investigator wrote. “At that point, he accidentally burned the Marine's neck slightly. Sgt Frazier did not believe that this was serious and went about his business.”

Officials at Marine Barracks Washington, where the Color Guard Platoon is based, stressed that the investigation into Frazier's behavior determined that no hazing occurred. The complaints made against him were unrelated to hazing allegations made later that year against members of the Silent Drill Platoon, which is also based at the Barracks.

That case resulted in three Marines being booted from the service and two others being punished after a witness reported seeing members of the revered demonstration unit using a training rifle to strike someone.

The Marine Corps did not respond to several questions about Frazier's case, including whether those who said they were burned by his uniform checks are still in his charge and how the investigation led the sergeant to change his inspections or leadership style.

They also did not answer questions about whether use of a lighter is prohibited during uniform checks.

The practice of burning loose threads from a uniform is not new. There are several threads on Reddit, a social media site, that include tips on how to burn off loose threads from freshly dry-cleaned military uniforms — including fixes for those who got too close with the lighter, burning holes in their blouses or trousers.

It was Frazier's decision to burn the threads from his Marines' uniforms while they were wearing them that was brought into question.

One of the Marines involved told the investigating officer that Frazier held a lighter near his collar three times during the April 2018 inspection, even as another Marine in the room questioned the practice. It was on the third time Frazier took the lighter to his collar that the Marine said he felt “a hot pain against his neck.”

The burn didn't leave a mark, he told the investigator, but it was uncomfortable for the next few hours.

When Frazier was questioned about the method, he told investigators the person was “the ringleader of an attempt to discredit him and put his authority under question,” the report states.

The Marine whose neck was burned said he didn't believe that Frazier acted with malicious intent, but called what he did “unusual and not the right way to approach the situation,” according to the report.

Frazier told the investigating officer his Marines had “underperformed” on their past uniform checks, “requiring multiple inspections” to get it right. When he noticed a loose thread on one of the Marines' collars, he admitted to holding a lighter near the person's neck. But it wasn't for an extended amount of time and the Marine showed no signs of discomfort, he said, according to the investigator.

Ultimately, Frazier did not intend to harm his Marines, the investigating officer found.

The sergeant “exercised poor judgment in causing minor physical harm to one of his Marines,” the officer wrote. But that did not amount to hazing, the officer added, which the Marine Corps defines as causing another service member to suffer or to be subject to cruel, abusive, humiliating, oppressive, demeaning or harmful activity.

The investigator recommended Frazier receive a non-punitive letter of caution, which does not get added to a Marine's official record. The officer also recommended a brief stand-down with members of the Color Guard “to talk about the situation, repair the relationships that were damaged, and discuss the appropriate way to address issues which may develop into a hazing situation.”

Col. Joseph Murray, commander of Marine Corps installations in the national capital region, reviewed the investigation, according to the documents, and agreed that Frazier should receive a non-punitive letter of caution to “address his leadership failure in handling the legitimate concern of a subordinate about the risk to harm another.”

By not wanting to admit he was wrong when another Marine questioned his inspection method, Murray said Frazier “further exercised poor leadership when he continued to use the technique … to assert his authority of subordinates.”

“Nonetheless,” he added, “I am satisfied that Sergeant Frazier's conduct does not amount to hazing.”