"What Mr. Chavez did to me would be wrong to do to any mother. He took my future, my hope, he stole my reason for living. And that is not right." 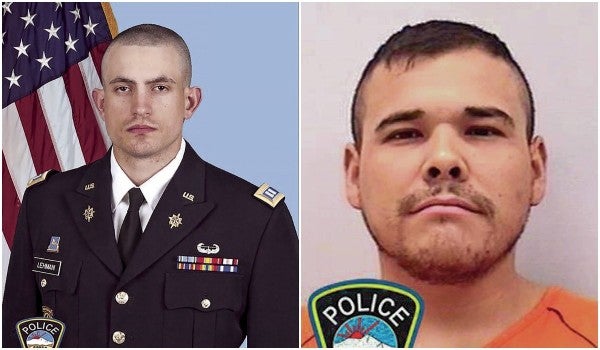 COLORADO SPRINGS, Colo. — A jury found Gilberto Chavez Jr. guilty of second-degree murder in the case of Capt. Daniel Lehman, a U.S. Army officer from Santa Fe who was shot dead in downtown Colorado Springs a little over a year ago.

The 12 jurors who considered the case behind closed doors for about seven hours Tuesday came back with a conviction Tuesday following a trial that lasted more than a week.

Chavez, who police suspect was high on methamphetamine at the time of the killing, faces up to 82 years in prison.

Lehman, 28, grew up in Santa Fe and was a military intelligence officer stationed at Fort Carson. Police found his body at the end of a trail of blood around 7 a.m. Sept. 15, 2018. They believe he was attacked earlier that morning some blocks away.

About a month later, police arrested Chavez and charged him with first-degree murder. Police said Chavez believed someone was following him as he was walking in downtown Colorado Springs. They said Chavez, now 28, shot Lehman with a .22-caliber revolver.

Under Colorado law on second-degree murder convictions, Chavez had to undergo two more phases of the trial to consider other charges against him, including two counts of weapons possession by a felon. On Tuesday, the jury also found him guilty on those counts as well as a violation of his bail bond terms.

Sentencing will not take place until one final phase, scheduled by Colorado 22nd Judicial District Judge William B. Bain for Nov. 1, at which prosecutors will present evidence that Chavez is a habitual offender.

The trial's outcome brought relief to Lehman's parents, Laurie Lehman of Albuquerque and Danny Lehman of Santa Fe, both of whom were in attendance for the verdict.

Laurie Lehman, clearly emotional after the murder verdict was read, said, “I am everyone's mother, could be anyone's mother, and what Mr. Chavez did to me would be wrong to do to any mother. He took my future, my hope, he stole my reason for living. And that is not right.”She said it was difficult to sit through the trial listening to testimony and “seeing the pictures of my son lying dead.”

Danny Lehman told The New Mexican the outcome renewed his faith in the judicial system. He shook the hand of every juror and thanked them as they filed out of the courtroom following the verdict.

Despite the outcome of the case, he said, “We had already lost.”

Chavez did not testify during the trial. His attorney, Matthew Barringer, told The New Mexican he will no longer represent Chavez but thinks Chavez may appeal using a public defender.

The jurors made several requests during Tuesday's deliberations, including to once again review a copy of report by a state psychiatrist who testified that Chavez would not speak to him during a mental health evaluation and who said Chavez has no mental illness and was not intoxicated to the extent that he was unaware of his actions at the time of the shooting. Though that request was denied, that testimony played a key role in the prosecution's case.

Daniel Lehman's death had come as a shock to those who knew him. Born Feb. 6, 1990, he had emerged early on as a bright light in Santa Fe. In 2002, when he was just 12 years old, he was named one of the Santa Fe New Mexican's Ten Who Made a Difference for volunteering at local libraries and at El Castillo retirement home in downtown Santa Fe.

“I get to do something I like to do and at the same time I get to give something special to someone else,” he told an interviewer that year.

The St. Michael's High School graduate developed an early interest in travel, history, culture, math and chess. At home, he would spend hours patiently explaining math concepts to his younger brother, Jonathan Giles Lehman, who died in an accident in Alaska in 2012 at age 21.

Lehman took a year off from St. Michael's to live with a family in China and learn Mandarin. Upon returning, he told his parents he wanted to attend the U.S. Military Academy and become an Army officer. Nominated to West Point by several New Mexico politicians, Lehman graduated in 2012 with a double major in nuclear physics and philosophy.

After graduation, Lehman was commissioned as a second lieutenant in the Army and assigned to its military intelligence branch. He served in Afghanistan in 2013 and was later promoted to captain. After spending a year in Eastern Europe, he was stationed at Fort Carson as part of the 4th Infantry Division's 3rd Armored Brigade Combat Team.

Prosecuting attorney Andrew Vaughan said he was pleased with the verdict. “It's a big day for the family,” he said. “They got justice for their son.”

But he expressed dismay that Chavez, who did not react when the verdict was read, had shown no remorse for killing Lehman.

Referring to a new tattoo that Chavez sports depicting the outline of a body as if it were part of a crime scene — which police believe was a boasting reference to killing Lehman — Vaughan said, “The tattoo on his back was a celebration of his murder of Captain Lehman that I have no words for. I think that shows a lack of remorse.”