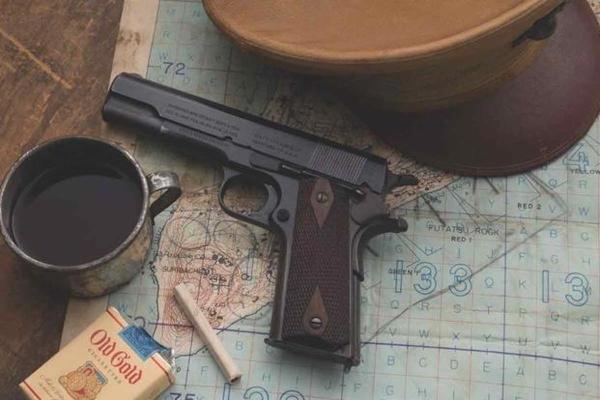 Rock Island Auction Company will soon be taking bids for the 1911 Colt .45 automatic pistol, and other kit, carried by a decorated Marine combat photographer during the Battle of Iwo Jima in World War II.

One of the lots, number 1516, will feature items such as the sidearm, pistol belt rig and rare Iwo Jima battle map that belonged to Marine Sgt. Arthur J. Kiely Jr., who passed away in 2005, according to a recent news release from the auction company.

Kiely joined the Marine Corps in 1943 and served as a combat photographer, taking pictures under heavy enemy fire on island engagements such as Iwo, the release states.

Kiely's Colt 1911 was originally shipped to the Marine Corps in 1917 and features “85% of its original blue finish showing a mixed brown and gray patina on the grip straps and trigger guard, bright edge wear, and mild spotting and handling marks overall,” according to the auction's website.

The pistol's refinished grips have some “dents and tool marks on the screws” and the “modified, refinished replacement trigger sticks a bit,” the website states.

Also significant, it appears that Kiely may have used his pistol in direct combat.

Kiely was awarded a Bronze Star for his bravery during fighting in the Marianas Islands from June 15 to Aug. 12, 1944, when as a corporal, he stopped taking photographs during the battle and “personally killed at least three enemy,” according to the award citation that is included in the collection.

“It's an honor to have this pistol in house,” Kevin Hogan, president of the auction house, said in the release. “I can't imagine a better time for it to be offered than just after the 75th anniversary of the battle.”

The Kiely collection also features a “Special Air and Gunnery Target Map” of Iwo Jima dated Nov. 12, 1944, that was used in preparation for the coming battle.

The 1:10000 scale map measures 27.75 inches wide and 39.75 inches long with more than 30 defense symbol keys that identify likely installations, bunkers, artillery and machine guns, according to the website.

Marine Gen. Holland “Howlin' Mad” Smith, the father of modern U.S. amphibious warfare, presented the map to Kiely, and it became one of his most valued possessions, according to the auction house release.

Another item in the collection is the pistol belt rig that Kiely wore during his service. The issue web belt is outfitted with the standard leather flap holster, canvas magazine pouch with two 1911 magazines, field dressing pouch, canteen and canteen cover, according to the website.

“The map, the pistol and the holster rig are kind of the stars of the show,” Joel Kolander, spokesman for the auction house, told Military.com.

Kiely's collection also includes his Marine Corps pith helmet, M1 helmet with camo cover and other kit, as well as a number of photos he took during the war, including one of “him wearing that pistol rig with that gun in it,” Kolander said.

Kiely sold many items up for auction to a collector in 2001 before he died four years later, he added.

The Premier Firearms Auction will be open to the public, but it will also be live-streamed, Kolander said, adding that thousands of people will likely file absentee bids before the auction. For more information about the event, visit the auction house's webpage for the event.

Kiely's collection will not be cheap, though, Kolander said, who added that the bidding will range between $35,000 and $55,000 for the entire lot.

“A high-condition Colt 1911 — especially 1917 shipped — people would already be paying, you know, four figures for a pistol like that,” he said.