"This is a work of art, and it works better than anything else on the market today" 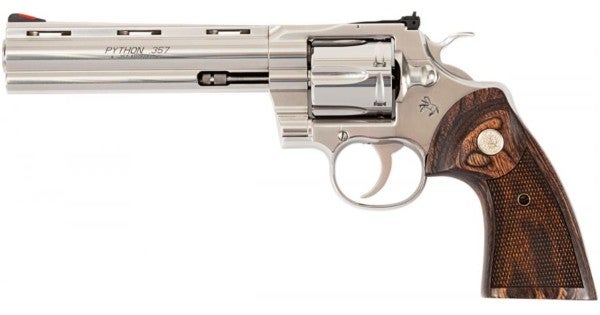 LAS VEGAS, Nevada — Range day at SHOT Show 2020 was filled with the latest pistol technology from Glock to Springfield Armory, but the handgun that stood out this year was a Colt six-shooter that dominated the silver screen in the 1970s.

Colt Manufacturing Company LLC showed off the reintroduction of its .357 Magnum Python revolver, an icon that disappeared from the market 18 years ago.

“The public has been asking for years and years for us to bring it back; not only did we bring it back, but it's better than the original,” Mark Redl, law enforcement manager for Colt Firearms, told Military.com.

Using modern machining and metals, “it's actually 30% stronger than the earlier one,” Redl said.

Colt's reintroduction of the Python revolver comes just a few months after the gunmaker decided to suspend its production of civilian AR-15s because the market has become flooded with firms that manufacture the popular semi-automatic rifle.

The Python was the flagship of Colt's revolver market, produced from 1955 to 2002. But the Python truly became a legend in the 1970s when actor David Soul first wielded a four-inch barreled version of the powerful handgun in the 1973 Clint Eastwood movie “Magnum Force.”

Soul went on to carry a Python with a six-inch barrel for his role as Hutch in the hit TV series “Starsky and Hutch,” which ran from 1975 to 1979.

The new Python comes in two versions, one with a 4.5-inch barrel and one with a six-inch barrel. The barrels are machined from one piece of stainless steel and the trigger has been improved over the original design, Redl said.

“We've actually reduced the number of parts in the action,” he said. “We did that so we would get a better trigger pull every time you pull the trigger.”

I have never loved the long pull of a double-action trigger, but the Python's trigger feels as smooth as whipped butter.

“This is a work of art, and it works better than anything else on the market today.”