Combat-Tested Marine Cobra Pilot Selected To Be An Astronaut 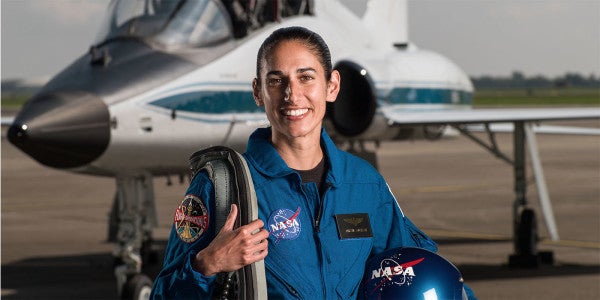 Marine Maj. Jasmin Moghbeli's grade school dream of becoming an astronaut has wavered only once: during her combat deployment to Afghanistan as an AH-1W Super Cobra pilot from 2009-10.

“Had I been offered to leave and go be an astronaut, I don't know that I would have said yes at that time,” Moghbeli told Military.com in a June interview, “because I loved what I was doing in that moment.”

Regardless, Moghbeli said, the dream has served as a guiding force throughout her distinguished 12-year Marine Corps career, shaping her plans and giving added purpose to years of intensive work and study.

Last month all of that work came to fruition. NASA announced that Moghbeli would be one of 12 astronaut candidates selected to undergo a two-year training and evaluation period for entry into the 58-year-old astronaut program.

When Moghbeli got the news, she immediately called her parents, her hands shaking with excitement and disbelief.

“They were at a pizza place when I called them and was crying so much he couldn't even drive home,” she said. “So I think that says something about how much it meant to me and my family.”

Moghbeli, 33, has seldom taken the easy path. She was born in Germany to Iranian parents, Fereshteh and Kamy Moghbeli, who moved to the United States when she was eight months old. She grew up in Baldwin, New York, and remembers first knowing she wanted to become an astronaut in the sixth grade.

“I did a report on Valentina Tereshkova, the first female in space, a [Russian] cosmonaut. I think the reason I chose her was I was pretty adventurous, but I always loved math, I always loved science, even as a little kid,” Moghbeli said. “And then we got to dress up as the person, I had my little space suit and it just kind of, as a little kid, fanned the flames of getting me excited about space exploration.”

After high school, Moghbeli had initially planned to attend the U.S. Naval Academy, but then was offered a spot at the world-class Massachusetts Institute of Technology, where she earned a Bachelor's Degree in Aerospace Engineering.

After school, Moghbeli knew she wanted to pursue military aviation, a common gateway for NASA selectees. At a career fair her junior year, she learned about a Marine Corps leadership program that allowed college students to attend Officer Candidates School over the summer with no military obligation. She went that summer before starting her senior year, and she knew her path was set.

In the Marine Corps, Moghbeli eventually trained on Super Cobras, ultimately completing three deployments with the twin-engine attack helicopter. She was deployed twice aboard ship with the 13th and 31st Marine Expeditionary Units, and in 2009 was sent to Camp Bastion, Afghanistan in Helmand province with Marine Light Attack Helicopter Squadron 367, nicknamed “Scarface.”

The deployment proved a busy one.

“We did lots of different stuff, of course close air support — as an attack helicopter pilot, that's the bread and butter — but escorts on the ground and for other aircraft that don't have defensive weapons capabilities, doing reconnaissance missions, and just overhead support of the patrols going out so several different missions sets,” she said.

In the Afghan desert, the dream of being an astronaut seemed a distant one. But Moghbeli was still biding her time and building her skill sets.

“I didn't think I was ready yet and I had what NASA was looking for,” she said. “I kind of waited until I was like, 'all right, I've got what I think they're looking for, so I'm going to apply this time.'”

After a 2012 deployment to Okinawa, Moghbeli was accepted into U.S. Naval Test Pilot School, undergoing training and eventually receiving an assignment to her current post as quality assurance and avionics officer for Marine Operational Test and Evaluation Squadron 1 in Yuma, Arizona.

When NASA opened its application process most recently, in December 2015, she knew she was ready to apply. It began with a surprisingly simple USA Jobs application, she said. But then the interview rounds began at Johnson Space Center in Houston, Texas. The first lasted three days; the second a week. Already, she said, she was developing close bonds with her fellow candidates and the space center staff.

When news arrived that Moghbeli had made the cut, her squadron responded by affectionately pranking her, wrapping her desk with streamers and ribbons.

“There were signs posted all over the squadron saying, 'to her it is rocket science,'” Moghbeli said. “It's been cool.”

Moghbeli knows she wants to go to space someday, but she is also fascinated by NASA's human factors research and ongoing efforts from commercial companies, including Boeing and Space-X, to send Americans to space on commercially crewed vehicles. Apart from all that, she's excited about participating in outreach to children, who may have big dreams like she did.

“I think as an astronaut you can have that much more impact on future generations and I'm really excited about that,” she said.

Moghbeli joins a long tradition of Marine Corps astronauts that dates back to the very first astronaut class in 1959 and the legendary Marine Col. John Glenn. She said she continues to cherish her Marine Corps identity and hopes she can continue to add to the legacy.

“Becoming an astronaut, it's something that, yes, it's going to require a lot of hard work and dedication, but there's a lot of luck involved at the end of the day. So it's not something you can bank on getting,” she said. “I never did anything where, had I not gotten a shot, I wouldn't have been happy doing what I'm doing.”